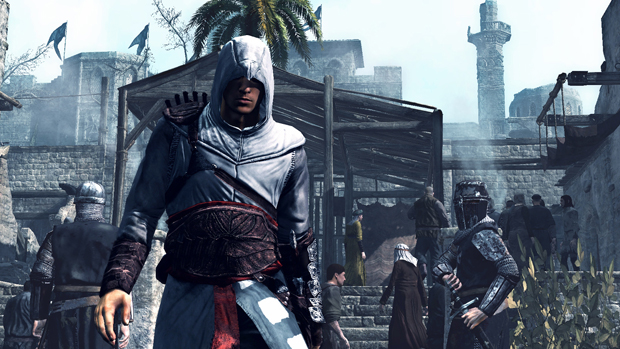 That’s our pal, the ESRB, for you. Dude never could keep his mouth shut. That’s cool — it’s not like he’s trying to be a bragger or anything. It’s just that he knows stuff earlier than the rest of us.

This is almost as good as confirmation of an upcoming Assassin’s Creed DS game, which we now know is a side-scrolling action game. The ESRB rates it “Teen” and calls it violent. Want to know what Assassin’s Creed II: Discovery is about? Check out the ESRB’s description:

This is a side-scrolling action game, set during the Renaissance, in which players assume the role of an assassin fighting against an enemy group known as the Templars. Players traverse rooftops and alleyways, employ stealth attacks to kill targets, and engage in combat by using swords and throwing daggers. The stealth attacks represent the most intense instanced of violence and usually require players to sneak up on targets unnoticed. When players stab enemies in the back or chest, a blade unsheathing noise can be heard as the target falls to the ground and disappears.

It sounds like…Assassin’s Creed. We appreciate the detail on the unsheathing noise. Way to be descriptive.

Now that you know what Assassin’s Creed II: Discovery is, is it something you’re looking forward to?