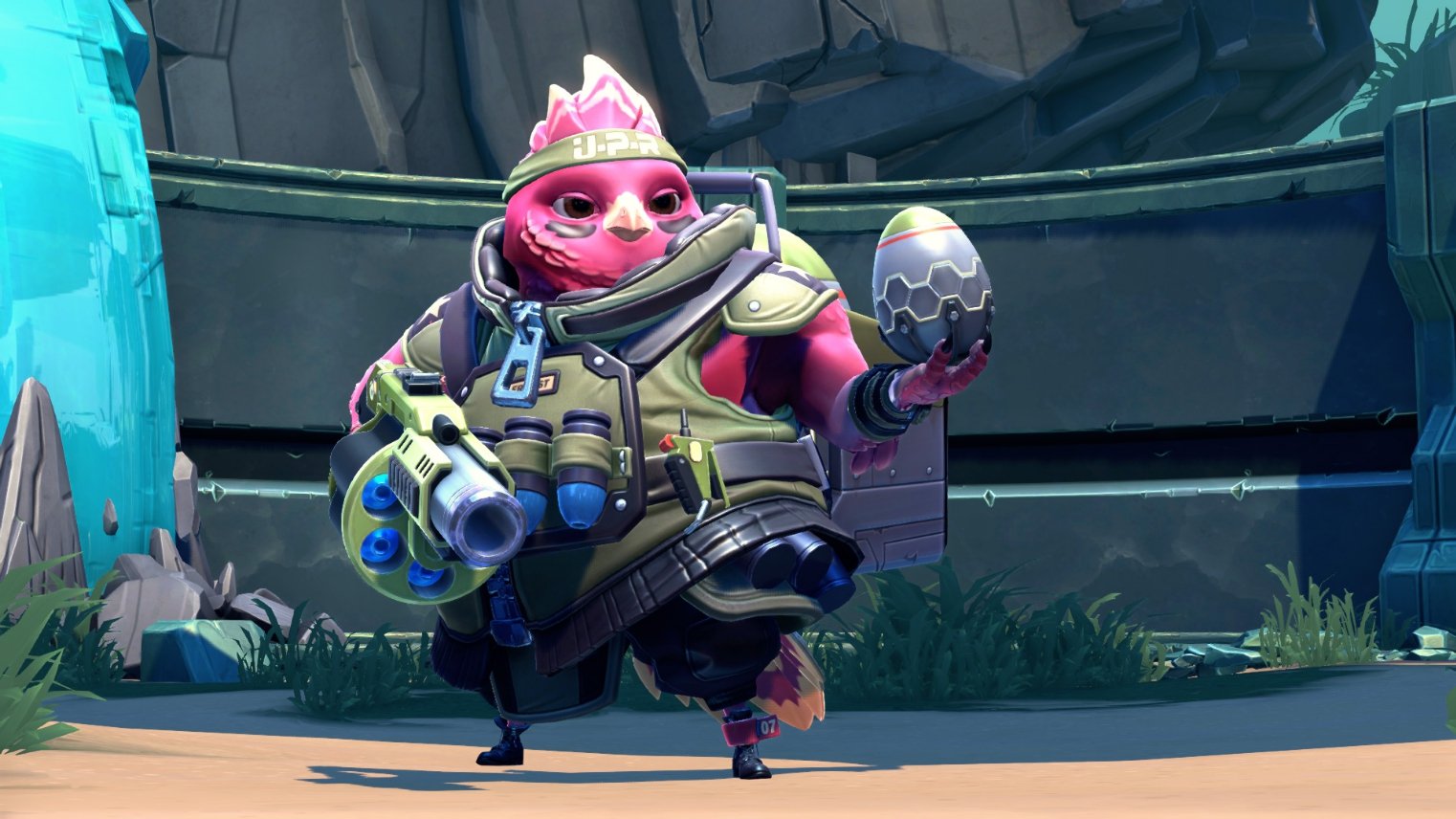 Did somebody say explosions?

Ernest dropped for Battleborn‘s season pass and digital deluxe edition owners a few days ago. He goes live for the general public this Thursday, bringing all sorts of explosives to scare his enemies stupid.

He rounds out the Peacekeeper faction with a gun Battleborn hasn’t had yet. There have been assault rifles, sniper rifles, pistols, submachine guns, and a rocket launcher, but now we have a grenade launcher. Veterans of Team Fortress 2‘s Demoman will feel right at home. 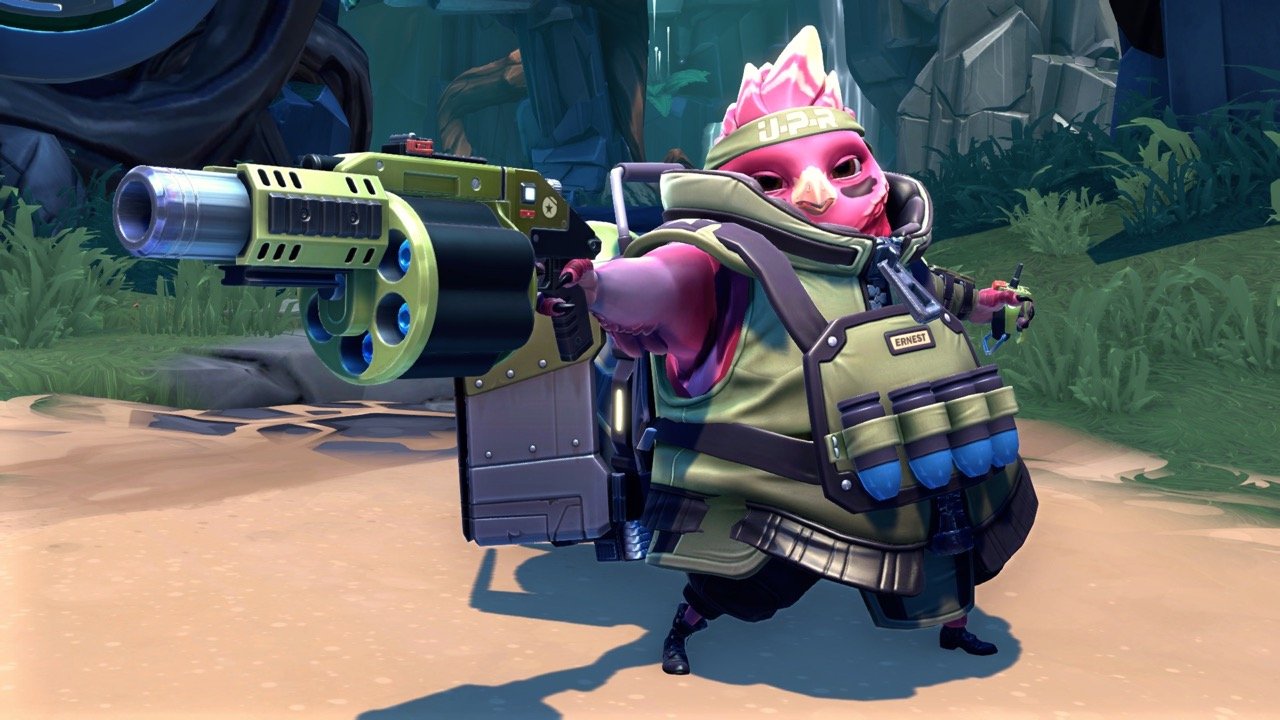 Ernest’s grenade launcher holds six canisters by default (with a Helix upgrade optionally increasing that to eight), but it’s less cumbersome than it could have been since he reloads two at a time. It’s easy to get into a rhythm of firing off six shots then backing off to go through three reload animations before returning.

Grenades will bounce off walls and the ground and either detonate after a few seconds or on contact with an enemy. Skill with the arc of the grenades is rewarded with bonus damage for shots that don’t bounce before hitting. It’s tough to nail fast-moving enemy Battleborn consistently, but it’s a great tool for clearing waves of minions which group up on more predictable pathways.

Ernest was billed as having support abilities, but he’s not a full support character like Miko or Reyna. Rather than any healing or shielding, his Power Egg drops down on the battlefield and provides various buffs to any friendly units in the area. It can be toggled between two modes, one providing greater attack speed and the other granting damage resistance.

It’s geared to benefit ranged attackers more than melee attackers, and it’s easier to use to defend a choke point than it is to push forward into new territory. As Ernest progresses, it can provide additional benefits, like a reload speed buff or a mini bubble shield.

Ernest’s other skill is Explosive Charge, a sticky bomb that can be manually detonated. He can have a few on the field at a time, but each explodes individually (at first). Later upgrades can make these set off chain reactions to nearby charges so it’s more like the Demoman’s sticky bombs, dealing a ton of damage all at once. With the skill cooldown it takes a while to set up, but it’s satisfying to stop an attacker in his tracks taking a big chunk of health off all at once.

Explosive Charge can also be upgraded to allow Ernest to grenade jump. Later on it can be altered to act more like a proximity mine, revealing cloaked characters and detonating after half a second. It adds another hard counter to Pendles, the stealthiest assassin in Battleborn. One of my favorite things to do was to sit in a sniper perch on Outskirts with my Power Egg buffing my attack speed and reload speed while I rained down explosions on the minion waves in the main lane. I had a proximity Explosive Charge set up behind me, so when the enemy Pendles tried to sneak up on me, it would reveal him, explode, then knock him back and me forward, safely out of his reach. 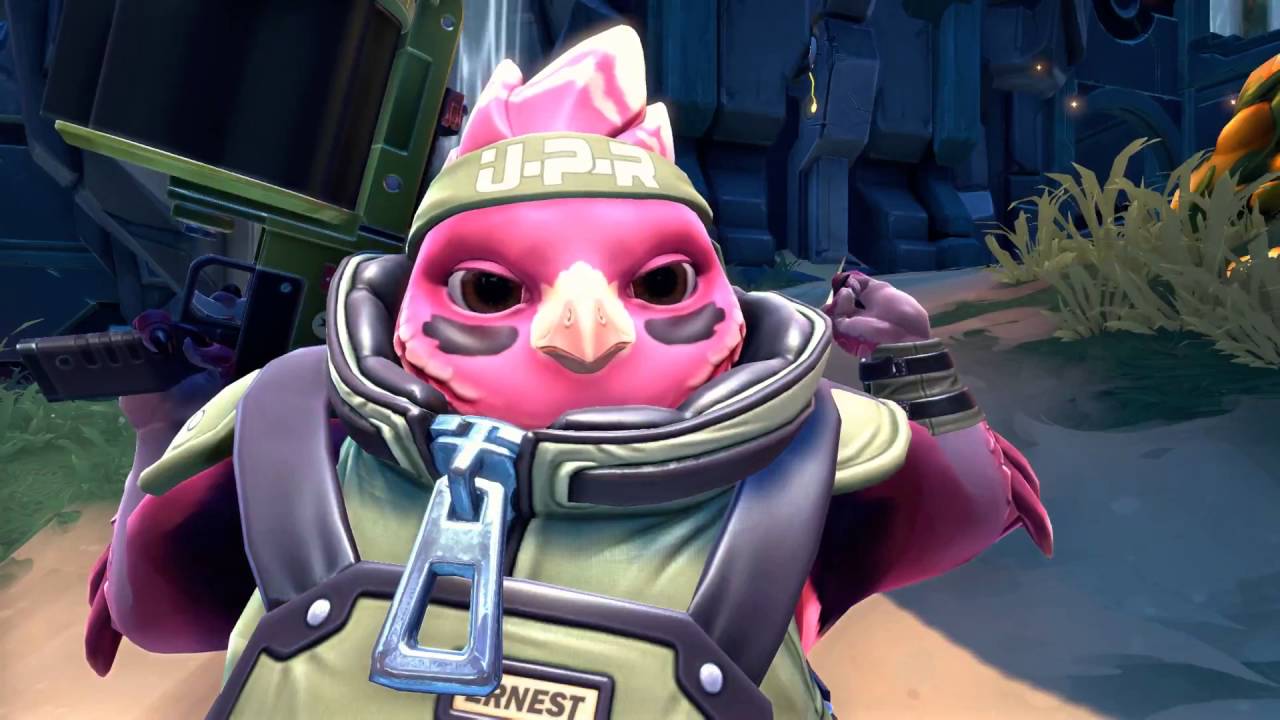 Ernest’s Ultimate ability is Mine Grid, which lays down a blanket of proximity mines over an area. It’s great for controlling pathways or for dealing with melee attackers, forcing them to either lay off while Ernest gets some space or to try to tank the damage as he kites them through it.

When we first saw the concept art for the UPR’s bombirdier, I expected he’d sound a bit like Toby, the other cute Aviant hero. He goes in the complete opposite direction, with a tough drill sergeant persona. It’s another surprise that works in Battleborn‘s favor; he has some good lines and never grates on the nerves.

While Ernest might not be my favorite character to play, I can see him being devastating in the right hands. People who can master the grenade launcher and score direct hits consistently can output some serious damage from a distance. With that along with grenade jumping and mid-air manual detonations, Ernest is a high skill ceiling explosives expert.