Firefly Studio’s Simon Bradbury wants you to know that like all of us, goblins sometimes have to take a leak.

“This is what goblins actually do, this is what goblins are actually like,” he told us before he launched the demo for the upcoming PC and Xbox 360 title, Dungeon Hero. “We wanted to create a world where the enemies wouldn’t just stand around. Why is there a chest of gold there, and why is this goblin waiting for you to kill him? It doesn’t make any sense.”

This is the peculiar premise behind Dungeon Hero — a believable world, where believable goblins and trolls do believable goblin and troll-like things. The game shuns the hack-and-slash genre’s clichéd dungeons populated by groups of enemies who live for nothing more than to get slaughtered at the end of a hero’s blade. In Dungeon Hero, everything has a purpose; it’s a game set in a completely fictional world that attempts to be grounded in reality.

That reality means a hero whose weapon has a real weight to it, and one who doesn’t perform over-the-top God of War or Devil May Cry attacks. This hero has real motivations behind his actions, as do his enemies and the other diverse characters of the world. And, of course, goblins who have to pee.

“They’d at least go the toilet or something,” Bradbury said of the goblins. “We wanted to make a game where they would go to the toilet.” 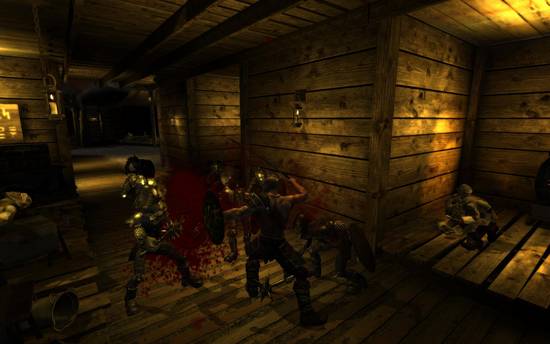 The level we were shown was a trenches level that takes place about a third of the way through the game. Bradbury makes early excuses for the game — which is clearly not in its final stages — saying that the “paint is still drying,” and explains that the final world will have more activity than we are about to see.

But already, the trenches are coming to life. The game’s beefy and manly-man hero has entered an area that looks and feels completely alive. The area we see at first appears to be a goblin hospital, with wounded goblins lying on cots, and others crying out in pain. Goblin doctors stitch up wounded goblin soldiers and goblin citizens. One goblin looks like he’s preparing for surgery as he readies a crude looking drill. Deeper in the trenches, we see more goblins engaging in other, more leisurely activities; one is sitting relaxing on a bench and playing a guitar.

In the demo, the hero didn’t start hacking and slashing these particular goblins. As it turns out, these are “good guys,” and they’re simply going about their daily goblin business. It’s the nasty “Red Eye” who the hero is here to (reluctantly) eliminate, and it’s not long before the first encounter is reached. This is where we first saw what Firefly is calling a “brutal, more realistic form of combat.”

The combat in Dungeon Hero looks heavy and is supposed to feel rhythmic, in stark contrast to other action games on the market which really on wild combos and exaggerated actions. The hero is a huge, hulking chap carrying a enormous sword, and he’ll use this to his advantage. He hacked and slashed enemies, knocking them backwards or on to the ground. At one point, the force of a blow caused one goblin to lose both his sword and shield; this resulted in fear (and he presumably peed himself), and he ran away, trying to find cover. 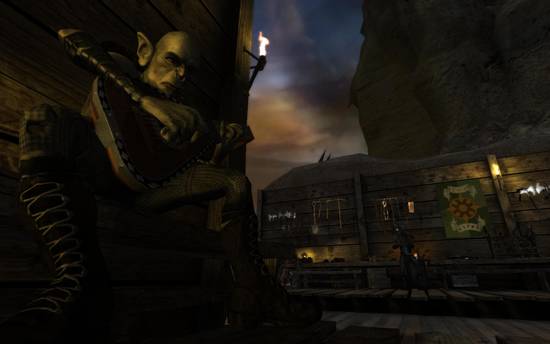 The game will not, however, contain over-the-top violence and dismemberment. The combat should feel brutal and violent, but the joy that many gamers find in hacking off limbs is off of the table.

Also demonstrated was the game’s “close combat” system, which can be used in close quarters fighting with multiple enemies. By pressing and hold L, the hero can enter a different type of stance and is able to perform offensive moves that knock back his attackers. Once pushed away to a safe distance, you’re then able to pick enemies off with a number of melee moves. In the demo, we only saw what looked like a handful of moves (mostly different types of slashes), but we were told that there are over 300 different types of upgradeable moves. The skill chart we were shown looked like a map of the human nervous system; it was ridiculous enormous, with dozens of paths breaking off from dozens of paths.

Weapons in Dungeon Hero also have a purpose and weight that is relative to the world. A spiked metal mace, for instance, will have a noticeably different effect than a sword. That said, the hero is said to have the best weapon in the game, so don’t expect to be finding hot new loot to equip yourself with. The logic here is that goblins are poor and have “shit weapons,” so why would you want to pick up what they drop? The idea is instead to be constantly advancing the hero and his skill tree, by upgrading and learning new attacks as you progress. 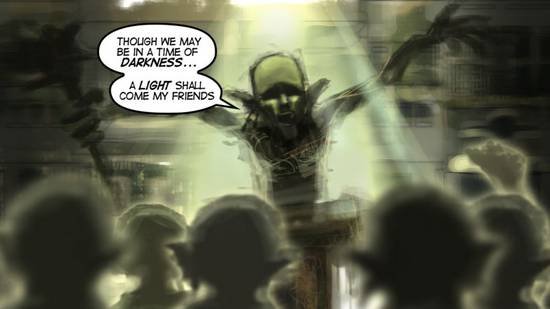 While we didn’t get a chance to see it in action (the early build of the game kept crashing on the Windows Vista machine it was running on), Dungeon Hero will also contain elements of platforming. But the game is most certainly an action game, and you won’t be performing Tomb Raider-style jumps. In fact, the platforming is more akin to something like you’d see in a 3D Legend of Zelda title — simply pressing in the direction of a platform will make the hero jump. There are no pixel perfect time jumps here; the hero can take care of himself, and the idea is to make the player feel empowered.