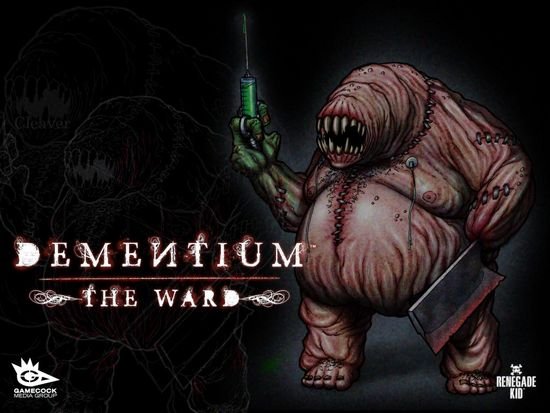 Only a few of the games at EIEIO were playable, and luckily for me, Dementium: The Ward was one of them. I was looking forward to this game for awhile now every since Nick broke the news about it.

So how is an M-Rated FPS game on the DS? Can I use any more acronyms in this post? Hit the jump to find out.

Jools and Gregg from Renegade Kid were showing off the first level from Dementium: The Ward. After giving me a quick run down on the story, I was handed a DS and oddly at first, headphones. I’ve never used headphones before on a handheld game so I was wondering why they handed them to me; especially with the other DS in the room hooked up to a speaker set up. I quickly put two and two together and realized that Renegade Kid put in a ton of work on the audio quality and unless you use a headphone or speakers while playing this game, you’re going to lose out on a great aspect of the game.

The demo starts off at the very beginning where the main character wakes up in an empty hospital room suffering from a coma. The controls are very simple and quick to learn. The L button is used to fire/use whatever weapon or item you have in your hand. The D-Pad is used to move and the touch screen is used to look around. To open a door, read something, and any other type of similar action, you just press the appropriate button when it pops up on the touch screen. You will also have a note pad in which you can write down clues into such as when you find a wall with a series of numbers written in blood, which is used to open a locked door. The configuration of the button layout can be changed, but only 6 buttons are ever used on the DS (the 6th “button” being the touch screen itself.) 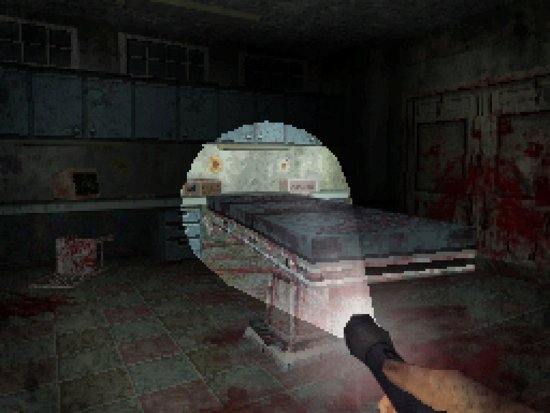 The game itself has a very The Suffering feel to it with a throw back to Resident Evil 1 puzzles in the mix. The first section has you going through hospital hallways, a short outside level where it was raining, and then back into the hospital. The game has a very amazing lighting engine, which has a very big factor in the game. One of the first items you will find is a flashlight that has real world proprieties. This part of the game really impressed me. Especially since I thought the DS could never do so much like what Ward is doing for it. Through out the level, you’ll find 3 weapons in the game, the nightstick, handgun and shotgun. They come quite in handy when you start coming across the enemies in the game. 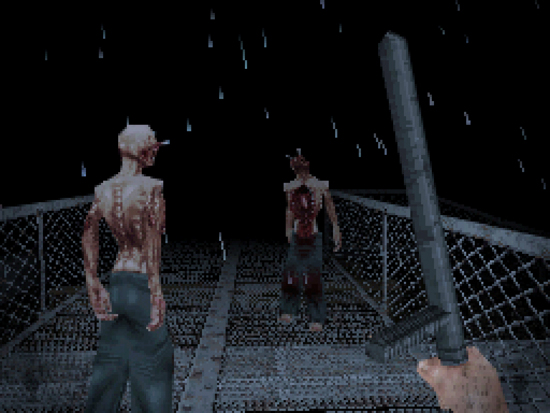 The first baddie is a zombie thingy with a giant vagina looking mouth on in its chest. They’re slow like a zombie but in groups of two or more, can take you out very quick. The second creatures you’ll come across are little worm like leeches. These won’t hurt you much, but can become very annoying especially on the DS control style.

After about ten to fifteen minutes of playtime, you’ll come across the very first boss from the first picture at the top of this post. There’s a cut scene shortly before this boss fight showing it dragging a nurse into the room you eventually fight it in. When you do go into the room, a cut scene takes place showing the fat demon using his butcher knife hand chopping up pieces of meat. My dream of a super disturbing and violent game for the DS has finally arrived. You can’t exactly tell that this was the nurse, but come on, it’s totally alluding to it.

The boss fight though really started to piss me off. I fought the boss a good thirty times before finally giving up. The boss has 3 basic attacks. The first thing it will do is shoot a stream of chemicals from the giant needle it holds. The second attack is when the boss breaks open a panel allowing the worm leech creatures to come into the mix. The final attack, which is what really infuriated me, was when it would swing it’s giant knife and leaving you defenseless for a good 10 seconds. Gregg later told me that this is to represent that the force from the blade is so strong, you just can’t get up right after the hit. But when the damn thing will swing at you 1 or 2 more times after the initial attack and barely get hurt from a shotgun blast in the face, a guy just has a urge to throw a DS across the room.

The game will run about 7 hours in length and have some open ended levels. It’s expected to arrive November this year for the Nintendo DS.