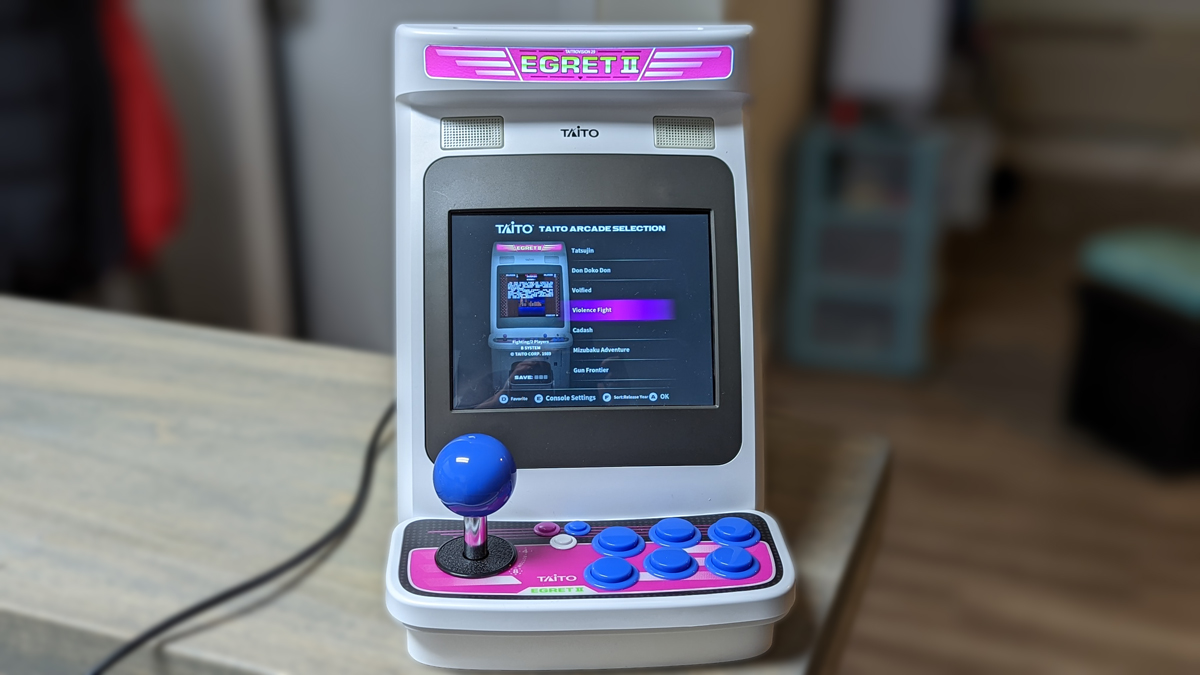 One of the most lucrative businesses to be in these days is anything that has to do with exploiting the nostalgia of millennials. Sure, it’s been a rough few decades for those sandwiched between Generation X and the Zoomers. Studies show we’re way behind where our parents were financially at our age, with two massive recessions and ridiculous student loans hobbling this generation. Despite that, as we’ve consistently seen, our childhood is up for sale with all corners of entertainment seeking to capitalize on the fondness we have for the movies, tv shows, and games of our youth. We may not have much money, but we somehow have the cash to buy expensive tchotchkes and doo-dads that let us relive our school days.

Case in point: the mini arcade industry. If you’re like me, you probably dreamed of having an arcade cabinet of your own during your childhood. Now, that dream is being made a reality, just on a smaller scale than what you might remember. Arcade 1Up is easily the biggest name in this sphere, with its 3/4 scale collection of arcade greats catering to those with basements that need filling. Other companies are going even smaller. SNK dropped its Neo Geo Mini a few years ago and Limited Run Games teamed up with Sega for the Astro City Mini last year. Now, Taito is getting in on the action with its Egret II Mini cabinet. 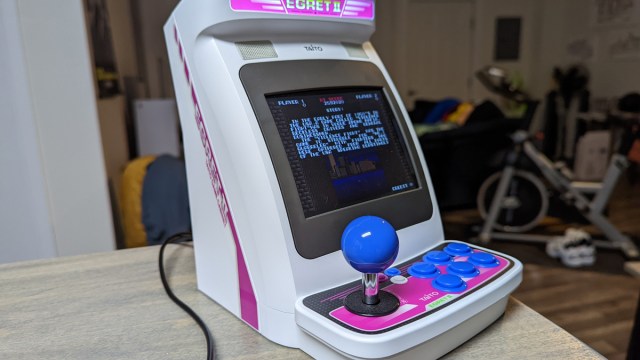 Standing just over 8” tall, the Taito Egret II Mini is a personal-sized recreation of the Taito Egret II arcade unit that you can still find around Japanese arcades today. Attached to the base of the unit is the controller, which is just shy of six inches long but big enough for somebody like me who has fatter hands. Just make sure you’re using fingertips and not your full fist lest you want to keep knuckling your unit.

The controller has six gameplay buttons, a very responsive 8-way directional control stick—that you can switch with a knob to a 4-way directional stick—and three buttons you’ll use to start a game, exit a game, or add more digital tokens to your game. It’s a great device that feels good to play and one that seems to hold up with extended gaming sessions. I’ve been using my Egret II Mini with regularity over the past two weeks and nothing about the controls feels loose or sloppy. Then again, there really aren’t too many games in this collection that would push me to go hard with the controls.

The star of the device is its screen. The Egret II Mini boasts a colorful 5” screen that you can turn from 4:3 to vertical TATE mode—or from landscape to portrait if that’s more familiar wording to you—with a very loud and satisfying “click” once the screen is snapped into place. All you do is push in on the screen to unlock it, rotate it, and push it back in to lock it into place. As this device boasts a nice selection of vertical shooters, I can’t express my appreciation enough that this little innovation made it into the final product. It just makes playing those games all the more authentic to what I remember from the arcade trips of my childhood. Just don’t expect the picture to always fill the screen. 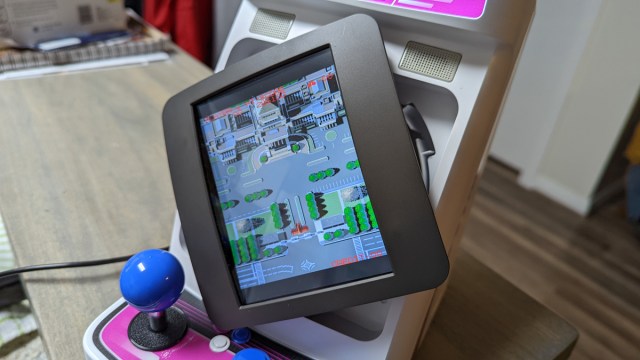 Speaking of games, what exactly do you get with the Taito Egret II Mini? A lot, actually. The main device itself comes with 40 Taito titles that span more than 15 years of the company’s history. Some of the more notable games in the mix are Space Invaders, New Zealand Story, Bubble Bobble, Elevator Action, Tatsujin, and The Legend of Kage. If you’re into arcade shooters, they make up roughly 1/4 of the entire package.

Beyond that, there are some very interesting inclusions that I didn’t really expect, such as a licensed game (Lupin III) and a trio of fighters, one of which (Dan Ku Ga) is just an updated version of another included title (Kaiser Knuckle). While I don’t see myself getting seriously into Kaiser and Dan Ku—the less said about Violence Fight, the better—they are a great reminder of the biggest arcade gold rush of the ‘90s when nearly every developer was flooding the market with one vs. one fighters following Street Fighter II’s meteoric rise.

Easily one of my favorite features of the Egret II Mini, you can save your game with any of the included titles. That way you don’t lose your place if you have to stop playing, something that proved beneficial for me a few times after I kept getting interrupted by work calls.

While I expected to enjoy several of the more recognizable names, it’s actually a few of those lesser-known titles that I’ve found myself returning to every time I boot up the machine. Cadash is a thoroughly enjoyable side-scrolling RPG with multiple playable characters to learn and master. Growl is an absurd beat’em up featuring a crew of wildlife preservationists beating the snot out of poachers, ethnic stereotypes, and, for some reason, businesswomen in pencil skirts. The most fun I’ve had with the package so far is Ninja Kids, another ridiculous beat’em up starring a quartet of puppet-looking ninjas chopping dudes in half as they fight against a Satanic cult. It’s good, silly fun that reminds me greatly of those childhood days spent at the local Alfy’s playing Ninja Baseball Bat Men.

If you want to bump up the game count, there is a way to expand your collection. The back of the Egret Mini II unit has two USB slots for controller accessories (sold separately), as well as an HDMI port and headphone jack. There is also an SD card slot on the side of the machine. One of the available optional controllers for the Egret II Mini is a trackball and paddle unit. Packaged with this accessory is an SD card featuring 10 games designed around those styles of inputs, including three different versions of Arkanoid, dragon’em up Syvalion, and the wonderful marble game Cameltry.

It will be interesting to see if there are more SD cards on the horizon, but as it stands right now, these 40 games represent a dynamic and diverse slice of Taito’s reign during the arcade era. There are some great entities from the company’s heyday that didn’t make the cut, such as Chase H.Q. and Gun Buster, but titles like that would require even further controller expansions if players wanted to experience them as authentically as possible. For what’s here though, it’s a great tour of an era that many like me may have missed the first time around. 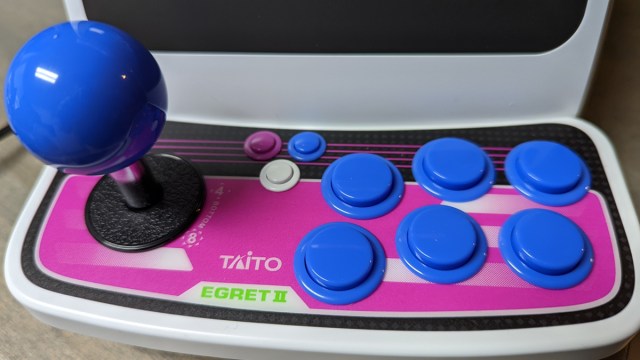 That said, like with many of these mini arcade units, it’s a difficult product to recommend to anybody who isn’t already 100% nostalgic for Taito’s golden age. Despite the attempts the company made in the ‘90s and 2000s, Taito just doesn’t have the brand relevancy it once did. It’s still out there making games as part of Square Enix and doing its part to keep the dwindling arcade scene alive, but I can’t imagine there is a great swath of players who swoon when they hear the Taito jingle the same way millions lose their minds when they hear the iconic Sega start-up sound.

If you are nostalgic or just have the money and plenty of counter or bar space, this is a well-put-together arcade unit. Its controls are responsive, the ability to turn the screen into TATE mode for those vertical scrolling shooters is genius, and the HDMI port lets you share the fun with others. I’ve always had a special place in my heart for games like New Zealand Story and Puzzle Bobble, so I know this will get plenty of play around my apartment once I find the proper spot for it. Whether or not the same is true for you will depend on just how many fond memories you have of plugging quarters into those old-school arcade cabinets.

The Taito Egret II Mini is now available for preorder from Strictly Limited and Games Rocket.

[This review is based on a promotional sample of the device provided by United Games Entertainment. In addition to the hardware unit, the reviewer also received the trackball and paddle controller accessory.]