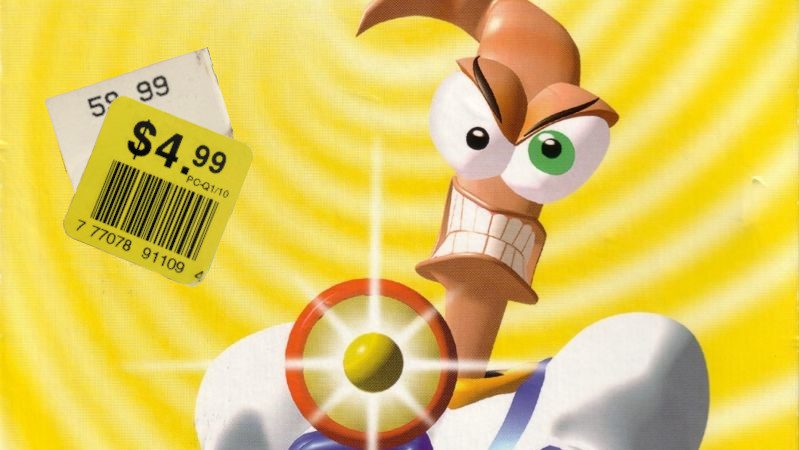 I don’t know about you, but my memory for video games is vivid and all-consuming, like a thirsty sponge full of radioactive ooze. It goes back as far as I can remember anything, and certain events in my life are linked to what I was playing at the time. Take Earthworm Jim as an example. I vividly remember renting it from Blockbuster with my family and staying up a smidge late to watch my dad play a bit of the first level.

I also recall getting immensely excited the first time I saw a commercial for the cartoon. Once, I wrote a fan letter to Shiny asking if they were making a sequel, and they wrote back!

So, there was no dissuading me from Earthworm Jim 3D, and through the lens of a daft pre-adolescent, I had a good time. I must have been determined because otherwise, I have no idea what I saw in the game. Earthworm Jim 3D is as bland as eating a bag of flour. It contains none of the imagination of either the first two titles or the cartoon that it leans closer to. 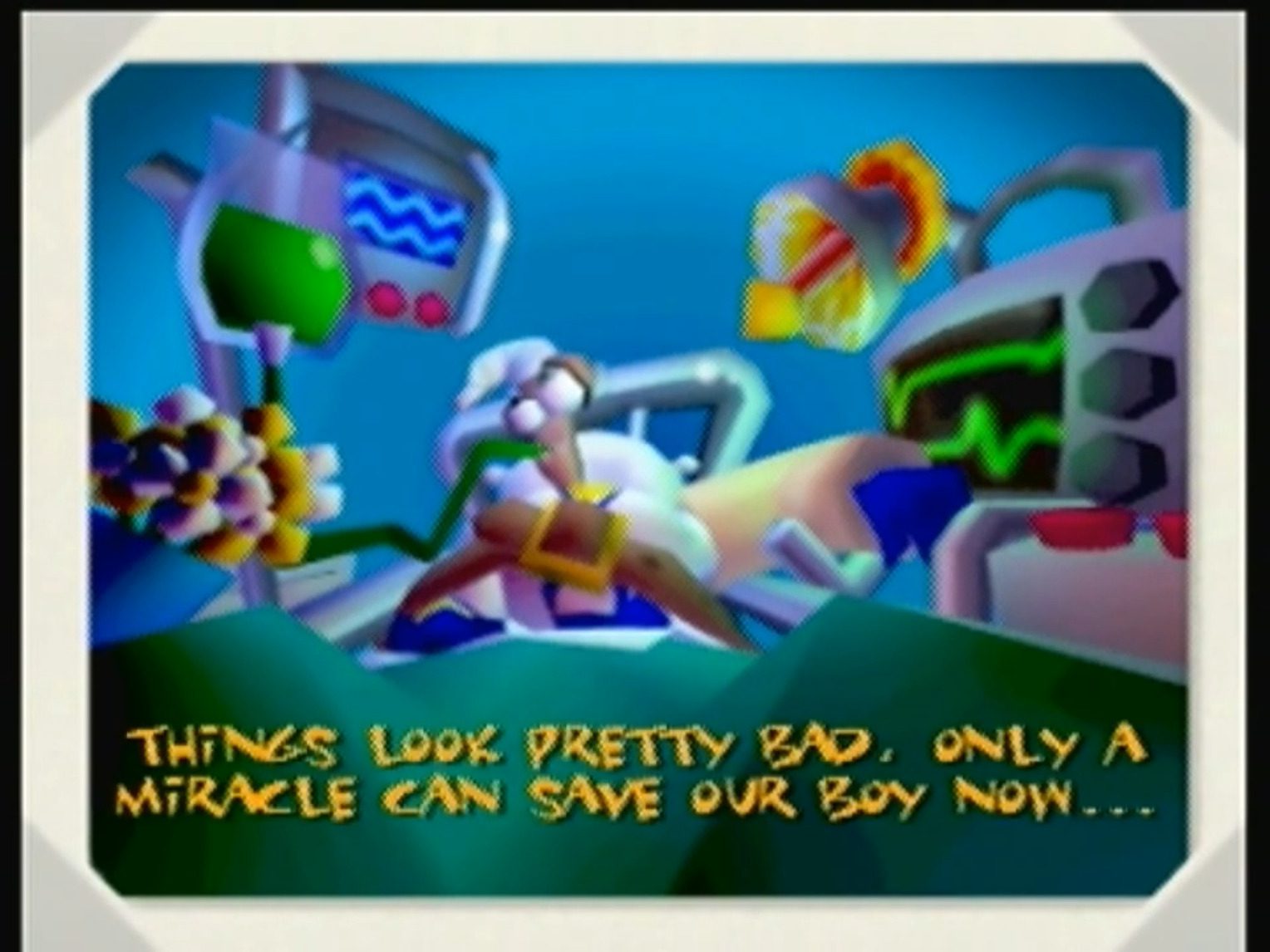 One of the things I recall about Earthworm Jim 3D was its protracted development. The time I spent waiting for the thing to be released felt like an eternity. I used to browse the pre-dotcom bubble internet for tidbits and screenshots as I awaited with anticipation. By the time the game was released in 1999, the show it was based on was off the air for three years, and most of the content that was shown of the game had been cut.

Worse yet, the box it came in and the advertisements that were launched alongside it didn’t depict the final product. The North American box blurb merely committed the sin of having a screenshot with the beta HUD, but PAL regions got ones that showed areas that didn’t even appear in the final product. Ads proudly announced the inclusion of Evil the Cat, another baddie who found their way to the chopping block. So, really, the problems with Earthworm Jim 3D start before you even open the box. 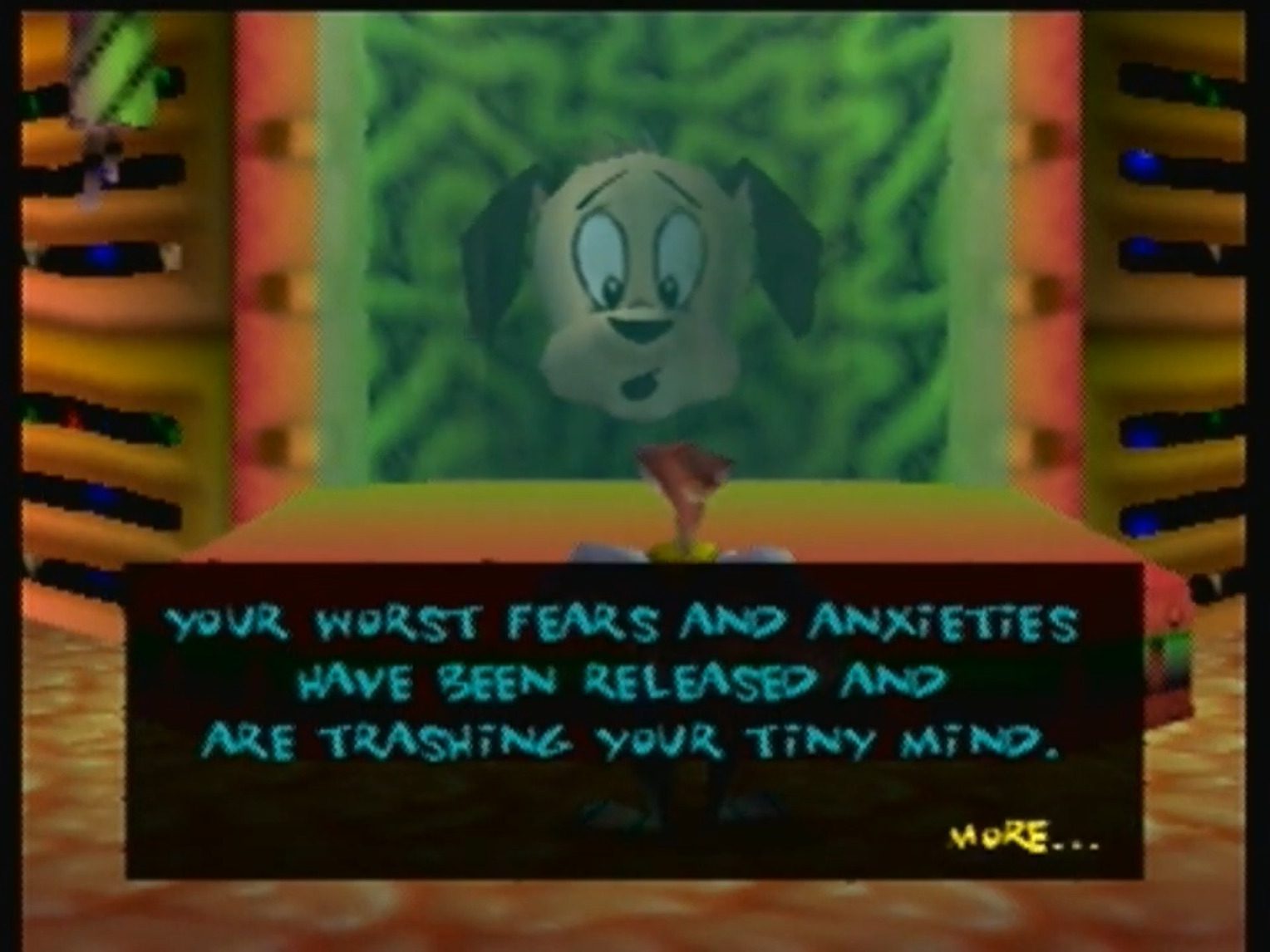 Quite a few popular characters failed in their first dalliances with 3D. Bubsy, for example. No, wait, I don’t think he was ever popular. Regardless, 3D was a battlefield that many licenses struggled to adapt to. Earthworm Jim may be one of the most prominent fatalities of that.

Part of the issue is that Shiny didn’t want to make sequels anymore, which didn’t seem to work out for them in retrospect. Interplay handed Jim over to VIS, a relatively unproven developer, and that went about as well as expected.

From the kick-off, the game features problems typical of the early 3D era: the camera sucks, the frame rate is horrible, the controls are… workable, I guess. The animation is ridiculously choppy, which either demonstrates that the game was unfinished or VIS just didn’t realize how little space was available on an N64 cartridge.

No, in terms of gameplay, Earthworm Jim 3D isn’t the deepest crater in the early 3D landscape. It’s playable. Mostly. 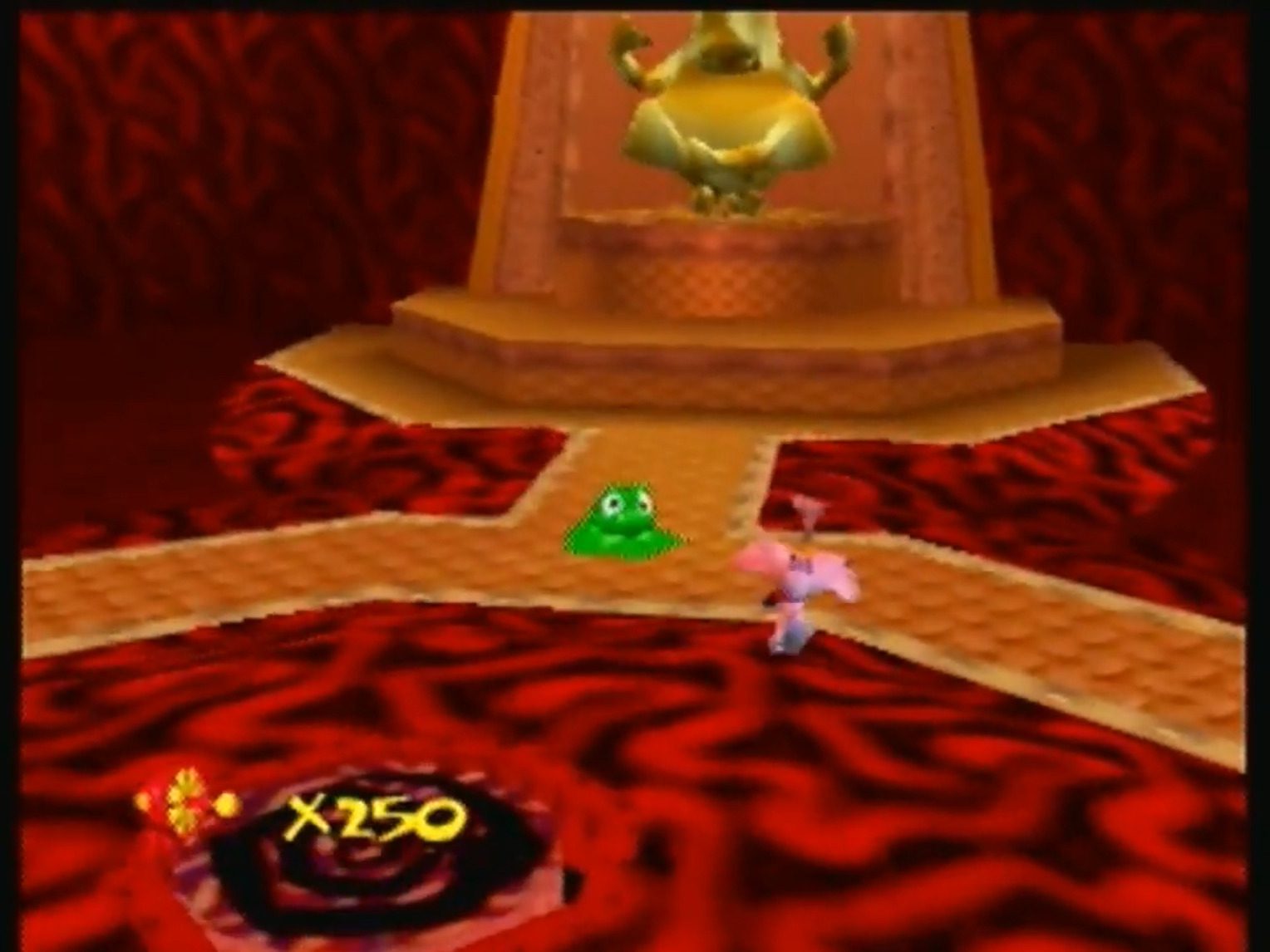 What more prominently kills Earthworm Jim 3D is how aggressively unimaginative it is. Earthworm Jim is the story of an unassuming worm who finds its way into a super-suit and immediately sets off to save a princess. It crosses the galaxy but pays no attention to continuity. One moment, you’re traversing a hellscape while screams and elevator music play in the background, the next you’re navigating a harrowing underwater maze in a fragile glass submarine.

Earthworm Jim 2 jumps further into the deep end, to the point where I’d just like to call it art. Swimming through someone’s intestines as a blind salamander, jumping across heaps of paperwork, bouncing puppies off a giant marshmallow; there’s nothing normal about the Earthworm Jim series. It was bewilderingly bizarre, constantly flipping the script and forcing you through more and more unhinged challenges.

We get to Earthworm Jim 3D, and, at best, I’d call it weird. It’s not bewilderingly bizarre, it’s just maybe quirky. And this takes place in Jim’s head, where anything should be able to happen. 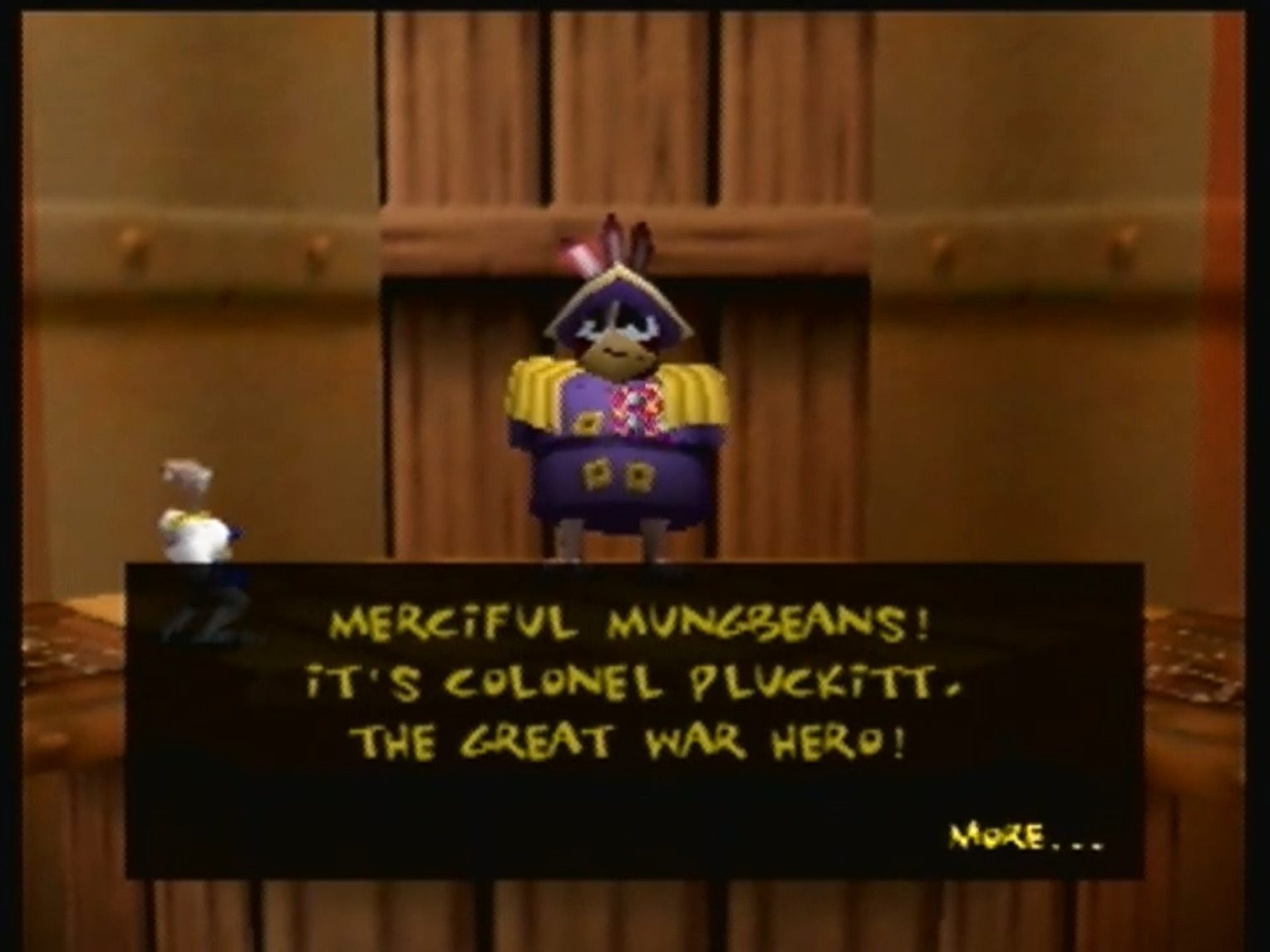 Playing off the joke about Jim having four brains, the game world is separated into four sections: memory, happiness, fear, and fantasy. It lays the groundwork for some neat character exploration, but Earthworm Jim 3D doesn’t want to do that. His memory is of some sort of war between cows and chickens, his happiness is food (same, guy), his fear is mundane horror, and his fantasy is to be in a western. You have to work to come up with ideas so bland.

The farmyard war is probably the most imaginative, but I can’t say it makes much sense. You help the chickens. Chickens eat worms. If this happened while Jim was a mere worm, then how did this memory actually play out?

The food levels are maybe the most interesting, but then it pulls in fart jokes. Yeah, you eat a can of beans and that rockets you upwards. It’s horrible, since you can’t tilt the camera to any helpful extent, and it expects you to land on ledges above you.

Horror is the worst. The most creative Earthworm Jim 3D gets is zombified disco dancers (because disco is dead, get it?) Just recalling this game’s attempts at humour is causing my soul to die. The weirdest moment was when Elvis gets ground into a hamburger. That’s kind of dark, but I can dig it, so let’s stop there. 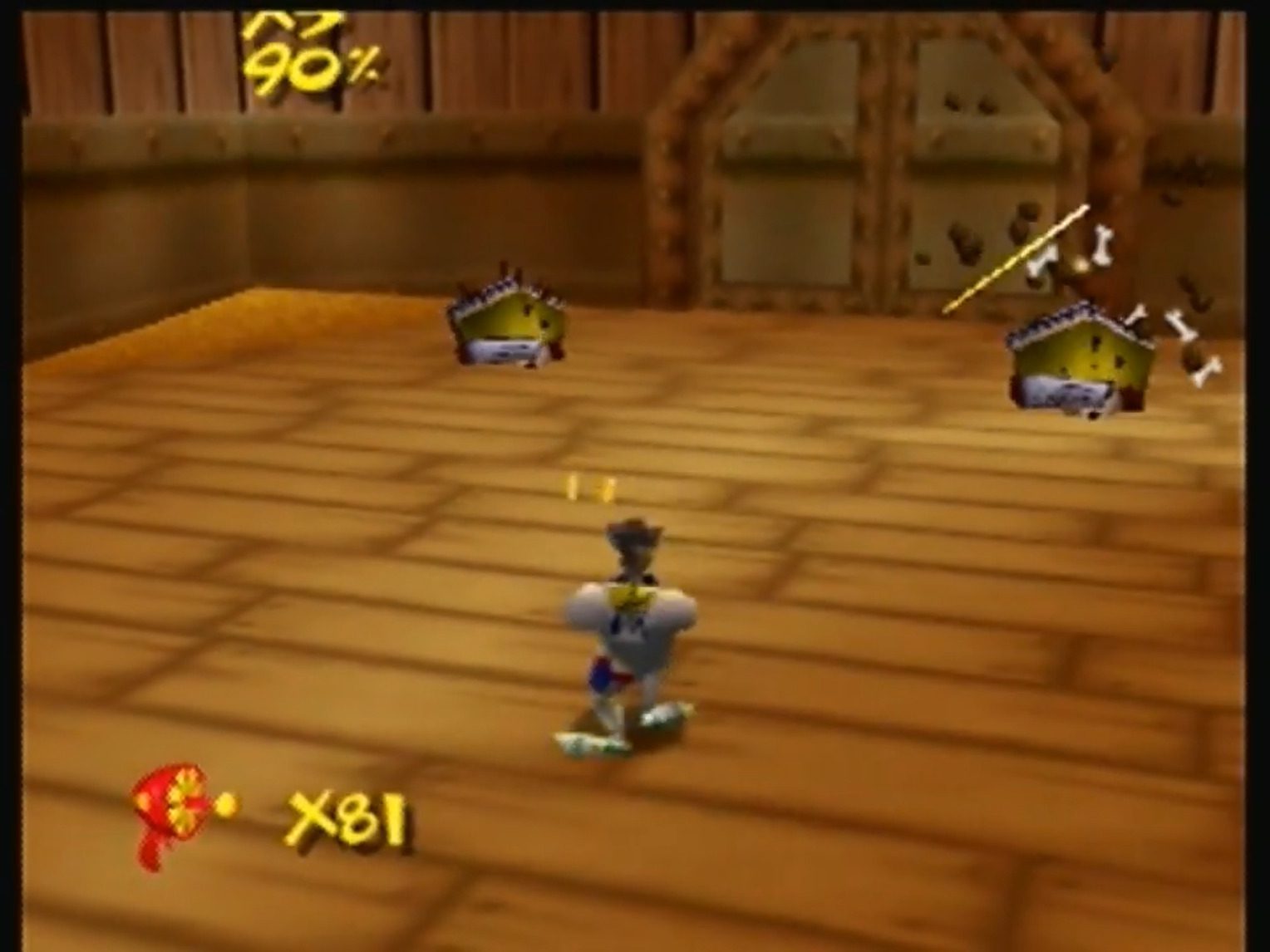 In terms of gameplay, the most horrendous part of it is the boss battles. Far from tests of your skill, you’re put on the belly of a pig and have to surf around an arena, gathering marbles. There are a hundred and you and the boss compete to collect them. All of them. Meaning if the boss collects any you need to hit them with a bullet and to free those little marbles, then scoop them up before the boss can touch any of them.

This isn’t too bad, but the later bosses start dodging your bullets with extreme precision. There’s a strategy to landing a hit, but it’s such excruciating agony. There are five of these encounters, and they don’t get any more inventive or any better.

If you manage to collect all the marbles in the game, you get the ability to play as Earthworm Kim; Jim’s feminine side. It’s like the game’s hard mode because you take double damage. Get it? Because femininity is equivalent to weakness!

Don’t try feeding me that shit; Jim is a hermaphrodite! Is he sincerely that against showing his feminine side that he represses it? That he considers it his weaker side? Is he that insecure? Is this what they mean by “toxic masculinity?” 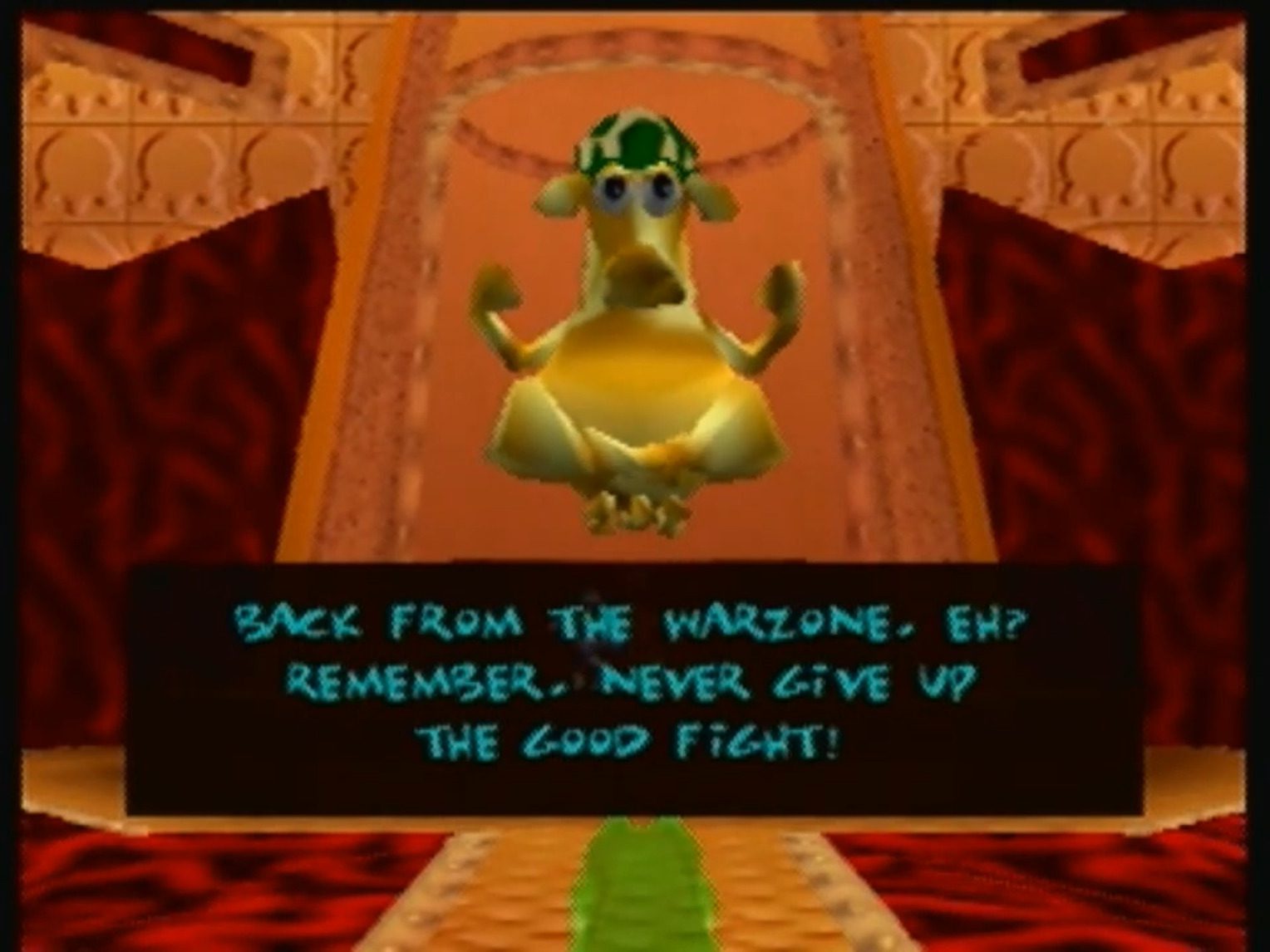 It could have been worse, I guess. I personally believe that Earthworm Jim’s transition into 3D should have gone the way of Rayman 2, but instead, we got “at least it’s not Bubsy 3D.” Frankly, the Game Boy’s Earthworm Jim: Menace 2 the Galaxy is probably the worse game, but most people were able to shut that one out of their consciousness. Earthworm Jim 3D was the higher-profile flop. Plans for a PlayStation release were humiliated out of existence.

This game essentially ended the EWJ franchise. We got an HD version of the original game years later, but never a true sequel. There were a few cancelled attempts, but nothing came to the surface. Currently, Earthworm Jim 4 is in development exclusively for the… Intellivision Amico. It’s slated for release October 10, 2021, but I’ll believe it when I see it. Which I may never, since I don’t see myself buying an Amico. Sorry, Tommy Tallarico, I hope we can still be friends one day.