I’ve been on a survival kick lately. I think it had something to do with hanging out in forests and beaches during the entirety of my holiday and coming back to marathon episodes of Survivorman with Les Stroud.

Whatever the case, my complaints about survival games such as Ark and Minecraft have always been the same; you don’t do much actual surviving. That is early game, the basic stuff. Once you figure out how to properly forage, your risk of ever dying from the elements is dramatically reduced, and it ends up boiling down to teaming up with other players, building your own space together, and ultimately going to war with the rest of the environment around you and opposing teams who want to take all of your shit.

Citadel: Forged with Fire takes this element and runs with it. It starts out identically to games such as Conan Exiles; you are for all intents and purposes naked in the wilderness. You start picking up sticks, rocks, and plants, and after gaining a few levels, have the ability to craft potions, weapons and armor so you can start hunting game. At no point will you be feasting on mushrooms or trying to find water to survive the day. Instead you will be worrying about health and mana potions due to the danger of combat and the presence of high magic which can be utilized almost immediately.

Trimming the early fat is an effective way to thrust people into the wider experience of Citadel. Once you get that farm set up in Minecraft, you are set for the rest of the game, comfortably able to harvest food unless you decide to take a long trip. And even then you can stuff your inventory space with sustenance and survive almost indefinitely until you hunker down at your next destination. Conan Exiles is perhaps a little less forgiving, but once I found a group to tag along with and we built a base and some beds, the only threat of death became our own carelessness and other players.

So what’s the point of having a survival element if the only thing it’s good for is acting as an early barrier to new players? At least in something like Don’t Starve, the entire game is focused around this and you never feel too comfortable in your own skin. Citadel stripping the window dressing of “survival” and getting right to what matters is a refreshing take on a genre that has become all too saturated with similar experiences.

Once you get your bearings, get some armor on your back and survive through a few fights, you’ll want to claim some territory. You do this by erecting buildings by placing pre-constructed pieces like Lego on the landscape, and claiming your creation with a throne, a task that offers quite a bit of customization. Soon you will have a base populated with health fountains, crafting benches, and all the typical affair needed to continue building on your character.

And eventually you will be fighting orcs, giants, and other players in snappy combat that feels a little clunky at times, but is ultimately pretty enjoyable. It’s a bit of a grind and has a long way to go in finding a solid game play balance, but the skeleton is there, and it feels like a somewhat more focused interpretation of the ever growing genre. 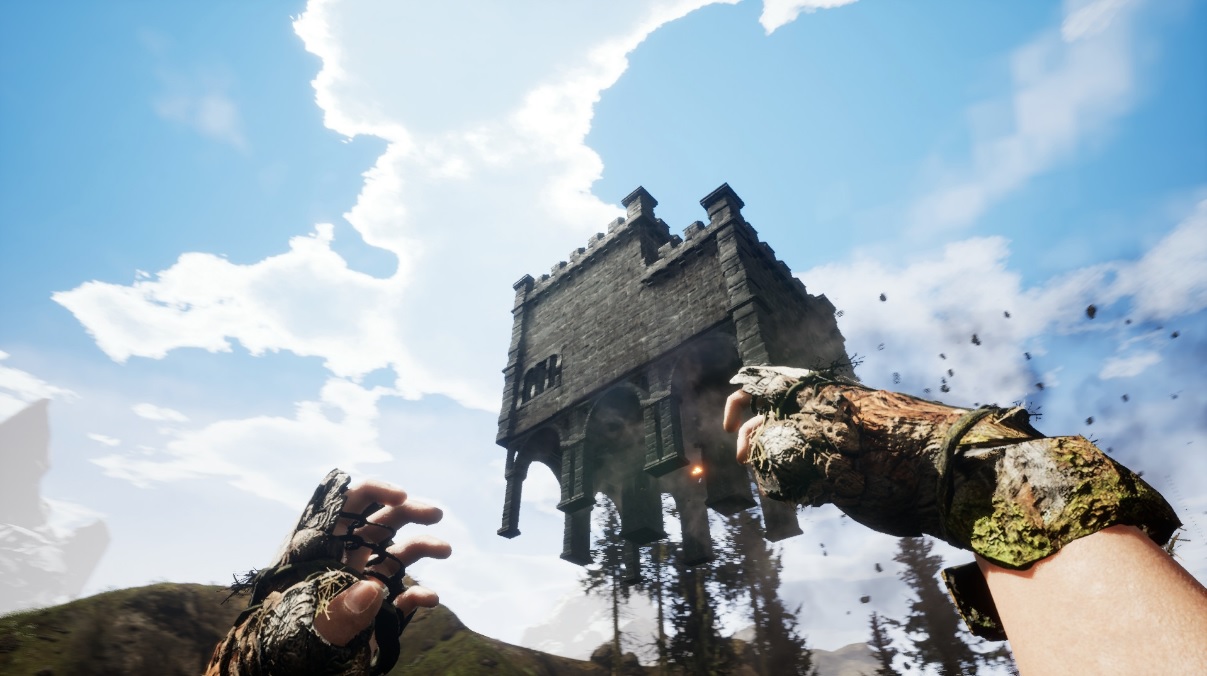 Citadel is early access, and not a very polished experience at this point. Character animations are laughably stiff and jittery, A.I. can be absolutely abysmal at times, and performance is shaky. PvP is chaotic and unforgiving, with quick death doled out to the slow witted. Graphically the game is quite nice; my system is absolutely no workhorse and

I found the game playable, but if you want to really crank up the settings, you are going to need a big rig to do so. And even then, in its current state, I have heard numerous reports online and from friends that even on super high end systems the game has some annoying performance ticks. Something to keep in mind perhaps, but hopefully nothing to worry about; the game is early access after all. And as we all know, no game in the history of early access games has ever retained the problems it had in that state after being officially released.

For twenty bucks it’s worth a look if you are patient and don’t mind being a perpetual beta tester until all the kinks are worked out. If Blue Isle Studios stick to their guns, there could potentially be a pretty great game in the making here.

[This preview is based on an early access build of the game provided by the publisher.]