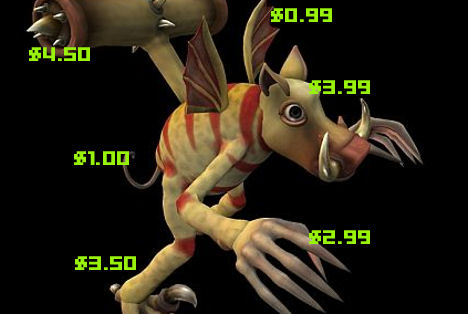 Asking Electronic Arts if they’d like to charge for extra gameplay additions is perhaps a bit like asking a member of The Rolling Stones whether they’d like to f*ck a barely legal crackhead. Regardless, EA has answered that question in the affirmative as CEO John Riccitiello has confirmed that he’d simply love to sell us extra parts for Spore. Did anybody expect he’d be sad about such an idea?

“I would love to imagine that two years from now or a year from now the debate is whether or not we need a ‘Spore‘ label inside of EA,” stated the EA Warlord. He added that he’d enjoy the ability to “monetize, if you will, body parts, plant parts, car parts and planets as a way to generate incremental revenue on an installed base of several million active users.”

“But it’s a little bit like pool. I’m afraid if we spend too much time setting up the second shot, we’ll miss the first shot. Right now, it’s all hands on deck to make September 7 the event that matters.”

Kind of brings new meaning to phrase “paying an arm and a leg,” no?