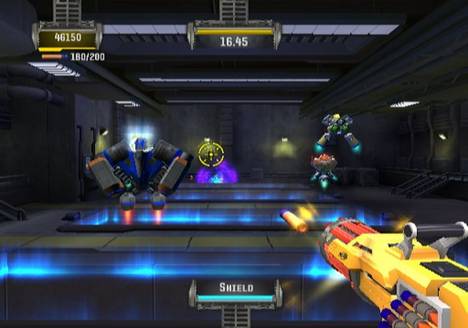 NERF N-Strike is easily going to have the best peripheral ever made for a game. You will actually get a real working NERF gun that also doubles as the gun cradle for the Wiimote. There will be a removable one-shot NERF launcher where the Wiimote fits, and the NERF gun is even designed to accept the MotionPlus and allows for the Nunchuk to plug in for easy access.

There will be a story for the single-player mode, designed in a Saturday morning cartoon fashion, where the main character joins an elite NERF group and fights with NERF guns against robots. This is a kids’ game after all, so there won’t be any humans that are yelling out horrible one-liners to shoot at.

The game will support up to four players with around 24 events to play. I played a game with Emily from Ripten where we had to shoot as many balls as we could. Each time we hit a ball, a machine hanging above the stage would paint the ball your team’s colors until all the balls were destroyed.

Players will have access to 25 guns, 12 of which are real NERF guns and 13 of which are brand new NERF guns designed for N-Strike. I played with a handgun, an automatic rifle and a sniper rifle during my playtime.

The game basically feels like Time Crisis, but with NERF guns. The main downside to all of this is that the gun and game package will cost $59.99, and the gun by itself will go for $14.99. That’s a great price point for the gun, but no arcade-style on-rails shooter is worth more than $45. Both the gun and game will be out in your local videogame section and toy section this November 4 for the Wii.