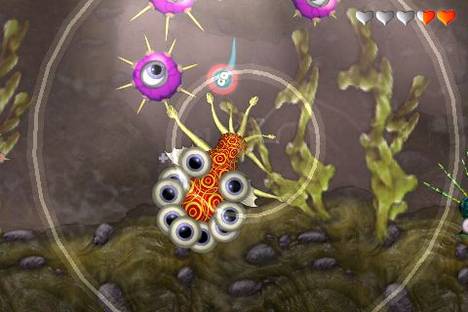 In a rarely explored area of the EA Showcase sat four iPhones. Each held one of EA’s upcoming iPhone offerings, and I’m here to tell you all about them. Well, actually, I’m just going to talk about Spore. If you honestly need me to tell you about Scrabble, Sudoku, and Tetris, then just GTFO.

In Spore, you will tilt the iPhone to move your little Spore creation. You need to eat the weak and avoid creatures that can eat you in order to survive and become the best Spore creature. There will be two game modes called evolution and survival, and 35 challenge stages.

Spore for the iPhone will also include a creature creator, but I feared it would be as addicting as the PC version, so I decided to just skip it altogether (I barely had enough time as it was).

Spore will be coming out next month with Scrabble dropping sometime this month. Sudoku and Tetris apparently came out last month according to the fact sheet. I guess, whatever. The iPhone is stupid.