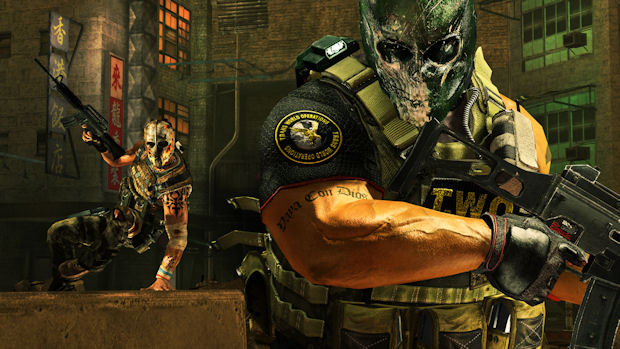 When Army of Two was released in 2008, it upset a number of people because it starred two fist-bumping mercenaries who shot terrorists in Afghanistan so that they could gold-plate their guns. Apparently, this was wrong, and Electronic Arts admits it.

“The mistake we made was we thought that what is going to make a certain type of person laugh, is going to make everybody laugh,” explains EA Montreal boss Alain Tascan. “The reality is, you can laugh off everything but not with everybody.

“When we mixed killing in North Africa, killing terrorists for money and then fist pumping and saying something funny afterwards, in a place where real life troops are dying, people just felt [that] whatever the game is, this is wrong. You can’t do that. People from the left thought we were on the right; people from the right thought we were on the left. We were able to piss off a lot of people.”

In response to the first game’s reaction, EA decided to tone down the humor for Army of Two: 40th Day. Tascan says that EA Montreal got “carried away” with the first game and that it was “inappropriate.” 40th Day should be a bit more tasteful, although from what I’ve played of it so far, it’s more tasteful only by a few notches.

Which, in my opinion, isn’t a bad thing. If EA wanted to make a game with risky, borderline-offensive humor, it should have the balls to stand by it when people get upset. I’m actually a bit disappointed to see EA Montreal groveling and denouncing what was some hilariously tasteless stuff. Trying to make everybody laugh is impossible, and you’re pretty spineless if you’re going to be afraid of making jokes because some individuals may not get it.

EA: We p***ed off a lot of people with Army of Two [Videogamer]