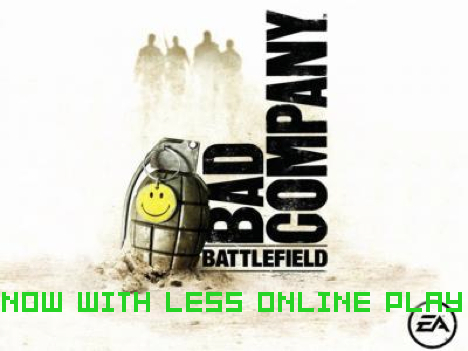 Saturday, EA issued a statement via the official Battlefield: Bad Company website, proclaiming that they are aware of connectivity issues that some players have been facing while trying to play online. The statement is written as if the tech guys live in the fictional world of Bad Company, where mercenaries carry gold bars in their pockets at all times.

We are aware that some X360 players are having issues connecting to the Bad Company servers. We’ve been monitoring stats non-stop and are working with several partners to locate any possible flashpoints and eradicate any hostiles we encounter.

The release then went on to add the most ridiculous “fix” we have ever heard.

Until we are ready to implement a permanent fix, a possible workaround is to turn off your console for approx. 20 minutes before turning it back on and connecting again.

Turning off my console for twenty minutes? What is that going to do other than allow me to whip out another game that doesn’t force me to sign on to servers outside of the Live network? I’m all about squashing bugs and tackling server problems, but treating my console like an overheated George Foreman grill is hilarious.

Have any of you been experiencing these problems? Shall we suggest another “fix” for EA?