How do you do, fellow kids?

With all the Super Bowls he’s won, it’s hard to imagine this is the first time Tom Brady has been featured on the cover of Madden. What better time than after an improbable comeback: down 28-3 in the third quarter, Brady led the New England Patriots back to defeat the Atlanta Falcons in overtime. The rally cemented Brady in many people’s minds as one of the all-time greats, or in hip young meme-speak, “G.O.A.T.”

Madden 18 releases just prior to the season on August 25, 2017. For the first time in series history, the game will run on the Frostbite Engine (presumably Frostbite 3), allowing for “stunning new stadium exteriors surrounded by vast cityscapes” according to the product description on Amazon. Also, a short clip in the trailer possibly suggests a story-based career mode like those in the NBA 2k series.

Embracing the meme, EA Sports is using “G.O.A.T.” as both a feature in the game and the name of the special edition (priced not yet confirmed). Both the standard and G.O.A.T. Edition will earn you the “full” game, one elite player from your favorite team, and five Madden Ultimate Team Squad Packs. 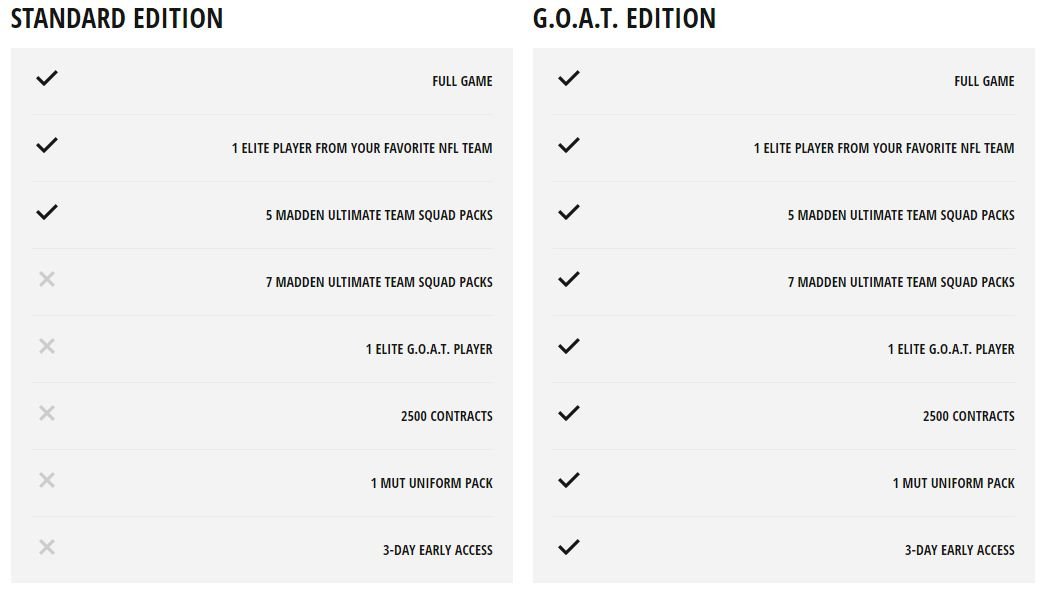 EA Access customers will get a 10% discount on the digital version and Ultimate Team Packs, as well as even earlier access on August 17 for 10 hours.

There is a superstitious myth of the “Madden curse,” where a player incurs an injury shortly after appearing on the cover of Madden. Brady knows of the curse, “I suppose there’s been some reality to that curse over the years. Hopefully I can break it. That would be pretty cool.” His team-mate, Rob Gronkowski, made the cover on the previous entry. Brady added “I don’t think Gronk’s ever been cursed by anything. He’s in pretty good shape.”

Something inside of me twinges when I see corporations or the media using memes (or anyone to be honest). It probably has something to do with capitalizing on an inside-joke people use mostly tongue-in-cheek. But then ESPN and, well, everyone started using the term seriously. But only nice, politically correct memes. You don’t see EA or ESPN using “BTFO.”