While Allistair and Ryan were busy playing Resident Evil 6, I had a chance to sit down with Producers Hiroyuki Kobayashi and Yoshiaki Hirabayashi, and Director Eiichiro Sasaki where they detailed just how the four-player co-op of Resident Evil 6 works.

There are three playable storylines focusing on a pair of a characters in each, and all the storylines are overlapping during the same time period. At certain points during the story, there will be a crossover point where four of the characters will have to work together in order to get through the level.

Yoshiaki Hirabayashi demoed just how the crossover stuff works by taking us to a point where Leon and Helena’s story crosses over with Jake and Sherry’s. Leon is looking for a man related to the bio-terror attacks, and it turns out Sherry works for the man he’s searching for. The reunion is cut short as the monster that has been chasing Jake and Sherry throughout their story has caught up to them once again.

All four lay on the assault, and after about five minutes the monster runs away. Now the group is trying to find a way out of the area they’re in, and here we see Leon and Sherry climb over a wall to find a way out. The teams can be mixed and matched, but only during these crossover points.

Once this level is over, both parties go back on their respected paths. Capcom is designing these sections so that the team you partner up with are actually other players that are at the same point you are. The game will ask for your permission before allowing others to join you, and declining the option will just throw in AI controlled characters. 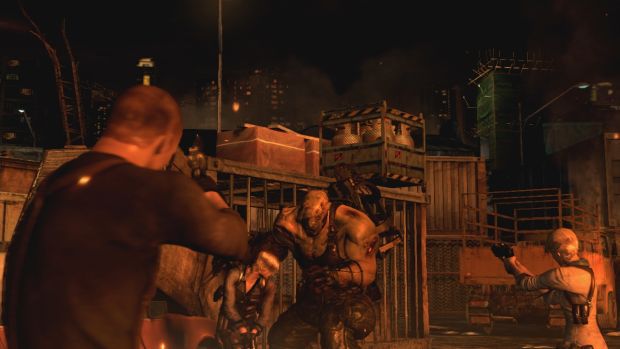 I asked the team if we’ll ever see a point where all six characters will have a crossover, but unfortunately they’re limited to just four at a time. Still, I like the idea behind mixing the storylines together like this. It makes think of Resident Evil 2 during all the crossover-like points in that story.

Aside from that, though, I am so conflicted when it comes to Resident Evil 6. The series is having an identity crisis, and despite the team stating they’re retaining the survival horror feel I just couldn’t see it. It feels like an action shooter more than anything else, and I can deal with that because I love the whole lore behind this series.

What I can’t deal with is the camera. It is just WAY too close, with your character blocking too much of the screen. That seriously needs to be fixed before the October 2 release date.