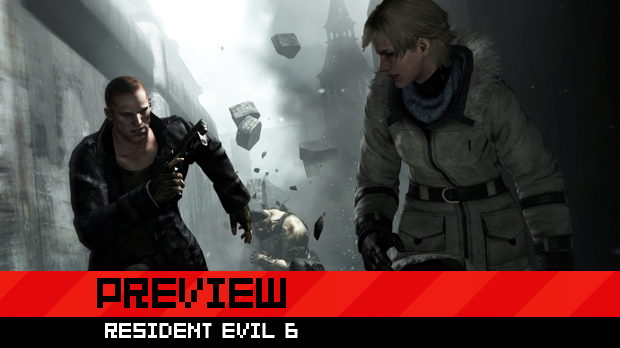 If you’re keeping track of the Resident Evil viruses, the problem this time around is the C-virus. It has spread all over the world, setting the stage for Capcom’s biggest outing for the series yet, Resident Evil 6. How big? Try six main characters, three main story campaigns, and full two-player cooperative play for all of it.

But we already knew all of that, didn’t we? What we’ll get down to here is how it plays. Capcom let us play a bit of the three story lines, each from their beginnings, giving us a better picture of what to expect in one of their biggest releases for 2012. 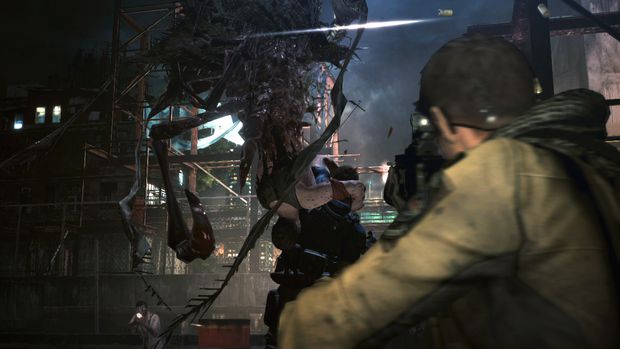 [Light spoiler warning: I’ve setup the basic groundwork for each of the three campaign’s story lines in this preview. Seeing as how only the introductory section of each story was covered, there’s practically no risk of spoiling the story here. Still, if you’d like to go into Resident Evil 6 not knowing a thing about its setting and characters, you might want to skip this preview.]

We covered Leon’s story and introductory gameplay in an earlier hands-off preview, but this time I got to control it. The player is dropped into a situation where Leon is forced to kill the President, as he has been infected with the C-virus. This puts Leon and his new partner, secret service agent Helena, in a bad situation, forcing them to escape. We had to haul ass out of the university where the killing happened, but not before encountering our first zombies.

The control in Resident Evil 6 hasn’t changed as much as I thought it would. The movement seems to be largely similar to that of Resident Evil 5, though the aiming might have improved a bit. I felt the movement in RE5 was a bit soupy and sluggish, and it’s maybe a bit less so in this game, though you’ll never really feel like you’re running fast enough when you need to. That said, the control seems to nicely straddle that line between survival horror and standard third-person shooter. You can’t have both. 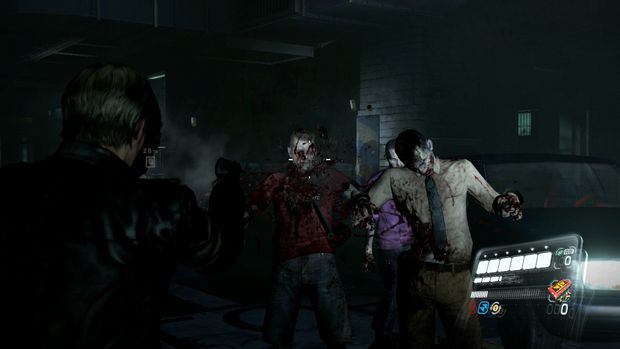 New attack positions have been added to the control scheme that lets characters take different stances. One new position let Leon jump to the floor to lie on his back, allowing him to shoot upwards. This position was easy to move into (holding back on the analog stick and pressing a button), but never felt particularly useful. The ability to aim and shoot is the same as on two feet, but his mobility suffers, which makes me wonder why you wouldn’t want to stay upright the whole time. It could be that later situations will make full use of this, and other positions.

This time around Capcom is promising a return to classic horror, with all the creepy groans and haunted house-type pop-out events that we loved in the early games. And from what I’ve seen so far, I definitely appreciate their efforts, but an on-screen floating waypoint and distance countdown gauge really detracted from the environment. This choice seems strange given that they’ve created a nice and compact HUD that sits unobtrusively in the bottom left or right (the position is switchable, as is the character’s stance, by pushing in the right analog stick) corner of the screen. Hopefully we’ll be able to switch off this waypoint marker. 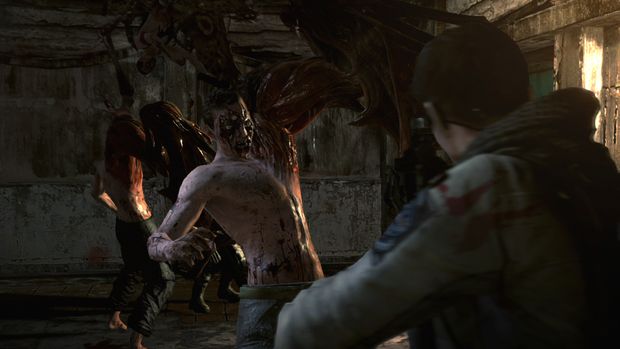 It took me a minute or two to recognize Chris Redfield. In fact, it wasn’t until Piers Nivans, a BSAA agent that was sent to retrieve Chris from his hiatus in Eastern Europe, began talking to him that it clicked for me. Chris had been drinking, and in calling for another round, the bartender cut him off. He was kicked out of the bar, but refused to leave.

This being a seedy bar, things got rough, almost escalating into a fight. Piers stopped it, though. He had been searching for Chris for six months, and though he was disappointed by his drunken state, he did not intend to back down. He insisted that Chris belonged at the BSAA, and was needed. It turned out that nearly everyone in the bar was also a BSAA agent, and they were all there to bring him back home — by force, if needed. 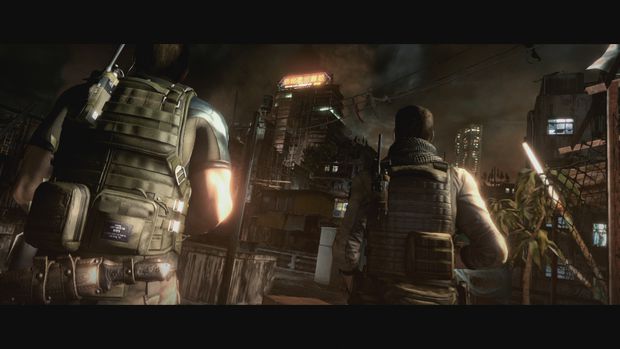 While Leon’s opening play showed some strong relation to the earlier series titles, Chris’ first mission had a definite Resident Evil 5 feel. He and his team started out in what looked to be a Chinese city, on the rooftop of some office building. Their goal was to retrieve hostages, but things quickly got out of control, with countless soldiers surrounding the team, forcing them into rooftop gunfights. Climbing from scaffoldings and rooftop clearings, I took out soldiers with varied guns, all while smashing crates to look for ammo and supplies. Other than finding skill points in these crates, nothing was notable about Chris’ opening play. No monsters, no scares, and little tension. Hopefully it ramps up just beyond where Capcom cut us off.

New character Jake’ Muller’s opening game play was more my speed, and a better example of how this game is trying to return to the series’ scarier days. From our first preview session I thought Jake would be a bit of a sourpuss, but it turns out that he’s funny, and something of a wisecracker. Beyond that, the dynamic between Jake and Sherry Birkin was fun, especially in the dialogue department. The game’s feel, in both tone, setting and play, reminded me of Resident Evil 4, Also, having Sherry around reminded me of rolling with Ashley, though she proved to be far more helpful and infinitely less annoying. 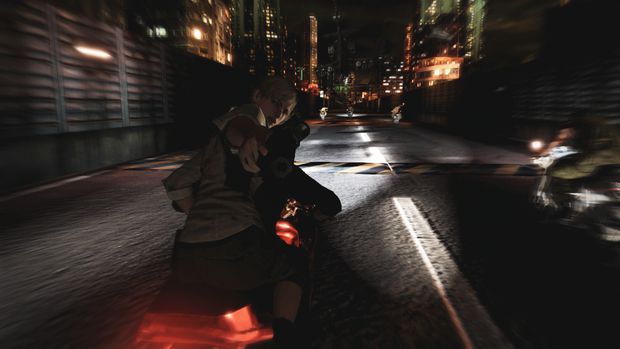 The two seem to be working together (team lifting via assist prompts) to escape from a compound, but they’re interrupted by a strange, muscle-y, claw wielding beast. It tries to attack the duo, kicking off a classic Resident Evil chase sequence, where Jake had to do things like dodge obstacles and shoot explosive barrels to slow their pursuer down. The duo continued to converse through the chase, even as this monster crushes a body to cause blood to rain down in their path. When Sherry insists that they take her path, Jake cracks that “It’s always something with women.”

While my time with each story branch was short, I already like where this is going. The good news here is that I suspect that fans longing for the “old days” of the franchise will be right there with me. It already seems more fun, more dramatic, and slightly less third-person shooter-y. If you look back from the very beginning until now, Capcom has struggled with transitioning from point-and-click monster B-movie stories to full-blown survival horror. It now looks like they’re starting to figure out how to bring the Resident Evil franchise forward.