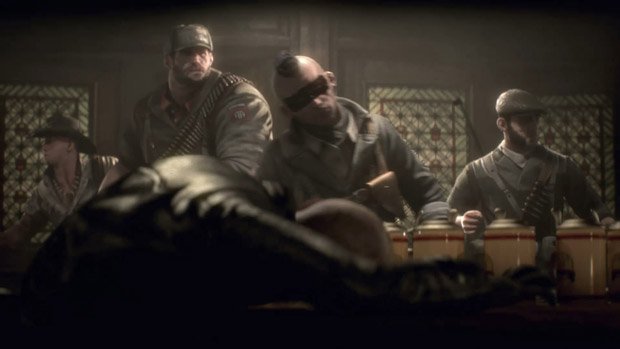 Before diving into just how retarded awesome Furious 4 is, know that Gearbox isn’t done with the main Brothers in Arms storyline. They’ll be getting back to that series when the time is right, but in the mean time they’re going to be telling us a new, over-the-top story with Furious 4.

Four specialized soldiers are sent directly into the heart of Germany with one mission: Kill Hitler.

Think Bulletstorm and Borderlands crossed with Inglorious Basterds. Furious 4 has that same vibe of Quentin Tarantino’s last flick with the gameplay style of Bulletstorm crossed with Borderlands’s co-op goodness. Furious 4 isn’t set in reality so you’ll see lots of crazy things, such as Nazi soldiers flying around with jetpacks. On that note about Tarantino, there’s even a narrator that comes on at various points and gives a Grindhouse style of dialogue about what’s going on in the moment.

Each of the four main characters have different traits and the main one Gearbox focused on was Montana, a large man making use of a chain gun, axe, chainsaw and bear traps. Yes, bear traps. Enemies will actually get stuck in the bear traps making for easy kills.

Killing enemies earns you points and those points will be used to upgrade your characters abilities and weapons. One example of an upgrade for Montana is that he can attach grenades to his bear traps. So when the bear trap captures a guy, the grenade will go off a few seconds later. Don’t you just love the sadism?

Furious 4 is a four-player co-op experience, but if you’re lacking enough friends the game will fill the role with AI buddies. For the most part players can simply focus on their own thing, but there will be moments that will require team actions. These team actions slow the game down as you burst into a room and take out unsuspecting Nazis.

That’s the basic core of Brothers in Arms: Furious 4. It’s a crazy ride with crazy weapons with lots of Nazi murdering. This, like many other titles at E3, wasn’t playable so I’m hesitant on raising too much praise for the game. But the initial impression is that it’s looking really fun and I hope the entire game will be able to keep up the crazy pace that was presented to press.