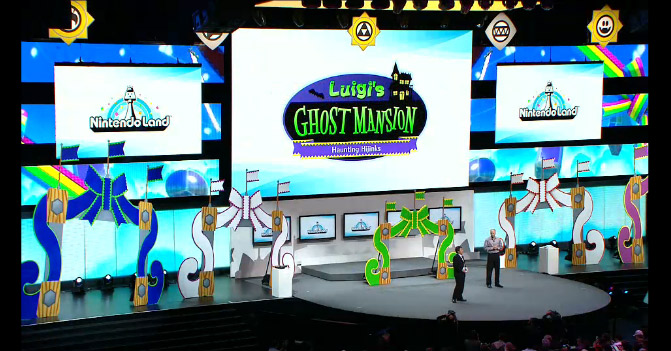 Trying to communicate the concept of Wii U, and what can really be done with the tech, is not an easy task. As with Wii Sports and the original Wii before it, Nintendo is hoping to demonstrate the potential of the gamepad/tablet hybrid with a minigame collection called NintendoLand.

One thing that I think is most excited about the Wii U is asymmetric multiplayer: giving one person more information, and more tools than the others. Luigi’s Ghost Mansion is the first piece of software we’ve seen that utilizes the controller in this way.

One player will use the tablet and play the role of the “ghost,” chasing down other players and knocking them out. The ghost is invisible mot of the time, however. When everyone is knocked out, the ghost wins.

The people on the other hand, will have to use the Wii Remote to shine a flashlight at where they think the ghost is, revealing her. Batteries on the light run out, though, so players need to take care not waste time pointing at nothing.

It’s a pretty interesting concept, and I can only hope that third parties start using this kind of functionality to bring truly innovative content to the Wii U. That said, I’m still a skeptic.