Far Cry was never a series I thought I’d want to play in four player co-op, but, then again, there aren’t many games that don’t benefit from it. While I’d hate to see three online chuckleheads ruin the atmosphere and immersion of the single-player, I’m perfectly okay with a dedicated co-op mode, especially when it is done with some style and ingenuity.

FC3’s co-op is much more Uncharted than it is Call of Duty, though it does offer some twists on the format. I got to play a couple missions alongside three E3-stationed press humans. I’m hardly enthusiastic about the co-op, but it’s the type of thing where you just say, “Hmrf. I guess, it’s neat.” 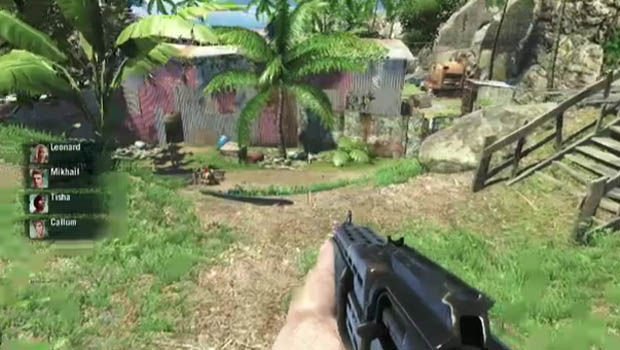 Like Uncharted, the co-op campaign revolves around small objectives, such as blowing up a bridge or protecting a moving train. It’s all pretty standard co-op stuff, at this point: Choose your loadout, revive your buddies, etc. FC3 does do some neat stuff with it, though. Well, maybe that’s a bit generous because it’s really only one neat thing: competitive events.

These arcade-like scenarios are sporadically placed in co-op matches and help alter the flow of the game. For instance, upon reaching a new area in the demo, me and my teammates were locked in place and given bolt-action sniper rifles. We took aim at an incoming crowd of enemies and shot at them from afar, earning points based on kills and headshot bonuses. This transition to a literal points-based shooting gallery was a novelty, but, in the very least, it was a fun novelty.

Even with this gimmick tossed aside, Ubisoft are doing co-op right with Far Cry 3. It’s detached from the main campaign and there’s variety in objectives. That’s all I ever really look for in co-op shooters, these days. It’s not something I’d exclusively pick up the game for, but it’s a nice little bonus.

In a game as unnerving and lonely as Far Cry 3, it’s nice to know you can hop online and kill some foreigners together with your friends.