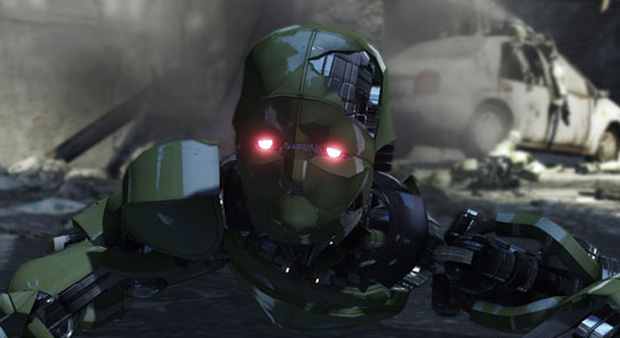 Not a lot has been seen of the SEGA-published Binary Domain since the first trailer released last year. Behind closed doors, however, we got a chance to see the game in action and get to grips with this third-person-shooter involving sentient robots.

I will say this — I really want to like the game.

I want to like Binary Domain because it speaks to me on a narrative and stylistic level. The story revolves around robots that have been produced to replicate humans in terms of emotions and intelligence. Unfortunately, the robots inherit ambition and ego as well, and thus seek to usher in the next stage of human evolution.

Stories about robots gaining sentience and overthrowing their human masters always appeal to me, and the intro cinematic to Binary Domain is pulled off with a great sense of flare, even if it’s not wholly original. One particular section shows an angry, emotional man waving a gun. He looks and acts human, but in a later shot, half his face his missing and revealing a metallic skull underneath. This sense of lines blurring between humans and robots is carried through into the logo, which has a skull split in half — one side human and the other cybernetic.

From what I’ve seen, Binary Domain is a decent third person shooter in which cover is used and enemy robots take procedural damage. If you shoot a robot’s leg, it can come off and the opponent could crawl toward you and grab at your ankles. I love how creepy the enemy robots can be. The regular drone moves in a way that clearly tries to mimic human movement, but doesn’t quite work thanks to its thin, lanky stature and clinical motions. The game is pre-alpha so the visuals are rough, but if they can improve the graphics and animations, these robots could be potentially unnerving foes.

They are foes that you can also shoot the heads off of, and they will wander aimlessly around the environment. They then run the risk of shooting their allies, who will identify them as a threat and attempt to kill. I hope they add more neat tricks like that.

Players take on the role of Dan, a guy sent into Tokyo to apprehend a man suspected of building illegal robots that resemble humans. You can choose a variety of squadmates — a heavy weapons guy, a sniper, a tactician and a demolitions officer — who each have their own skills. Before each level you can choose from various skills to compliment your playstyle,

The biggest feature is voice recognition. Squad mates will respond to your commands via a simple headset. You can call an ally by name and then shout out a simple order such as “Charge” to let them do their thing. If you’re downed, you can shout “Help” for a recovery, and you can even say “Okay” to a team mate’s suggestion. It is not complex stuff at all, but it is clean and it works.

Binary Domain is a game that excites me in concept, but I want to remain apprehensive about its chances as a final product. I definitely want to love it, and I will be keeping an eye on it, because I think this game is definitely onto something. It all hinges on whether or not the game develops a compelling story and does unique things with its promisingly creepy robot enemies. If it just aims for a simple shooter, it won’t do well. If it aims higher, it could achieve something special.

I wish it the very best of luck.