Another event, another Aliens: Colonial Marines preview from yours truly. I caught my first glimpse of this interactive Aliens sequel one year ago during E3 2011, and I was suitably impressed. Of course, watching a hands-off demo is not the same as getting my hands on it, and I did just that earlier this year in Dallas.

SEGA had a new playable demo on this year’s E3 show floor, with a previously unseen map and a fresher game build. You already know what I think, right?

No … actually, you were right the first time. 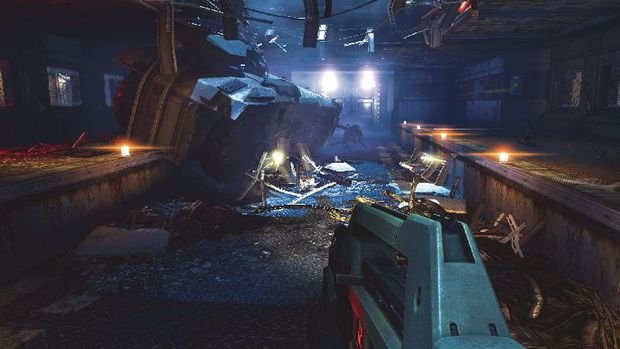 The new map was a lot more open than the enclosed industrial space I played with in Dallas. Set in an outdoors area, the windswept surface of LV-426 makes for an oppressive arena, and one that is perfect for Xenomorph players.

The dark and stormy environment seemed designed to give the Aliens a distinct advantage, one that allows them to utilize their stealthy abilities and make up for their lack of firepower. If a Marine can spot a Xeno from a good enough distance, there’s no doubt that the Xeno will go down ignobly. However, with a landscape rich in dark ridges and slick surfaces, it can be pretty damn hard to keep track of the intended prey until it’s far too late.

This map has been designed to encourage paranoia as well. More than once, I was distracted by a torn flag that rippled in the wind with the threatening motions of an Alien warrior’s tail. These distractions keep the human team on edge, and allow the Xenomorphs to close in for the kill. Even armed with a motion tracker, it can be damn difficult to know exactly where the attack will come from. That isn’t to say a Marine is helpless, of course — a coordinated team that sticks together has the weaponry to defend itself — but should the group get picked apart piecemeal, it’s all over.

Nailing the balance between two distinctly different teams with distinguished play styles is difficult, but Gearbox is managing to pull it off. Aliens have the home advantage, but humans have the bullets to hold them off. At this stage, it seems that it all comes down to who works together best, as the Gearbox team clearly demonstrated when it guiltlessly wiped the floor with the E3 attendees on my side. It is promising stuff indeed.

With a new build comes new graphical polish, and the game is starting to look even more incredible. The amount of visual feedback on screen in this map really helped create a bitter and harsh environment, something truly evocative of Aliens. The creatures themselves are looking sharper than ever, and their execution kills are deliciously violent. This is going to be one hell of a polished game by the time Gearbox is finally finished with it.

So, it’s safe to say that I am still supremely excited for Aliens: Colonial Marines and remain ever hopeful that we’re going to get a terrific new game for the franchise. No surprises there, but a little reaffirmation is always a welcome sight, yes?