The original Sniper: Ghost Warrior was a polarizing game that got as much right as it got wrong. The sniping mechanics were praised, but the run-and-gun segments, which inevitably invited Modern Warfare comparisons, were slammed. As a whole, it was an incredibly difficult game that demanded patience a lot of players couldn’t muster.

City Interactive has been working to make sure that Sniper: Ghost Warrior 2 is the game the original was trying to be. Run-and-gunning is out entirely, allowing the team to make this a pure sniping experience. And for good measure, the game will be running on CryENGINE 3. 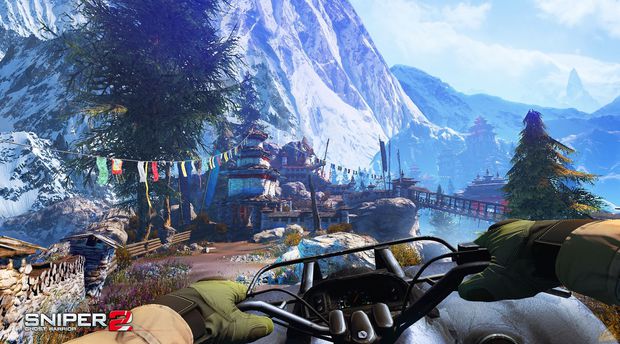 Unfortunately, no one was able to test the game for themselves, but we got to catch a representative-controlled tech demo behind closed doors.

If nothing else, this game is beautiful. Yes, this is the latest CryENGINE at work, but I’m not just talking about polygons and textures. The level we were shown dropped us into the Himalayas, rich in lush foliage, Tibetan statues and temples, and bluish snow-capped mountains in the distance. I’ve been so jaded by the whole “gritty brown shooter” movement that this parade of colors was mind-blowing.

The rep crossed through a wooded area and sniped a couple of guards, triggering the bullet cam mode from the previous game in which time slows and the camera follows the shot as it hits the target. We were told that some changes would be made, that the angle of the bullet cam was not final and that the targeted enemies would exhibit better ragdoll physics. There was also a scripted knife-in-back stealth kill sequence that would be properly implemented in the final build.

The dialog was laughably wooden. Our sniper made a headshot and his spotter replied, “Nice one. Next beer’s on me,” in the flattest, most uninterested voice imaginable. Our rep mentioned that this was temporary voice work recorded specifically for the demo, but given how poorly the VAs performed in the previous game, I’m not expecting much improvement.

New elements include vehicle sections and swappable scopes for various situations. In the demo, the rep played around with the thermal scope to help him spot heat signatures in dark environments. There will also be a night vision scope, but no other toys were mentioned beyond that.

This was obviously a very, very early demo with a lot of placeholder or scripted elements. For example, after taking out a helicopter pilot, his copter just sort of floated to the ground and squirted out a tiny plume of smoke. I think all City Interactive wanted to do was show off how pretty the game is shaping up to be. The good news is they’ve got that covered, but they still need to prove that they learned their lessons from the last one. We’ll see.