Lionhead Studios is no stranger to making spin-offs for Fable. The first was an Xbox Live Arcade tie-in with Fable II called Pub Games, which was a collection of mini-games that appeared in the game and would allow you to carry over the gold to your character that you had won in Pub Games. Next up was last month’s Fable Heroes: a family-friendly entry into the series that didn’t exactly impress us.

With Fable: The Journey, Lionhead is crafting their most ambitious Fable yet. Now running on the Unreal Engine, it also happens to be the most beautiful Fable. When Peter Molyneux talked up Fable: The Journey last year, he claimed it was not on-rails. On the contrary, it was quite clear that wasn’t exactly the case after what we saw from.

After my hands-on with The Journey this week, it’s clear that the game is not on-rails. Well, sort of.

I’m dropped into a later point in the game, five years after Fable III. The Corruption that had plagued Albion before is back, and it has taken up shop in The Spire. Taking the role of Gabriel (an “accidental hero”), I find myself in his horse carriage, escaping from an unknown entity. I set off by reaching my arms out and snapping the reins on my two horses. As we travel, every once in a while we are faced with a choice to either go left or right. Obstacles get in the way, and the only way to avoid them is by directing the horses left by pulling in my left arm and stretching out my right, and vice versa for turning right.

After traveling alongside a few different wooded areas and around a huge mountain bend (which you can fall off and die), I pick up quite a few experience orbs and sprint-extending objects. Eventually, Gabriel comes to a stop after he spots something in the woods and out comes a defenseless, frightened Theresa. This is something we’ve never seen from her character before and it’s something we’ll be seeing quite a bit in the end product.

Theresa gets in the carriage and we head off in a hurry as the Corruption comes out of nowhere, surrounding us in no time at all. I whip my horse into motion and we’re well on our way to get the hell out of there. The Corruption attempts to swallow us and block our path, but it’s nothing I can’t handle after mastering the reins from earlier. After a mix of strategically snapping the reins like crazy and grabbing a plethora of sprint extenders, we escape the Corruption at the end of the first part of the demo. 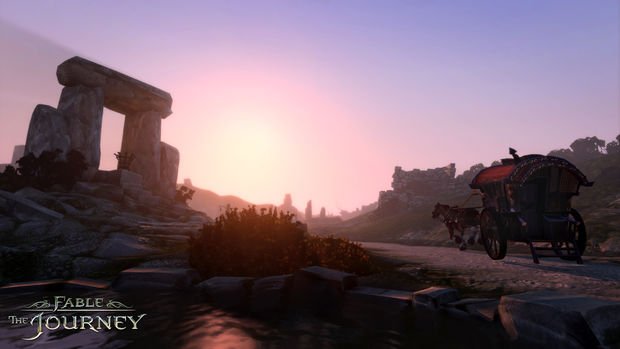 Like Fable II and III, Lionhead wants the player to create an emotional bond with an animal companion in the game. Before, it was with the dogs. Now, you have two horses. To help create this bond, Lionhead made it so that if you’re too harsh on your horses and force them to sprint too hard and fast, you will eventually see scars appear on them. I remember how I managed to escape the Corruption earlier and, while it was essential for survival, a sense of regret overcomes me.

Our carriage rolls up in front of a giant ancient door that has two orange and blue orbs each. Gabriel gets out and stands in front of the door. This is where we learn to use our two spells. In the left hand, a blue spell will appear once raised (or right, if you’re right-handed). I clear the two blue orbs by pushing my hand forward at the door. Well, after I miss by a mile a few times and embarrass myself, of course. After a few shots, I’ve got the hang of things, though.

Now for those orange orbs. I have to first pull out the blue spell and turn it into a fire spell. There’s two ways this can be done: first, you can wave your hand from right to left quickly or you can utilize the voice capabilities of the Kinect. Yelling “Fire!”, “Fire spell!”, “Flame on!” or any variant of a fire-related term you can think of will turn it into that orange glowing ball of flame. I make quick work of the last orbs and Theresa lets me know she’ll wait outside, leaving me to brave the unexplored cave.

Gabriel starts into the cave and almost immediately he’s attacked by Hollow Men. They’re a bit too close for comfort, so I raise my right hand to bring up the push spell and give myself a bit of breathing room. I can also use the right-handed spell like a whip to latch onto the Hollow Men and rip apart their limbs piece by piece. Or one can just shoot repeatedly at the enemies, as you do. 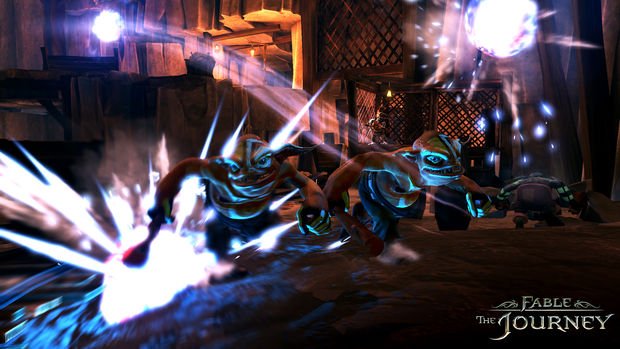 After a couple waves of Hollow Men, Gabriel makes his way up a short flight of stairs and reaches his hands into an altar that contains a shallow pool of water. This is how the player will receive new spells throughout the game. The spell I’m given is activated by reaching behind my head, as if I’m holding a javelin. This makes a spear appear. Yeah, I’m ready to rid this cave of Hollow Men.

While spearing a wave of Hollow Men on a cliff above me, my terrible aim gets on my nerves. I found out that you can apply an “after touch” to your spell that you cast. If timed correctly, this can turn your horrible aiming into stylish kills.

I finally make my way to the end of the cave, where a giant rock troll is residing. He sends handfuls of hollow men and throws rocks at me, which I can either block, push back, or dodge by leaning left or right to find cover. I eventually spot a giant sword conveniently placed above the troll’s head. One spear was all it took to make the sword stab the troll like a hot knife cutting into an ice cream cake. To put him out of his misery, I latched onto the sword with my right-handed spell and pulled it further into his back and watched the life fade from his neon-blue eyes.

Being a Fable game, The Journey involves exploring. Even though you cannot explicitly pick every step you take, you can pick paths, slow down, speed up, figure out new ways to handle each combat encounter, and explore the many ways to interact with your own spells. Even though the game is only 10-15 hours long, Lionhead is creating the biggest Fable they’ve ever made. The Kinect controls were hard to get used to at first, but once I was comfortable with them I felt overtly powerful I could handle anything with the palette I was given.