The “market” allegedly says that adventure games don’t sell anymore, that Ron Gilbert has had his day, and that Double Fine makes games nobody wants. Well, as Tim Schafer continues counting his coppers after raking in a ton of loot on Kickstarter, we have Sega blessing his studio with the means to create a brand-new Gilbert game: The Cave.

It looks like a platformer, but make no mistake — this is an adventure game, and I do believe it’s going to turn a lot of heads when it’s finally ready for consumption. 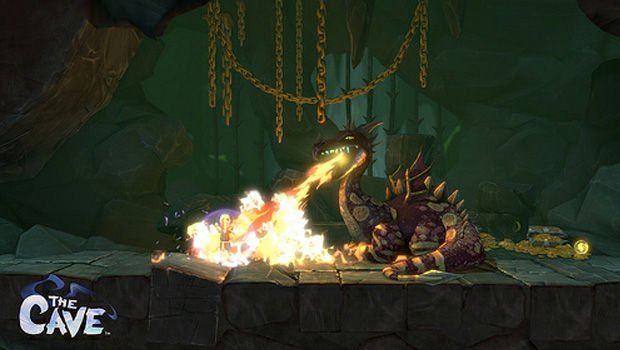 The titular cave is more than just a location — it is a sentient being, the narrative character that guides us on whatever quest we choose to undertake. The Cave to which the game’s name refers is a source of great power, an environment filled with trials which, when completed, will grant a successful hero anything he or she desires. So it is that seven potential protagonists intend to journey into the stony depths, each with a prize in mind.

The Monk seeks enlightenment, the Hillbilly is simply looking for love, the Scientist wants the answer to a breakthrough, the Time Traveler needs to stop an inevitable catastrophe, the Knight demands a sword with unrivaled power, the Adventurer seeks treasure, and the Twins wish only to find their parents. Players can choose up to three characters for the adventure, and will need to switch between them in order to solve a variety of puzzles — or play cooperatively with others.

As well as a personal goal and special quest areas within the cave, each character also has a unique power. In the demo, we got to see the Knight’s “Guardian Angel” ability, which protects him from harm. This was useful for distracting a dragon in one cavern, allowing another character to sneak behind it and grab a crucial quest item. While there are light platforming sequences, the game’s heart is rooted firmly in the desire to provide a traditional adventure experience, with all manner of item and logic puzzles in place to tax the mind. Having to work with three characters in tandem is an important element in solving each task, and it should be interesting to see how different combinations of protagonists can work together.

The interface is fairly simple. Characters run, jump, and can pick up a single item at a time as well as manipulate levers and switches. One puzzle involves a monster that blocks the way forward and will chew heroes up as soon as they approach (death is but an inconvenience, as characters will respawn a short distance away). In order to cross, the player will need to find a bucket of water to put in a vending machine so that a hot dog can be obtained. The hot dog can then be placed on a spike that the monster will perch on to begin eating. Up above the snacking creature, another character stands near a lever that can be pulled to drop a claw mechanism. The claw grabs the beast and hoists it harmlessly into the air, allowing for safe passage. A fairly simple puzzle, but one that gives an idea of how teamwork plays a vital role.

The all-important element of humor seems to be firmly in place, with aforementioned vending machines dispensing giant, monster-baiting hot dogs and dragons running amok to cause hilariously violent chaos. The silly comedy is punctuated with a beautiful art style full of exaggerated features and wild, swinging animation that reminds me of old claymation games such as The Neverhood or Skullmonkeys. While no clay is to be found in this game, the graphics are incredibly reminiscent of that style and tug at one’s nostalgic heartstrings. The cartoon designs and vibrant colors, especially on the various beasts inhabiting the cave, are fantastic to behold.

Then of course, the name-drops can be easily had. Character choices similar to Maniac Mansion, scrolling item puzzles reminiscent of the Dizzy series — there is a lot of old school love, and plenty of comparisons, to be made. Gamers of the ’80s and ’90s might just find a crack in their jaded stone hearts when observing this one.

The Cave had me smiling all throughout the demo, and I have a feeling that adventure fans are going to be totally won over by the game’s welcome nostalgia and charming humor. The market may claim that adventure games are dead, but The Cave looks set to keep it joyfully alive.