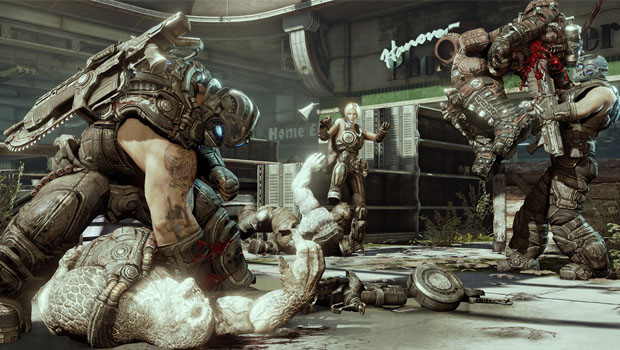 I was in the presence of the esteemed Cliff Bleszinski to get a preview gawp at Gears of War 3‘s campaign this week. The narrative mode of Gears is what attracted to me to the series in the first place, and I feel it odd that so many gamers write it off. I said this to Cliff, who expressed his own surprise at the situation.

“Yeah, I don’t get it either,” he said. “People say, ‘yeah, I tried the campaign, but whatever.’ Gears of War 3‘s campaign is very important to us, and we’re going to have the longest damn campaign of the series in Gears 3. With these Pulp Fiction elements we’re adding, you get a better perspective of characters like Cole and Baird.

“But yeah, I dont get why people write it off either. (Laughs) The amount of work we put into it …”

Those “Pulp Fiction” elements revolve around the fact that there are two squads in Gears 3. We get to see events from the eyes of both Marcus and Cole’s teams sequentially, so events often play out more than once but from different locations and with alternate perspectives.

More impressions of Gears 3‘s campaign are coming soon. I don’t get why people look down on the Gears narrative either, because it’s some bloody good fun!