Injustice: Gods Among Us stands out for its bold twists on the genre, not its cast of DC characters. After getting my hands on the game, I was pleasantly surprised by how great it looks and plays. If you enjoyed NetherRealm’s gnarly yet polished Mortal Kombat reboot, you will likely fall in love with Injustice‘s bombastic, violent combat.

Injustice takes what worked so well in Mortal Kombat and adds in environmental damage and character-specific items. Sure, we’ve seen characters thrown through walls into new arenas in Dead or Alive. We’ve also seen crazy, character-specific gimmicks in BlazBlue. The combination of all these elements filtered through NetherRealm’s level of polish and playability is what makes Injustice stand out.

The first thing you’ll notice is that it looks a lot like Mortal Kombat and it plays like it, too. This isn’t a bad thing at all, but before you think this is another middling DC superhero game like Mortal Kombat vs. DC Universe, there are some things you should know.

For starters, the game looks better with improved lighting and texture work; the costumes have a lot of detail and depth, looking convincingly lived-in and real. 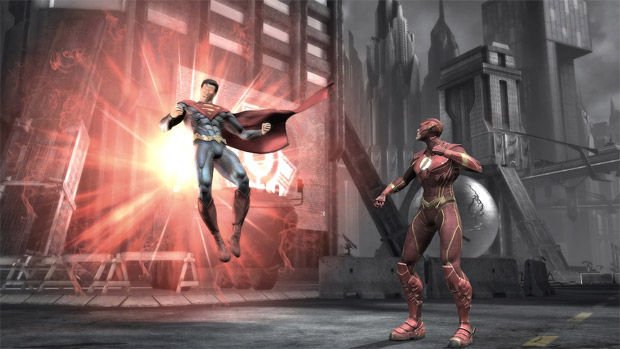 It probably would be enough to just be pretty, but Injustice is hoping to find a new audience of fighting game fans, not just please the old one. NetherRealm is attempting this in a couple ways. I’ve never seen a fighting game with as much spectacle and environmental interaction as Injustice. It’s closer to Power Stone than Dead or Alive in this respect. Depending on the area of a stage — which there are typically two to three of — there are contextual environmental attacks you can attempt. Even crazier, the type of character you have will also alter the possibilities.

For instance, Batman can take an opponent’s head and bash it into a car nearby. However, Superman can then pick-up the car and toss it across the screen. There are a lot of these sorts of contextual attacks, which change the flow of combat. Some of them open up over time, like grenades that fall out of Batman’s weapon arsenal once enough damage is done within its vicinity. Almost all of these attacks are accessible to all players, so the playing field is evened out. In other words, you won’t be picking up a bazooka and spamming it, a la Super Smash Bros.

Unlike MKvDCU, Injustice is a pretty gnarly game with some vicious attacks. When Solomon Grundy isn’t pulling knives from his back, he’s ripping out a tombstone from his guts and beating people with it. Then there are the absolutely insane super moves — taking the place of Mortal Kombat‘s X-ray attacks — that go above and beyond anything I’ve seen in a 3D fighter before.

As Flash, the camera pans out to show the speedy hero run across the globe and then it zooms back in to show him use that momentum through a deadly uppercut. Likewise, Superman lifts his opponent into space and then pile drives him to the ground. 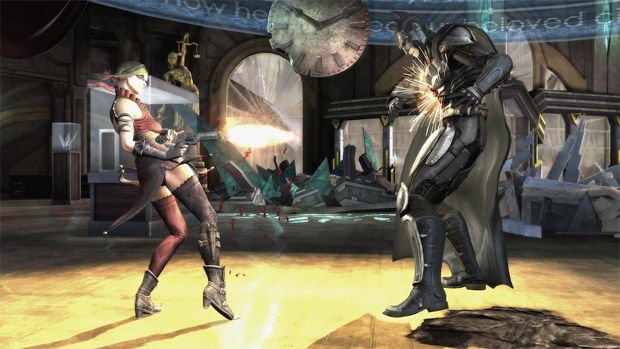 Injustice has simplified Mortal Kombat‘s already accessible combat. Now there are only three attack buttons and a fourth button for character-specific weapons. Harley Quinn has a gift box with a randomized surprise inside, while Batman has batarangs and grappling hooks he can use to stun an enemy.

For being such an early demo, Injustice felt great and had the same polish that made last year’s Mortal Kombat reboot such a pleasure to play. Kicking an enemy through an office complex and into the next arena looks incredibly elaborate, but all these environmental moves are simple to pull off. It’s just a matter of timing and placement, like everything else in a good fighting game.

Balance is key to the genre and there is a good reason why most developers have shied away from this type of complicated contextual fighting environment. I figured all this stuff would be optional, only there for casual players who want a more heightened, cinematic fight. NetherRealm insists, however, that all of this is integral to the game and will likely not be optional.

Instead, they plan to balance it all and make it work. If they achieve this, Injustice could usher in a new era of fighting games that appeal to mainstream action junkies while still capturing the interest of fighting game fans that have followed Ed Boon’s work over the years.