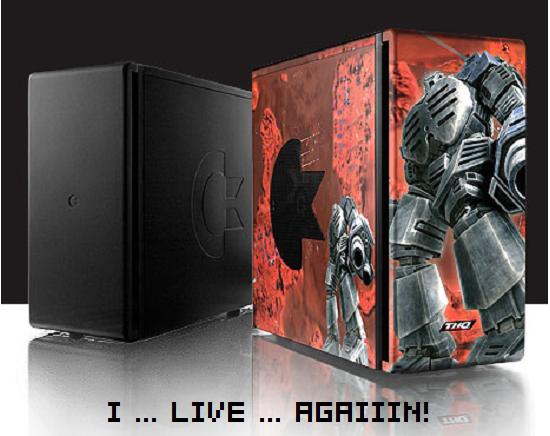 The brand name Commodore may not mean a lot to anyone who’s got into gaming over the last couple of console generations, but to wizened old gamers of a certain age *cough*Yes me*cough*, its mere utterance instantly fires up a Pavlovian response of giggling retro joy. For a whole generation of players, Commodore is the name synonymous with their introduction to the pastime we all love. Between the C64 and the Amiga there was an almost endless wealth of quality games to be had through the ’80s and ’90s, with a fantastic community culture built around them, and the aftershocks of that period can still be felt in the industry today through surviving series such as Lemmings and Speedball.

It is then with no small amount of embarrassing bleary-eyed nostalgic contentment that I bring you the news that the company is set to make a US comeback within but months. As Dale reported in March, Commodore is relaunched its name in the market which made it in the first place with a new Commodore Gaming range of PCs. These hit Europe in March, and the North American launch is now just around the corner, cued up for the third quarter of this year.

There will be four standard models named G, GS, GX and XX. which will range from entry level to high end respectively, but all will be customizable to order. Commodore has also taken a leaf out of Microsoft’s book by providing changeable decorative bodywork for the whole range. The machines are going to be available for demo this week in Santa Monica, though strangely enough, not as part of E3.

It’s important to note though, that this new Commodore range is not to be confused with the proposed relaunch of the Amiga, as the rights to that brand are now held by separate entity Amiga Inc. Of course, Commodore Gaming will never be the same as playing on a dedicated Commodore system like we did in the old days, but there’ll definitely be something satisfying about playing games on a machine with the old logo again. And if we get some emulators going and squint, it’ll be almost like being twelve again.