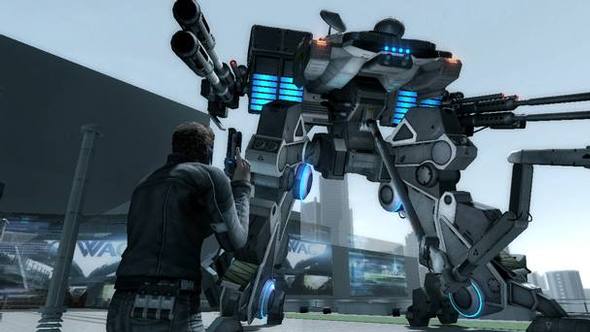 We haven’t heard much at all about MINDJACK until this year’s E3, but now we have a launch trailer (above) and on floor gameplay (below). As you can see the main catch of the game is the ability to take over the bodies of NPC in the game and then play as them. This isn’t really a new concept as it was done in games like Geist and Messiah, but it’s still a cool mechanic none the less.

The multiplayer, which was playable on the show floor, is what might set it apart even further, offering co-op gameplay and a unique take on multiplayer. See, other players can jump into your single player campaign (mindjacking, I suppose) at any time and play against you in your campaign. It’s a very interesting concept that could easily fall flat on its face. There’s also a standard multiplayer mode, but it seems that it is based on scoring points by jacking into the most bodies and not solely on killing others.

I’m also hoping that the ridiculous cheesiness in the trailer above is there because the game is intentionally cheesy, but I doubt it since it’s a Square Enix game. Hopefully, the quirks are good ones and not bad.