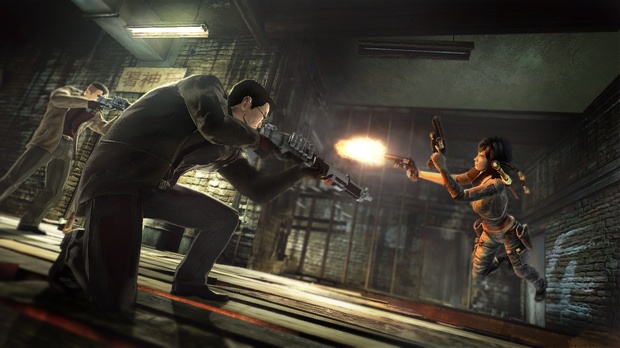 Although Joseph may not like the title of WET, his article did you give the basics of what the title is about. How does the title look and play, though, is what’s important.

The demo had three different levels to play through: A beginning tutorial style level which ran you through some of the basic moves and introduced you to the character’s intro storyline, the Rage Mode level, and a high-speed car hopping shoot-em-up level.

The tutorial level has you jumping and sliding all over while trying to take out the bad guys. What you learn in this stage is the play mechanic of Rubi’s (main character) moves. While she can wield two pistols at the same time, there is no enemy character lock-on when moving around normally. When you jump or slide and start shooting, then one of your guns locks-on to an enemy while the other can be aimed in any direction to take down two bad guys at once. The controls are graciously uncomplicated and easy to use, which is good since you can rack up combo shots and receive points for them. A little bit later, you gain the ability to use a sword, which is great for up close enemy take down.

The Rage Mode level was just a quick showcasing of how Rubi goes into a stylized fighting mode that enhances her speed and agility. The level was pretty short, but its red cell-shaded style looked nice. Since it was just a quick demo, it’s not apparent how much, or how often, it will be implemented in the title, but it does seem to add variety.

Speaking of variety, the car hopping highway level was super awesome. Rubi rides on the top of one moving car to the next, chasing down the boss who is speeding away. Keeping the movement set to QTEs for moving between the cars kept the pace fast, while also allowing you to focus on shooting enemies.

For the most part, Rubi controls a lot like the latest Prince of Persia, with its jumping and wall running antics, but feels almost exactly like you’re in John Woo’s Hardboiled at the same time. The Grindhouse art style looks pretty good, but the gameplay was my favorite part of the whole demo. Hopefully the total package will live up to what was shown.