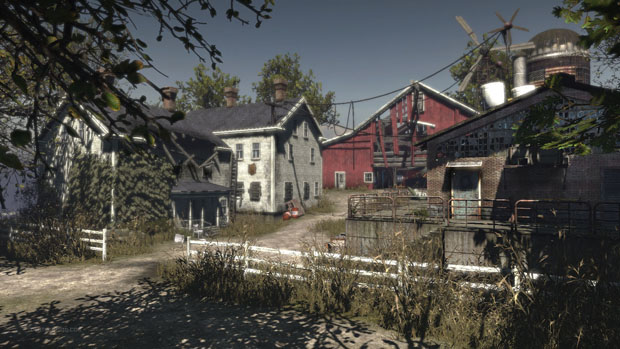 THQ invited us into a mini-theater during a meeting to show off Homefront, a new first-person shooter coming from Kaos Studios. We didn’t know what to expect going in, but we came out impressed, and now feel that this shooter could be a standout from the already crowded FPS market when it finally releases on the Xbox 360, PS3, and PC in the near future.

The year is 2027, and North Korea has somehow taken over South Korea…and then North America. This Korean force is now occupying the U.S., and you’ll play as a fighter in what appears to be a resistance group, trying to survive and hopefully free the country in the process.

The game is set in residential America. It kicks off one clear morning in a small Colorado town, where you, a survivor with a past, wakes up. Houses are abandoned and run down in a sort of makeshift camp, and you find that a group of traveling Americans are taking shelter there, doing their best to gather food and prepare to move to another camp.

Just as soon as you are handed a weapon, some slightly futuristic military tech, your camp is attacked, forcing you into action. What followed was impressive to both our ears and eyes: as explosions from Korean vehicles slid into and past the player, the floor rattled with low drones from THQ’s subwoofer rig.

The overall look is very cinematic. We were told that their Drama Engine tracks players dynamically and has the action following them, immersing them in a world that feels like a movie that you’re somehow starring in. For example, our hero picks up a RPG that fell out of a window after taking an enemy out. He fires it at an approaching Korean jeep headed his direction. The explosion has the jeep sliding directly at and past the player, with flames and surround effects that seem straight out of a war movie. Later, headed to a checkpoint, as you head up a staircase to a second floor of an abandoned house, another vehicle comes crashing through the wall. The action escalates to a climax as a plane flies overhead and fires what looks to be a rocket directly into the camp. Talk about over-the-top!

What we saw of Homefront looked fantastic, and the setting and backdrop Kaos has provided looks to be the most promising part. We were told that the action will extend to other American locales like suburbs, strip malls, and even the San Francisco bay. While we saw a single player prototype, multiplayer is on the way, and will support up to 32 players with vehicle and aircraft combat.

It’s still a bit early to make any solid calls, but I can definitely say that Homefront is something to look forward to, even if it is an entry into an already crowded space.