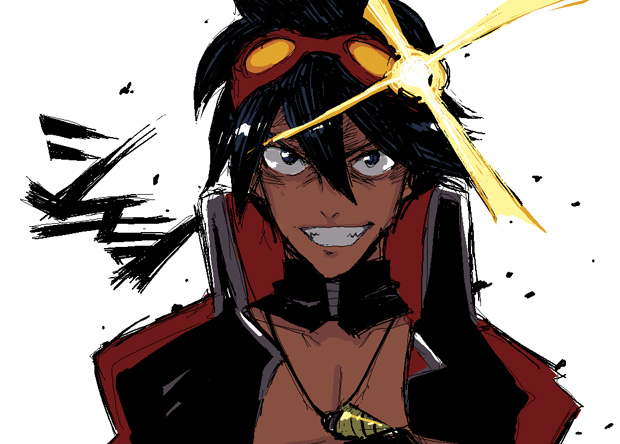 Yesterday, during Sony’s press conference, they mentioned a whole host of new content joining the PlayStation Network. Now, knowing me, I’m taking a moment to highlight some of the content that is near and dear to my heart. Amongst the wide number of logos that Sony threw up on the screen were ADV’s The Anime Network, Viz Media, and Starz’s Manga Entertainment. They’ll be joining FUNimation and others on the PSN with some great titles.

Like? Well, apparently Starz is handling the distribution of Gurren Lagann, one of those series that will inspire you to do great things. Similarly, other titles like Ghost in the SHell and Robotech will be distributed on the PSN. Viz will likely distribute episodes of stalwart shonen titles Bleach and Naruto, while ADV will bring plenty of its VOD service to the PSN.

LOS ANGELES, June 2 /PRNewswire/ — (E3 Expo) — Starz Digital Media, an operating division of Starz Media, and Sony Computer Entertainment America (SCEA) announced today at the E3 Expo the launch of a wide collection of new movie and video content on PlayStation®Network, which is accessible for download via PLAYSTATION®3 (PS3™) and PSP® (PlayStation®Portable) systems in the United States. The multi-faceted content distribution agreement widely expands the depth and breadth of movie, television, and popular video content for both electronic purchase and video-on-demand rentals for PlayStation® users.

Hit movies from Overture Films, including Righteous Kill (Robert De Niro, Al Pacino), and Traitor (Don Cheadle) will be available along with other films from Starz Media, including Anchor Bay Entertainment’s Lower Learning (Eva Longoria Parker, Jason Biggs, Rob Corddry) and the cult classic Phantasm. Manga Entertainment’s Dead Space: Downfall will be available from Starz Media’s deep feature and animated film library. Each movie will be typically offered for rental or purchase in standard definition (SD) and an additional High Definition (HD) option will be offered when available.

Starz Originals from the flagship Starz premium pay TV channel (“Head Case” and “Martin Lawrence Presents 1st Amendment Stand-up”) will be available for electronic sell through (EST) in SD, with more coming soon. Also included is television programming from Starz Media, including “Painkiller Jane,” “The Descendants of Darkness,” and “Tripping the Rift.”

A wide selection of Starz Media’s popular Manga Entertainment for anime lovers everywhere will also populate the rental and purchase offerings, including movie and TV series from “Ghost in the Shell,” “Street Fighter,” classic episodes from series such as “Robotech” and new releases including “Gurren Lagann.”

“PlayStation users alike can now enjoy an even wider range of popular long-form and short-form content for purchase and rental,” said Mara Winokur, Starz Media’s vice president, digital media and business development. Winokur, who brokered the deal for Starz Digital Media, noted, “We are delighted to enter into this agreement with this bold, visionary company that is redefining the face of gaming and mobile platforms.”

The Starz agreement expands the PlayStation Network video delivery service now to nearly 1,900 movies and 9,400 TV episodes, many available in both SD and HD, making the PS3 system the ultimate entertainment platform, and the PSP system a leader in portable entertainment. Additionally, PlayStation Network offers movies in HD from all major motion picture studios and gives PS3 users the largest selection of movies on any gaming platform.