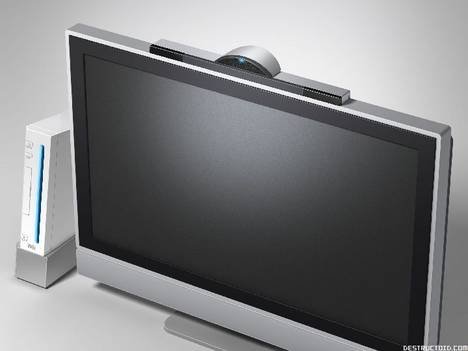 Taking a different approach to the voice chat solution for the Wii, Nintendo announced the WiiSpeak peripheral that will ship along with the forthcoming Animal Crossing: City Folk this holiday.

The small microphone that sits on top of the Wii sensor bar will pick up anyone’s voice in the room, relaying the audio through your television’s speakers. This, according to Nintendo, is to encourage a more inclusive experience. Whether or not that will be the case — or if it’ll just be a general annoyance to everyone in your household — remains to be seen.

I had a chance to test out WiiSpeak with Nintendo’s Charles Martinet (acting as Mario). I sat in a small area with a Nintendo rep who played Animal Crossing while I asked Martinet  (or Mario, if you’re into make-believe) questions about various fish he had caught, or if he had gotten rowdy at any industry parties the night before.

Between Mario, the PR rep, and myself, we had a pretty nice three-way conversation going on. I was able to hear Martinet clearly through the television’s speakers, and as far as I was able to tell, he was clearly understanding me, even though I was a good five or six feet away from the WiiSpeak. While I’m not entirely sold on the method, it’s good to know that the hardware seems to work as well (if not better) than you’d expect.