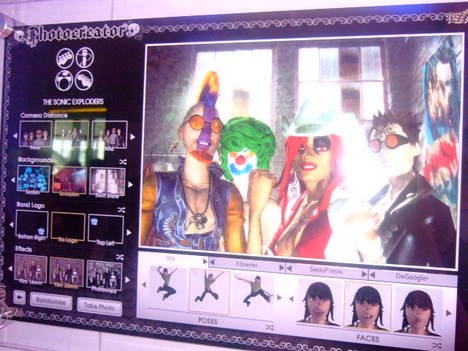 Before I go any further, know that I have played Rock Band 2 and it is — as expected — the sequel to Rock Band. That is to say that as an unashamed Rock Band fanboy (I play once a day, minimum), I wouldn’t have taken much (although there is, indeed, much).

But I’m not here to talk about the game (that’ll come later). As I’ve already admitted to being a snorting, mouth-breathing Rock Band nerd, I geeked out equally over some of the personalized Rock Band merchandise Harmonix are going to allow players to spend their cash on.

For instance, bringing your rocker avatar to life as detailed statue; yes, that’s happening. Or putting your Rock Band band on a t-shirt. Yup, that’s happening, too. In fact, Harmonix is going to allow you to pose your avatars for virtual photo shoots for even further merchandise customization. No word on pricing, but considering the mostly generous and reasonable downloadable content pricing, it’s likely you won’t have to break open that large piggy bank for the merch.

Sound ridiculous? Hey, it kind of is. But there’s a market for this stuff, evidenced by the fact that my wife and I have already begun to discuss our band’s (Unicorn Death Foetus) t-shirt debut. Next: I write Harmonix a blank check.

Admittedly, I may be a sucker — but I can’t be the only one who’s willing to pay for this stuff, can I?