I should probably just get it out of the way right now and say that my family, friends, and I play the original Rock Band quite a bit. I’m talking somewhere in the range of “all of the damned time” and “seven days a week.” So considering that the sequel — cleverly called Rock Band 2 — doesn’t stray from the formula too much, it’s no surprise that I was completely enamored with the idea from the jump off.

The gist: more songs, fully compatible with all of the downloadable content I’ve been dumping my God damned money into weekly since the game’s launch last November, and improvements to already established game modes. So … who do I write the check out to?

With that in mind, the following preview of the sequel may contain hints of giddy fanboy glee, and I’m unapologetic about that fact. The bottom line is that if you didn’t like playing the original Rock Band, there’s nothing to see here and you might want to move along. But if you were a fan with realistic expectations for what developer Harmonix could improve, Rock Band 2 is the game for you.

Harmonix even have a few pleasantly surprisingly tricks up their sleeves, too. 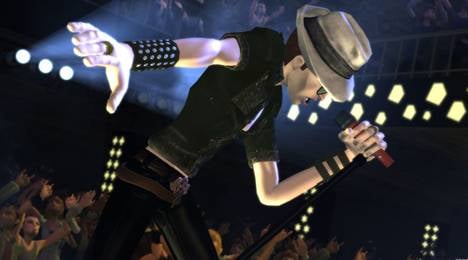 As I’ve already said, the core of the game is identical to what was delivered in the original game. The already established guitar, bass, drums, and vocal formula remains the same; in fact, playing the game, I only a few subtle and not necessarily notable differences in visuals. Harmonix didn’t mention any new additions to the core gameplay, and if they’re there I didn’t notice them, either.

I did notice that Rock Band 2 is going to feature an intimidating and long set list available for rocking out to. The game itself will ship with 84 tracks on the disc itself, all master tracks, including songs by AC/DC, System of a Down, Bob Dylan, The Who, Alanis Morisette, and more. The game will even feature a new Guns N’ Roses song, taken from their forthcoming album — the Duke Nukem Forever of the music industry — Chinese Democracy. Harmonix are also promising to make 20 more free songs available for download soon after the game’s release.

So that’s 104 songs right there, which is ridiculous in and of itself. But also consider that the game will support all of the downloadable content currently available for the original Rock Band, and that weekly DLC will continued to be delivered. Additionally, Harmonix is promising that most of the tracks on the original Rock Band disc can be exported to your PlayStation 3 or Xbox 360 hard drive (with an Internet connection for a “less than $5” licensing fee) and can be played in the new title. 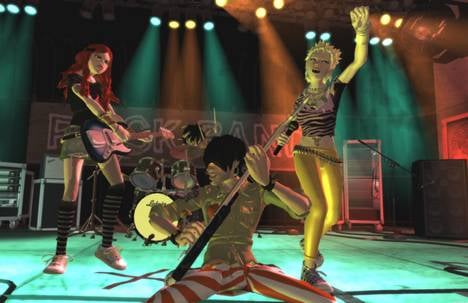 The promise is that by year’s end nearly 500 tracks will be playable in Rock Band 2. Five-hundred songs is an absurd number. Activision and Neversoft have already shown a pretty strong list of heavy-hitters for their competing title, Guitar Hero: World Tour, but have yet to deliver a solid list or actual number. Harmonix has laid all of its cards on the table, providing a full track list from their new game, and already proving they can DLC with reliable regularity. A music game lives or dies by its soundtrack, and with close to 500 songs, if you can’t find something you like you should have your ears removed.

The first game’s Band World Tour mode makes a return in Rock Band 2, this time with some much needed changes and tweaks. For one, the mode can be played entirely online, so stop bitching about not being able to. Additionally, there are no more “band leaders,” which means members can be swapped freely in and out of any given band (just like real life!). It will also possible to switch up instruments throughout world tour, which means characters aren’t tied to a specific role like they were in the first game. World Tour Mode features the obvious addition of new gigs, challenges, cities, and the ability to hire staff (although no solid details were given).

Harmonix have also included some new online challenges for your band in the form of Battle of the Band challenges, which pits your band against everyone else participating on Xbox LIVE or PSN. Challenges will be added daily, and can be simply score-based or song-specific streak battles (one we were shown during the E3 demo was a “Ace of Spades Guitar Streak Battle,” for instance). While they’re active, these challenges can be played multiple times in topple a top band or maintain your position. While playing a challenge, a real-time meter (similar to that seen in the first game’s Tug of War battles) will appear on screen to track your progress. 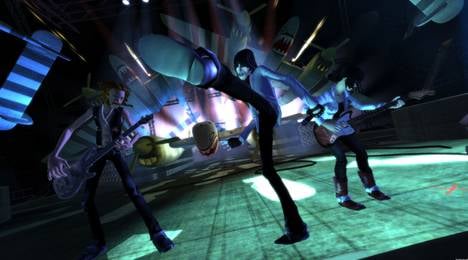 Your position in a challenge can be compared on a leaderboard to everyone online, or simply those of your friend’s band. It will even be possible to receive an alert via text message or email when your top score is beaten. If you think that’s ridiculous, why don’t you go back and read the part where I wrote that new challenges will be added daily. Not once a week. Not once a month. Every. Day. My wife put it best: “We will never leave the house.”

But hey, when we do leave the house, it’s usually to play Rock Band somewhere else with other people, anyhow. Which brings me to the subject of the game’s new and improvement quickplay, song management, and menu system. Yes, it looks almost identical to the current game’s Rock Band Store, offering up difficulty information for each instrument, album art work, and allowing you to quickly jump to any given letter.

Additionally, depending on how you sort your list, you’ll see headers that can be select for quickplay. You can quicklyplay all of the songs in a given group by selecting the header, like an entire album beginning to end, for example. There’s also the ability to create a set list that will play from beginning to end with no backing out to menus; no specifics were given as to how many songs you’ll be able to add to a list, but the number 60 was mentioned. If you’re playing more than that in one sitting, you’re frightening me.

Harmonix talked about, but didn’t show us, the game’s much-talked-about Drum Trainer. Exactly what it sounds like, the Drum Trainer is designed to gamers a better vocabulary behind the kit, teaching fills, and basic beats without the help of on-screen gems. Harmonix were finding that some of the best Rock Band drummers were simply following notes on the screen, and are hoping to give them a better understanding of how to build basic beats and fills outside of the game. The drum trainer will also feature a “free play” mode with a number of different kits for free form jamming and optimal “neighbor bothering.” 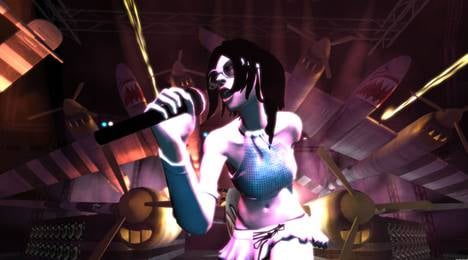 Yes, Rock Band 2 is most definitely the sequel to Rock Band. With that in mind, it’s still obvious that Harmonix have added a number of features that really up the value of the overall experience. All of the new features taken individually may not seem like much, but the overall picture is looking like a pretty impressive follow up to an already great title.

September will see a “timed exclusive” Xbox 360 release of Rock Band 2, with PlayStation 3, Wii and PlayStation 2 versions following this holiday.