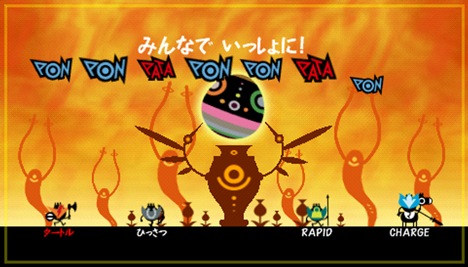 My heart told me a few days ago that we would see this title on North American shores. It looks like the shriveled, old black thing was right. At the Sony press conference, there was a slight mention of Patapon 2 accompanied by a tiny trailer. Fortunately, Sony has gifted us with some new screens that detail both the multiplayer mode and the normal campaign.

As you can see below, there are several screens highlighting a few gameplay elements. Patapon 2 looks to be much the same game, which is just fine with this editor. The new twist is the four-player co-op that we learned about earlier from the Weekly Famitsu. The goal of the ad-hoc multiplayer is for players to carry a massive egg filled with some kind of goodie across a level in order to hatch it. Thankfully, it won’t be as easy as it sounds. Monsters will be attempting to crack the egg while you and your partners are grooving to the music. There was also mention of “Hero” Patapon a few days back in an article from 1Up. Apparently these bigger and stronger Patapon will become the featured troop of the multiplayer mode to avoid confusion.

Although we can take the inclusion of Patapon 2 stuff at E3 as confirmation of a NA release, we still have no clue when it may hit. The Japanese release date is winter of this year. There’s still a possibility that someone will run into it on the show floor, so stay tuned and check out the screens in the meantime.