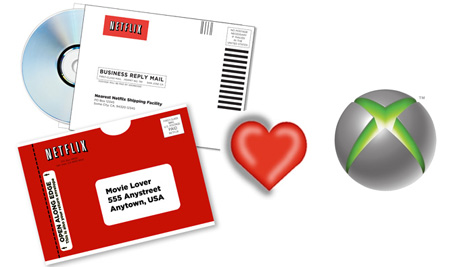 In an effort to further expand the Xbox 360’s multimedia capabilities, Microsoft has teamed up with Netflix to offer more than 10,000 movies and TV episodes that can be streamed directly to your console through Xbox LIVE.

As revealed during Microsoft’s E3 08 press conference, anyone who has both an Xbox LIVE Gold account and a Netflix membership will be able to take advantage of this offer at no extra cost.

If you meet the necessary membership qualifications, starting this Fall, you’ll be able to add movies and TV episodes to your instant queue on Netflix’s Web site, and then see that same content displayed on the TV to which your Xbox 360 is connected to.

All in all, it’s a pretty sweet deal if you’re already paying for LIVE and Netflix, and aren’t currently using a media center PC and your 360 as a media extender to basically do the exact same thing.

Full press release after the break.

Microsoft and Netflix Unveil Partnership to Instantly Stream Movies and TV Episodes to the TV via Xbox LIVE
For Release Noon PDT
July 14, 2008

Microsoft and Netflix Unveil Partnership to Instantly Stream Movies and TV Episodes to the TV via Xbox LIVE Exclusive agreement creates game-changing home entertainment experience; more than 10,000 movies and TV episodes will be available to watch instantly at no additional cost to paying subscribers.

LOS ANGELES — July 14, 2008 — An exciting new home theater experience is coming to living rooms this holiday season. At the E3 Media and Business Summit, Microsoft Corp. (Nasdaq “MSFT”) and Netflix, Inc. (Nasdaq: NFLX), the world’s largest online movie rental service, today unveiled an exclusive partnership to offer consumers the ability to instantly stream movies and TV episodes from Netflix to the television via the Xbox 360 video game and entertainment system. Xbox 360 will be the only game system that lets users instantly watch movies and TV episodes streamed from Netflix. This movie watching innovation will be available to Xbox LIVE Gold members who are also Netflix subscribers and will let those users enjoy streaming movies from Netflix on Xbox LIVE at no additional cost.

A growing library of more than 10,000 movies and TV episodes will be available from Netflix when it launches on Xbox LIVE in late fall, with more choices added over time. Through this agreement, along with the existing Xbox LIVE Marketplace Video Store, Xbox 360 will be home to more movies and TV shows on demand than any other device connected to the TV. Xbox LIVE quickly and easily connects consumers and their friends to the entertainment they want — with no PC required for viewing.

Netflix on Xbox 360 is an important component of the new Xbox experience, a new generation of games and entertainment experiences that will be available on Xbox 360 consoles this fall. The new Xbox experience, also announced today at the E3 Media and Business Summit, represents the first time in history that a mass-market consumer electronics device has been re-invented through free software, giving people more fun and intuitive ways to interact, play and enjoy entertainment content.

“Watching movies at home will never be the same. Netflix on Xbox 360 is an entertainment first, and we are bringing friends together with the best in entertainment content like no other device in the living room,” said John Schappert, corporate vice president of Interactive Entertainment LIVE, Software and Services Business at Microsoft. “We are creating a completely new social entertainment experience, and Xbox 360 will be the only video game system where you can access your library of instantly streamable movies from Netflix and turn any room into a virtual movie theater.”

From the Netflix Web site, members simply add movies and TV episodes to their individual instant Queues. Those choices will be automatically displayed on the TV screen via Xbox 360 and available to watch instantly. Once selected, movies will begin playing in as little as 30 seconds. In addition to instantly streaming movies to the TV, Xbox LIVE Gold members can fast-forward, pause and rewind, all using either their Xbox 360 Controller or Media Remote. In all, the user interface creates a highly personalized experience that puts viewers in control.

“Netflix and Xbox 360 are a perfect combination, the leading online movie rental service and the leading games and entertainment system joining forces to create an all-in-one entertainment experience with content for everyone,” said Reed Hastings, chairman and CEO of Netflix. “For Netflix, it represents an important step forward in making instantly streaming movies on the TV more broadly available to our members.”

The library of movies and TV episodes that will be available for instant streaming from Netflix via Xbox 360 includes scores of Academy Award winners and nominees, episodes from a number of popular, currently running and classic TV shows, and 24 of the movies rated by the American Film Institute as the greatest ever.