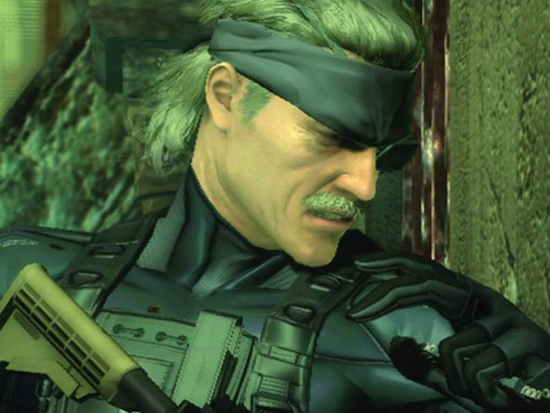 Cool fact of the day: I was in the first group to get some time with Metal Gear Solid 4: Guns of the Patriots this morning, the opening day of E for All. Even cooler fact: I am officially now the first person to ever play the English demo of the game in the world (well, besides the people that work for Konami, but … whatever).

The Konami guy (not his real name) who was running the presentation before the demo told us that we were the first group in the world to get hands-on time with this build of the demo. Of course, after hearing this, I immediately ran to a PS3 controller so I (and, in turn, Destructoid) could be the first person in the world to play it. Did I have to push an old lady down to accomplish this goal? Maybe. But was it worth it? Oh hell yes.

Being a huge fan of the Metal Gear Solid series (with Snake Eater being my surprise favorite) I was super excited to be able to try this demo out. True, it wasn’t a new demo (it was the same Middle Eastern level shown at TGS), but it was the first time I ever got to try it so … new to me!

But did it live up to all the hype and anticipation? Hit the jump for my hands-on impressions.

Once I hit the start button and heard the classic (extra loud) gun shot ring through the huge headphones over my ears I knew I was playing a Metal Gear Solid game. And I was very happy.

Going into the event, based on the screens and videos I had seen from this game, I was a little worried. Sure, Old Snake looked great (and, get this, it actually says “Old Snake” on the HUD above your energy), but something about the bland-looking environments and overwhelming new mechanics had me worried. Was the series changing too much and leaving its biggest fans behind?

Even though I only got about 20 minutes with the game, I can tell you that all my worries were unfounded.

First off, the in-game graphics blew me away. Seriously, you may have to see them up close to understand (screens or videos don’t do it justice), but the amount of detail and care in things like the lighting and texture work is staggering. All the fears I had about the boring environments didn’t even matter once I saw how gorgeous everything pieced together.

Even more exciting (and something I hadn’t heard at all until the Konami reps told me) is the news that this Metal Gear Solid will be taking place over numerous locations: from the everyone is familiar with, to , to even more exotic areas. That exciting revelation alone made my thirst for the final product grow exponentially.

Without getting into the boring details of what every button does and how it works, I will just say this: if you are familiar with the older Metal Gear Solid games, the control in this new iteration will feel mostly familiar, with some key changes.

In addition to things like crawling and pushing up against walls feeling more natural, a couple of new additions snuck into Metal Gear Solid 4 that are both exciting and fresh.

While the camouflage from Snake Eater returns, it is now executed so much better. Instead of having to go into a menu and figure out which camo works best, the new Octocon Camo (awesome name) just adjusts to whatever surface you happen to be leaning on. Pressed up against a brick wall? Well, expect your suit to quickly turn red, hiding you against the textured surface. The mechanic works very well and makes the stealth gameplay a lot more interesting.

The only thing I missed in the game was a decent radar system. True, this new display is so much more realistic (not showing you the “sight paths” of the enemies), but once a soldier sees you, trying to hide is a huge chore. And having only 20 minutes with the game, I was shooting a lot more enemies than I probably should have.

And speaking of shooting, this version of Metal Gear Solid focuses a lot more on combat (it has Guns in the title, for crying out loud). You still are urged to sneak as much as possible, but once the fireworks begin, Metal Gear Solid 4 almost feels like Gears of War at times. This is not a bad thing, but when up to ten enemies were swarming me at once, I just wanted to be able to hide under a cardboard box or crawl under a desk. Sadly, neither were options in the demo.

In the older Metal Gear Solid games, you would have a timer to tell you how long it would be until “alert” enemies would go back to minding their own business. This is not the case in Metal Gear Solid 4. The only way you know that it is safe is to listen to the enemies say things like “the intruder is gone, get back to your post” or “everything is all clear.” Does it work? Most definitely, yes. But does it really ramp up the challenge of the game to almost frustrating levels? Unfortunately, yeah. But, granted, I only had a short time with the demo, and we all know it takes hours to get comfortable with something as epic as a Metal Gear Solid game.

All in all, the English demo I played was endlessly satisfying. Of added note, all the voice work was fully lip-synched to the English dialogue. Expected, but very impressive nonetheless.

After talking with the representatives about the epic things to come later in the game (new locations, over-the-top boss fights, the return of old characters, etc.), I have no doubt that this will be one of the greatest Metal Gear Solid games ever and easily one of the best PlayStation 3 properties to date.

I can’t wait to play some more …