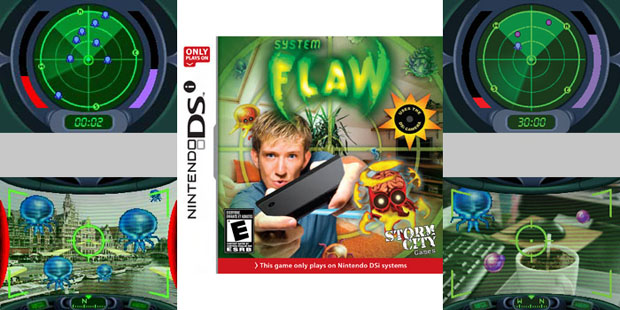 Oh, what to do with the camera on the outside of the DSi. Oh, I know, let’s make a shooter where you shoot things in the real world!

That’s the basic idea behind System Flaw, a DSi game from developer Storm City. Your real-world surroundings become the stage, and your DSi becomes the weapon. You’ll spin around IRL, in a full 360 degress, to shoot baddies that come flying at you on-screen. From your perspective as a gamer, it’ll look and feel really cool. From the onlooker’s perspective, you’ll look like a total idiot.

A press release tells us that there are over 100 levels that will have you “gyrating wildly” as baddies appear out of nowhere, right into your world.

I’m thinking that you could not play this on the can, as rear attacking enemies would have the temporary advantage.

System Flaw is set to release on October 27th.