Having spent Too Many Hours with Hyrule Warriors, I was worried I’d be tapped out for Omega Force’s next big spinoff, Dragon Quest Heroes. Well, maybe not worried. These games chip away at your life for months on end, and alluring as they are, I’d ideally rather split my time between a bunch of smaller, more fulfilling experiences than one huge, fun-but-eventually-repetitive game.

After playing a pair of levels at a pre-E3 event, I’ve realized there’s no escaping my fate. I’m in.

Here in the West, the game’s full title is Dragon Quest Heroes: The World Tree’s Woe and the Blight Below. I’m telling you that now because I can’t hold it in any longer.  So silly. But also fun to say out loud (in the privacy of your home where strangers can’t hear you being a weirdo).

The first level I tried was not the first level of the game, but it was straightforward enough: slay all of the monsters. They’re so darn cute! My history with Dragon Quest spans one title, Sentinels of the Starry Sky, so my connection to “iconic” series characters is tenuous at best. But I do love Akira Toriyama’s creature designs, and that’s a sufficient starting point for this game.

Coming off of Hyrule Warriors, combat in Dragon Quest Heroes feels slower, more deliberate. Strategic. You can swap between four party members at any time, each with their own HP, MP, spells, and abilities. Land enough hits, and you’ll fill a gauge that will put your hero into a souped-up state. In this lax early level, juggling characters effectively wasn’t crucial for success, but that was definitely the case for the session’s next stage, a battle against the towering Gigantes.

The idea is to hop into cannons and shoot the cyclops straight in the you-know-where to put it into a downed state, then mash away while it’s vulnerable. Don’t let it destroy everything. Easy.

But the beast had such an absurdly large pool of health that defeating it within the time limit seemed impossible. Matter of fact, after losing, I asked the Square Enix rep just to make sure. The fight was technically possible, he said. Guess I need to work on my strategy and timing. (Or grind?) Either way, the battle should be easier at home with the finished game. 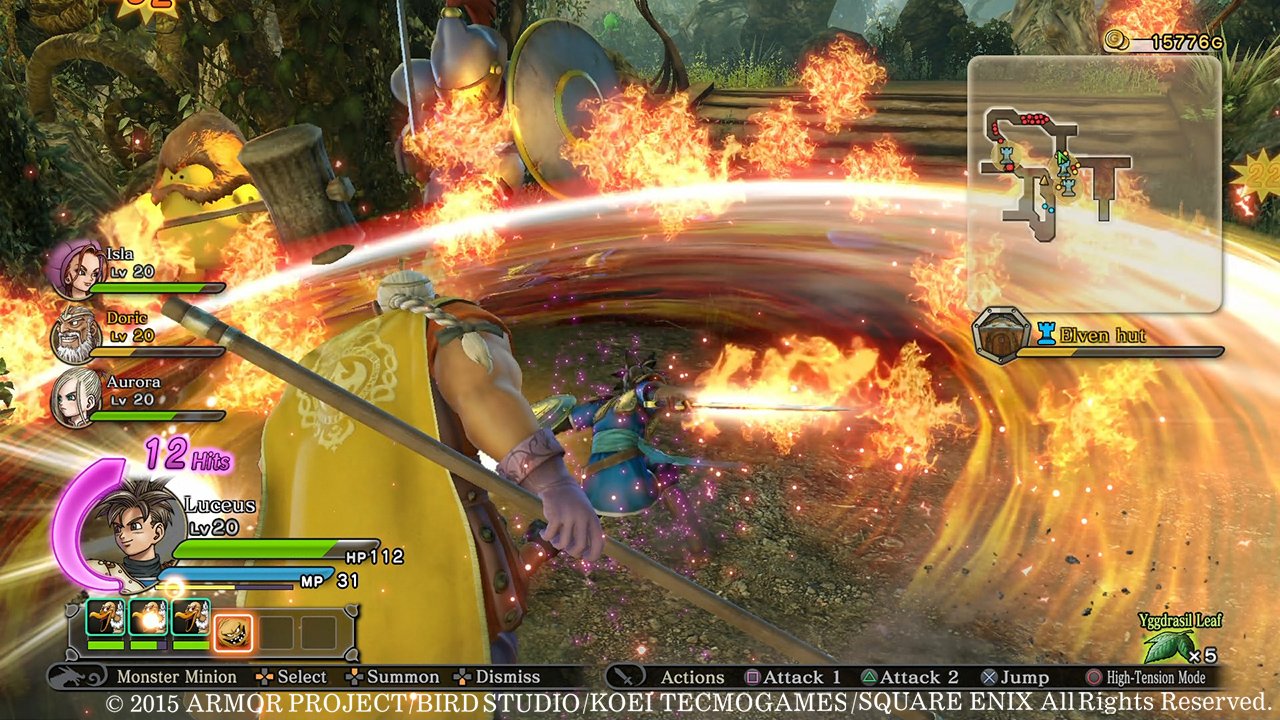 Much to my dismay, the demo ended right there. I didn’t get to see the town hub. Or character upgrades. Or the story. Or monster medals, which are dropped by fallen foes and can be used to summon them onto the battlefield to fight for your side. For the purposes of writing this preview, that lack of first-hand experience is unfortunate, but the tease has ratcheted up my interest  considerably. Dragon Quest Heroes is already out in Japan, so inquiring minds can see as much or as little footage as they want ahead of the October 13, 2015 release for PS4 in North America.

Between all the familiar music, sound effects, and faces, Dragon Quest fans are going to feel at home here. It was a warm, happy, inviting place, even for me. Combat flows more like a role-playing game and skirmishes feel smaller and simpler, but that’s not inherently bad. It’s just different. After a few hundred hours of Hyrule Warriors, yeah, I could go for something different.