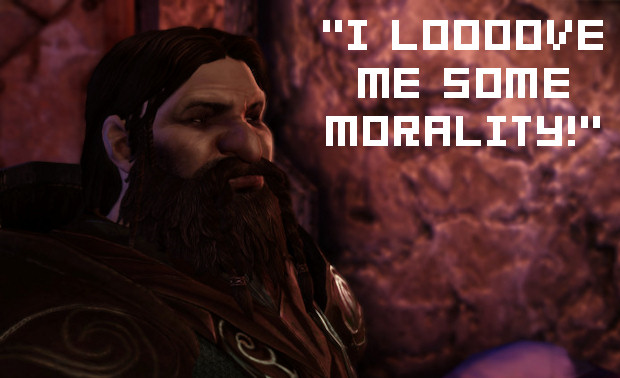 “Moral choice” is a term thrown around a lot by developers these days, promising a game that will give you dilemmas, make you think, and introduce shades of grey. Let’s face it, most of them fail and boil down to extreme black-and-white moralities that represent gameplay, not moral, choices. Dragon Age: Origins lead designer Mike Laidlaw believes Dragon Age is as close as you can get, with an “aggressively” moral grey area.

“We’re trying to be a lot more grey than that, aggressively,” he tells Destructoid. “Okay, the Blight is pretty much evil, it’s out to destroy everything in its path and really there’s not a whole lot of redeeming qualities to that as an agenda.

“But at the same time you have characters that have their own motivations, opportunities for you to be opportunistic, and maybe do something that’s inherently evil but at the same time, a part of being a Grey Warden and carrying the fate of the world on your shoulders, maybe it’s what you think you have to do. It’s a choice you have to make.

“We’re also trying to give you, I guess, a sense that the villains, the characters you’re interacting with, they have real motivations for why they’ve done what they’ve done. So while it’s very easy at first to go ‘well clearly he’s the bad guy,’ as soon as you dig in deeper and the game certainly encourages you to do this, you tend to find there’s more going on than just the surface.”

The best villain is the one that thinks he’s right, and I’m glad that’s something BioWare understands. As for just how black-and-white Dragon Age turns out to be, we shall see. What I’ve seen of the game so far leads me to believe that, while the game still has a clear-cut good and evil, it’ll be the closest to the Holy Grail of Morality that developers have ever gotten.