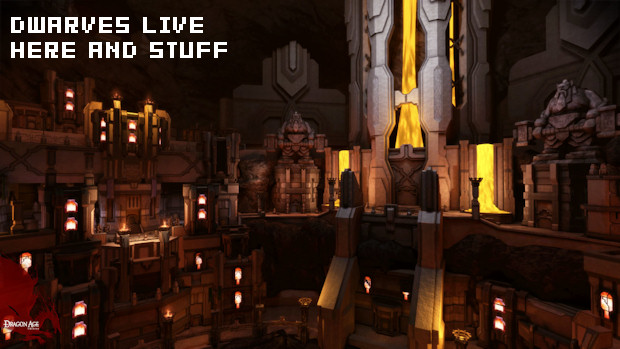 As far as fantasy races go, I’ve never liked dwarves. It’s not that I’m prejudiced or anything, I just find them more boring than your other fantasy stereotypes. I’ve always been one for the undead myself, but that’s mainly because I grew up obsessed with the skeleton fight scene in Jason and the Argonauts, and now believe that anything involving skeletons is awesome.

None of that was really very relevant, so let me just inform you that BioWare has squirted us in the face with what it calls the “weekly blast” of Dragon Age: Origins content. This week’s blast is all about the underground city of the Dwarves, Orzammar. If you’re a fan of the stunted ones, then this will be the place for you.

Dragon Age: Origins is the first BioWare game that I’ve been truly excited for, and hopefully that anticipation pays off. It’s looking like a really promising RPG, and I hope to get my hands on it soon. Meanwhile, check out the gallery for pictures of Orzammar in all its splendid subterreanean glory.