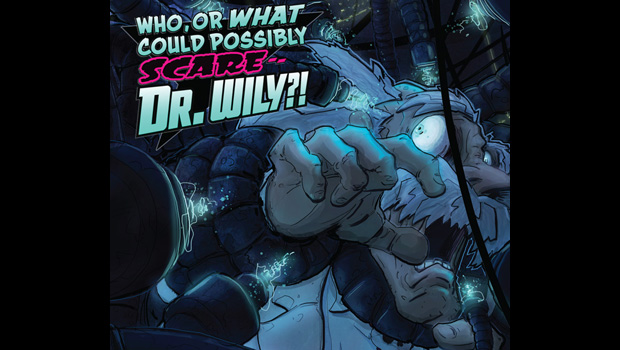 We now return to our regularly scheduled programming

It’s over! It’s all over! It’s all… PSYCHE! You think I’d stop covering the Mega Man comics just because the crossover is finished? Who do you think I am?

Though the evens of “Worlds Collide” are technically canon to the main story, the effect of Eggman and Wily’s Genesis Wave is that everyone’s minds have been wiped of the whole ordeal (oh great and powerful deus ex machina!). After some momentary disorientation, Mega Man realizes he’s right where he left off in Mega Man #23: locked in battle with Break Man, the secret identity of his brother, Blues.

Meanwhile, Dr. Wily attempts to use the alien supercomputer Ra Moon to launch his latest scheme, but to his horror, Ra Moon reveals that it was he who had been manipulating Wily since the beginning. In an instant, Ra Moon takes control, officially kicking off the adaptation of the Japan-only game Super Adventure Rockman.

As usual, I’ve got preview pages below, but this time I also included the solicitation with Archie’s official summary and release info.

“THE RETURN”: Mega Man is BACK! After wrapping up a history-making adventure with his pal Sonic the Hedgehog, Mega Man has returned to all new danger and excitement in Mega-City! Meanwhile, Dr. Wily has sixteen Robot Masters under his command, not to mention the mysterious Break Man—so what has got the evil doctor so terrified? Find out as the full might of the ancient alien RA MOON is unleashed upon an unsuspecting world! The prelude to the next Mega Man epic “BLACKOUT-THE CURSE OF RA MOON” starts here with an ending that will leave you breathless! Featuring an up-close-and-personal variant cover by artist Tristan Jones!