[A long time ago, we had a community blog string together some theories on the frightening darkness allegedly lurking underneath Princess Peach’s facade. Now, Thumb Scar digs deeper for the origins of Donkey Kong Country, which has a surprising amount of clues to infer from. Want to see your own material on the front page in a slow but sure fashion? Start a blog today! ~Strider]

The following is an excerpt from one of the oldest pieces of ethnographic literary evidence concerning the beginning of the era of Donkey Kong Country. Referred to in the vernacular as simply, the instruction booklet.

“Storms lashed the rugged terrain of Donkey Kong Island, home of the famous video game ape and his family and friends. Near Donkey Kong’s tree house, a small monkey named Diddy cowered in fear of the savage lightning which periodically illuminated the lush, dark jungle that covered most of the island. Donkey King had assigned Diddy to guard duty on this awful night, and he was not happy about his fate.

Donkey Kong’s earlier pep talk kept creeping back into Diddy’s mind. “OK, little buddy,” Donkey had said in his patronizing voice. “As part of your hero training, you’ve got to stand guard tonight over my bananas… I’ll relieve you at midnight, so try and stay awake until then!”

Buddy? Yeah, right. Now he was alone. Alone unless you counted the unknown threats which lurked behind every tree that he glimpsed during the lightning flashes. The Kremlings were out there, this much was certain. They coveted Donkey Kong’s banana stockpile, the largest on the island, and probably in the world. A treasure in potassium and Vitamin A. The perfect food. “Ahhh… delicious bananas…” The thought of DK’s golden horde almost made Diddy forget his uncomfortable situation. But a rustling in the undergrowth and the sound of several snapping twigs brought him out of his reverie.

“W-w-who goes there?!” Diddy challenged the sounds in the darkened, dripping foliage. There was no answer but the flashing of claws and teeth, followed by a fleeting vision of many reptilian eyes and a crack of thunder. Diddy somersaulted into the fray with his signature cartwheel attack, but he was quickly overcome by the weight of many scaly assailants… 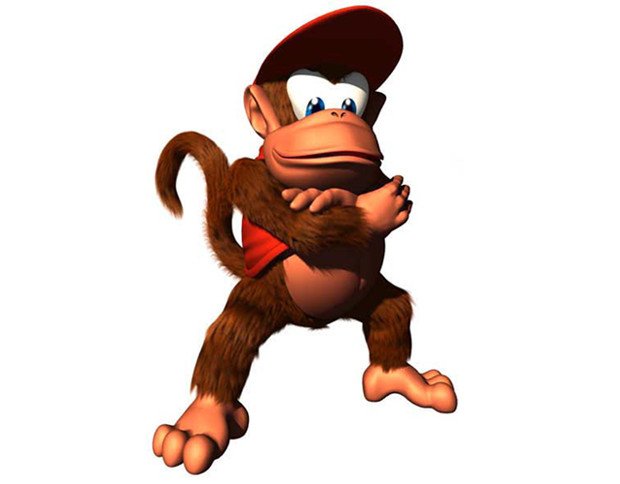 “… The entire Donkey Kong Clan was oblivious as the Kremlings then loaded the banana horde into their Kremling karts and wheeled them off through the jungle, leaving an obvious trail of dropped fruit form their overloaded conveyances.

“The next morning, Donkey Kong was awakened by frantic shouts of his name. “Keep it down!” he growled. He suddenly realized what time it was. “Morning already… I slept through my watch!” Falling out of bed and through his tree house door, Donkey King slid down the tree house ladder without using any of the rungs, and assumed his characteristic fighting pose, with sun-blinded, squinting eyes! One swift blow was all that was needed to leave him sprawled on the floor, face down! He groggily rolled over to see the familiar wrinkled, white-bearded, grouchy face of his old granddad, Cranky Kong, peering down at him. In his heyday, Cranky was the original Donkey King who battled Mario in several of his own games.

“What’cha do that for?!” Donkey King asked, knowing full well that Cranky was prone to cuffing him at every whim. “Take a look inside your banana cave. You’re in for a big surprise!” Cranky cackled. Donkey’s mind raced as he vaulted to the cave and peered inside. Instead of the dull golden glow of thousands of bananas, there were only a few discarded peels. These had been trampled into the dirt by hundreds of reptilian feet, judging from the many three-toed footprints that covered the damp cavern floor. But what about…

“Diddy’s gone, too!” Cranky laughed. “That’s what you get for shirking your responsibility, you good-for-nothing bum! In my days we would have been happy to stand guard in the rain, ’cause that might have meant having an extra frame of animation! Of course, having rain would have been impossible, given our pitiful processing power, but…”

“Donkey King was suddenly filled with conviction. “The Kremlings will pay!” he raged. “I’ll hunt them down through every corner of my island, until I have every last banana from my horde back!”

“Find your little buddy and retrieve a bunch of bananas?!” Cranky snorted. “What kind of game idea is that?! Where’s the screaming damsel in distress?” 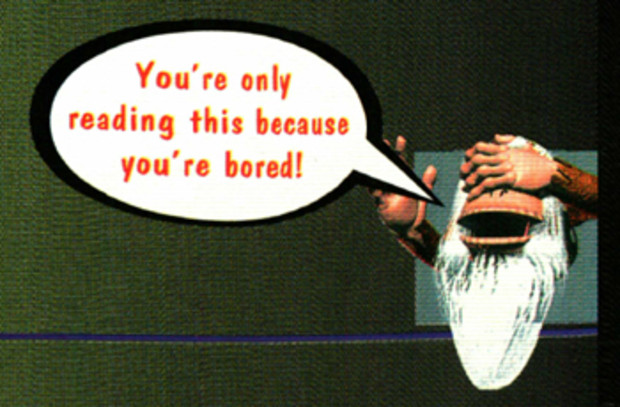 I submit to you, fine ladies and gentlemen, that this is not the whole story, not the whole narrative. As we have learned throughout the course of civilization, history is often written by the winners. And with that precedent, the true sequence and impact of historical events can be blurred and misrepresented. In what follows, I will attempt to deconstruct the geo-political situation on “Kong” Island in order to gain a further understanding of the social dynamics between the Kongs, the Kremlings, and the local fauna. Nay, to describe this critical turning point in Kong history. I suggest that Donkey Kong Country is not a tale of the wronged Kong Klan recovering its wealth but a mere episode in the protracted uphill struggle of the Kremlings against Kong initiated cultural relocation, centralized banking, and forced industrialization.

Geographically, this island host numerous environs: jungle, deep sea, snowy mountains, tree-top housing, caves, ruins, mines and a factory. All culminating in what could only be described as an island that celebrates the triumph that is Donkey Kong. At the beginning of this tale the Kongs are the sole owner of wealth on the island, living beach side in an exclusive community. 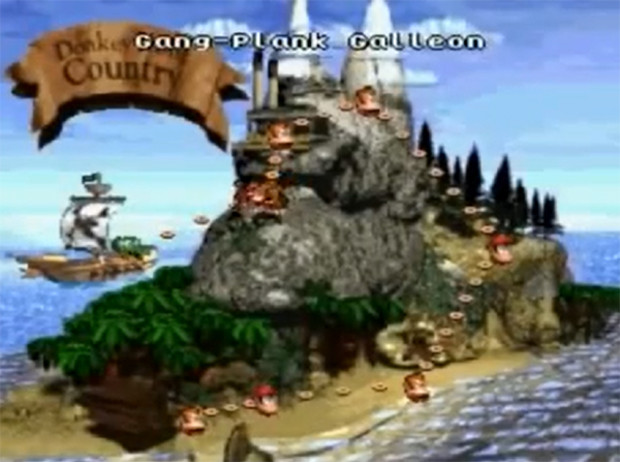 But with just that much information, we can already begin to understand the history of this island. The ruins hold gigantic stone temples with effigies of Kremlings, suggesting that their culture had been established here long ago. Currently, the Kremlins have invaded Kong Island after being away for some time, as is evident by their transportation (the pirate ship) and the lack of any lived-in permanent structures immediately prior to The Banana Heist of ’94. This suggests that a conflict and subsequent exodus of Kremlings from Kong Island happened at some point in the past, presumably between the treetop inhabiting Kongs and the Kremling temple builders. 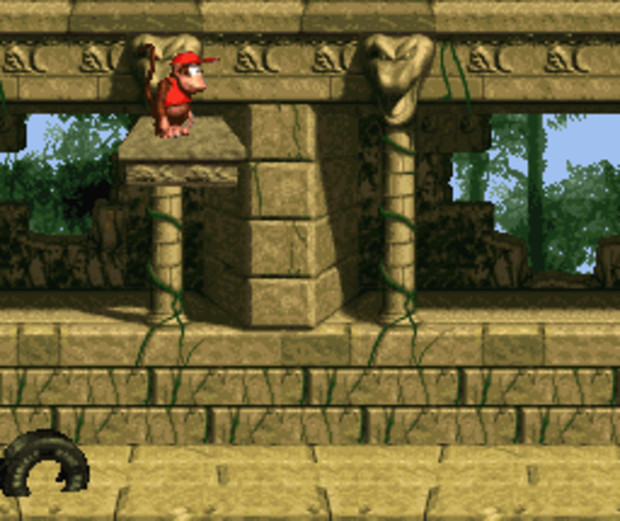 Since the great purge of Kremlings from what would be Kong Island henceforth, the island underwent developments. Most notable is the stone masonry of the island’s central mountain to resemble it’s overlord Kong, subsequently crowned with an industrial factory. The proximity of these two alterations to the landscape, coupled with the logical absence of the Kremlings in this time period, suggests that it was the Kongs that undertook the projects which resulted in the modern island. But developing an industrial scale factory and shaping the side of a mountain requires an enormous amount of manual labor and applied technology. Who were the phantom builders and tradesmen who undoubtedly spend years of their lives working for someone else’s goals? How did they learn how to do it? 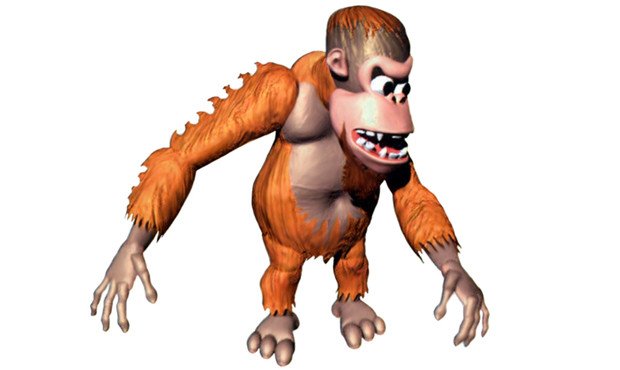 A quick survey of the local population allows us to narrow down our proletariat-in-question further. Excluding the Kremlings, the only sentient life found throughout Donkey Kong Country are Necky Vultures, Sloppa Snakes, Army Armadillos, Zinger Bees, and various aquatic life with one exception: the Mankey Kongs. Officially described in DK History as Kong reject orangutans, we not only find a probable candidate for a Kong working class, but a marginalized and taunted class as well. Where did the technology come from? Put plainly, the Kongs stole it from the Kremlings during the island purge. Given the artistic similarity of the stonework of the mountainside and the Kremlin temple effigies, it is likely they were done using the same method. 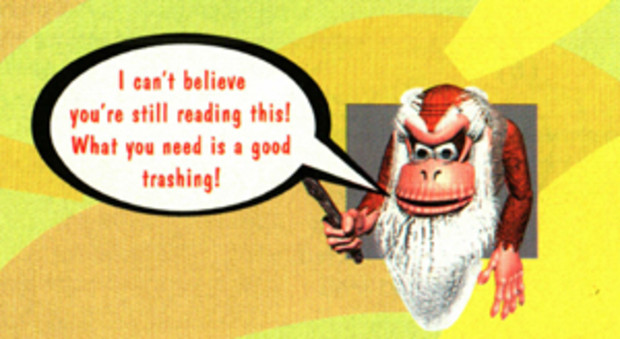 The Social Structure of Kong Island

These political and economic developments on Kong Island caused a stratification of social structures. The Mankey proletariat, numerous yet near identical, became subjugated by a Kong led oligarchy over time. Being the only available source of labor, the Kong elite paid the Mankey in bananas at first, but quickly turned the economic engine into a central-planned company town model. This relegated the Mankeys to the treetops while the bourgeoisie Kongs lounged in their tropical seaside huts. At some point during these developments, the Kongs seemed to have established a centralized banking ethic based on monopsony (where workers are only paid in company credits and only allowed to purchase at the company store, economically disempowering them). This would explain why the Golden Banana Horde is centrally located to Donkey Kongs abode, why Diddy would need to guard it, and why the Mankey Kongs have joined the Kremlings to fight against their elitist upper classes. 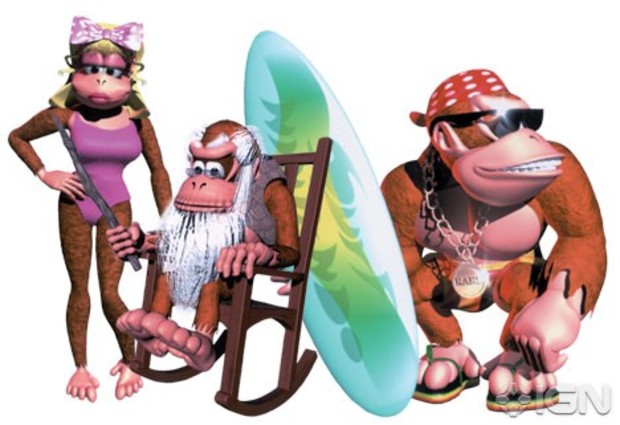 Due to the drastic centralization of power in the hands of a few Kongs, and their subsequent display of that force, the rest of the island’s inhabitants began biding their time. They waited until the long fabled Kremlings return home from their diaspora. Only then did the revolution begin. Only then did they storm the Bastille to take back that delicious potassium filled currency.

So to address Cranky Kong’s question, no, this is not a game about finding your buddy and a bunch of bananas. It’s a game about cultural and ethnic subjugation. When you support Donkey Kong, you support tyranny. You support the holding of absolute power, the hording of value based assets and the disenfranchisement of your fellow citizen. We no longer need to believe the lies of the Kong! Now we have a working outline of what really happened! And all it took was a little bit of research and a lot of imagination to come to the Truth. 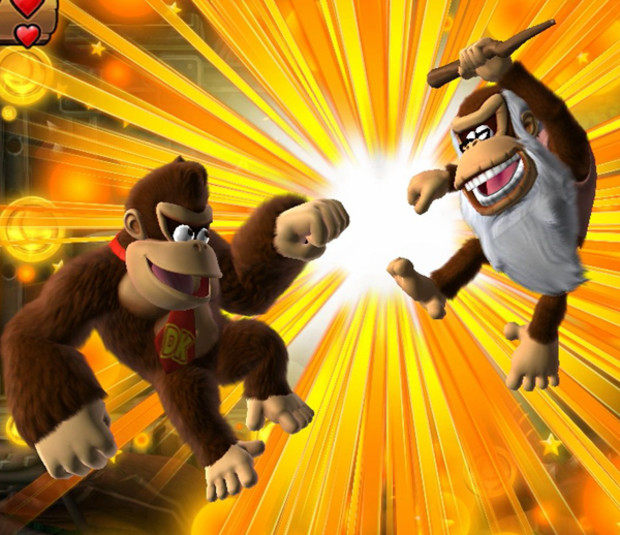 In the interest of transparency, this blog has been previously posted on another site approximately a year ago. I’ve been working on it a little since then and wanted to share it with you all. I hope you enjoyed this little satirical experiment.