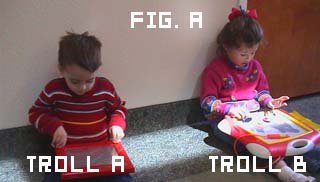 For the remainder of the Christmas break, my brother and I will engage in what is known  among developmental psychologists as parallel play. In my living room, there are two televisions — one of which has a PS2, the other an SNES. My brother and I will be playing Final Fantasy III and XII, respectively. (Final Fantasy  fanboyism is genetic). Obviously, our experiences are independent of each other. Furthermore, this is by no means the first time I’ve done this sort of thing — I’ve done it with a variety of friends.

What is parallel play? Why not just play alone? What does parallel play say about the social nature of video games? Is there a place in gaming for parallel play? I have no clue, but I’ll try to find out, after the jump.

Parallel play, in developmental terms, takes place at about two years old and is a stepping stone between individual and social play. For example, Troll A is playing with his Etch-A-Sketch and Troll B with her … thing (see fig. A). However, Troll A will never play with the thing, and Troll B will never lay her snot-soaked mits on the Etch-A-Sketch. Eventually, the two will learn to cooperate and discover new ways to achieve infantile nirvana. Parallel play is a method through which children build social ties — they’re not developed enough to engage in some sort of combined effort, but socialization via proximity and shared experience occurs anyway.

Adults also use parallel play, although to different ends.  I know people who congregate to do their taxes — the most evile of paperwerks — in an attempt to combat procrastination. The idea is that a support system will lessen the pain of giving all of your money away. Misery loves company and all that. College kids also do it with homework. The Kafka I’m reading isn’t helping you with your Newtonian physics, but that’s not the point. The point is that I took an opportunity to namedrop an author I’ve never read.

That’s all fine and dandy, but most of us are adults, or at least adolescents, and have progessed well into social play. Not just co-op or multiplayer, but massively multiplayer. Gaming is lightyears past parallel play, behaviorally speaking. Also, video games don’t suck nearly as bad as filing taxes or reading. So why do my friends and I, and presumably other gamers, feel compelled to parallel play?

Vicious Googling yields slim pickings, so I’ll have to go out on a limb. I think it boils down to good, old-fashioned companionship. Parallel play allows gamers to share their experiences with other gamers, even if the others aren’t necessarily involved. This shared experience is how friendships and relationships are built. Ultimately, it’s just like any “individual” sport. Is tennis really individual when there are 20 people on a court? Isn’t the track “team” a misnomer? Not really.

More importantly, can parallel play be made into a legitimate gaming mode? In face of single player, multiplayer, co-op, massively mutliplayer, and now crossplayer, is there an effective place for parallel players? 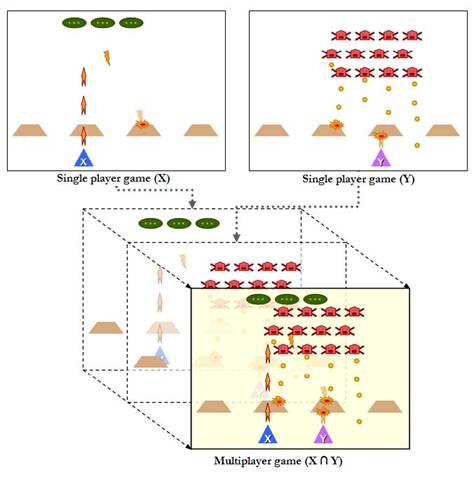 According to a Gamasutra feature, maybe. In it, Dimitris Grammenos explores the Theory of Parallel Game Universes, which, essentially, level the playing field to allow gamers with various disabilities (physical, mental, circumstancial, situational, etc.) to play side-by-side. The best example is a hypothetical shmup that would allow player 1 to kill only, say, blue enemies, whereas player 2 would kill green ones.  Players 1 and 2 are playing together, on the same screen, but their experiences are completely individualized.  In no way to the blue enemies affect player 2, and vice versa.

I think that this idea could be expanded into full-fledged games, allowing for parallel play without having to move TVs and consoles around to do it. Furthermore, the overlapping system that the Gamasutra describes isn’t necessarily the only means to achieve that end. Any number of split screen possibilities could provide parallel play — and it wouldn’t be any worse than any traditional multiplayer game. Imagine three of your friends all playing single-player Halo campagins on the same system, on the same TV screen.

This is, of course, all speculative and subject to the whims and desires of producers, developpers, and of course, consumers.  So, is there a market for parallel play? Is camaraderie something you all want during your game time, or are you more the semetic gamer?