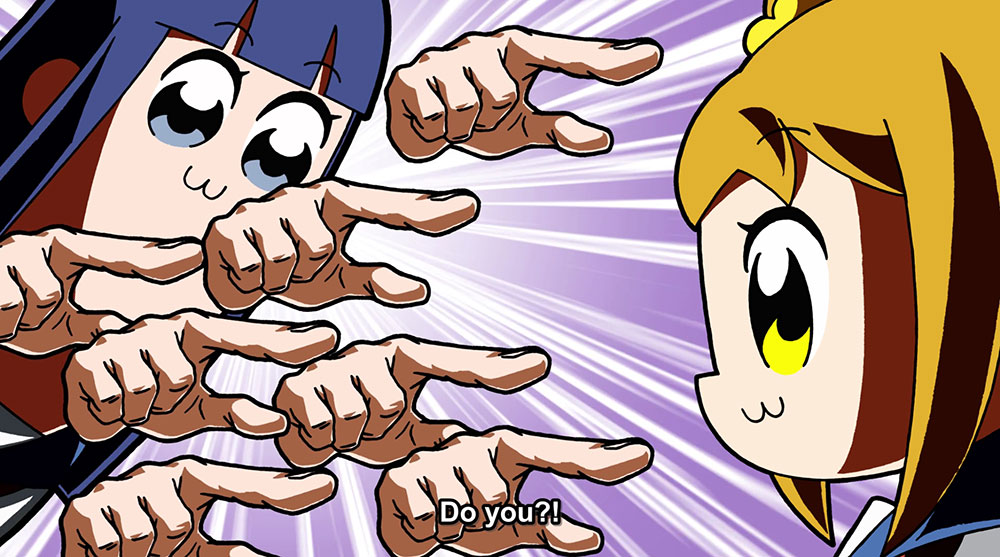 A week before Monster Hunter: World launches, I look back on my time with the series. The demo for 4U was amazing, to be sure, but what’s Monster Hunter without camaraderie? The hooks were in, but they wouldn’t be in deep and barbed if it weren’t for some friends, who noticed my shitposting about Monster Hunter on Facebook. So they invited me into their ragtag guild they called the Sunsnug Island Panapticon. 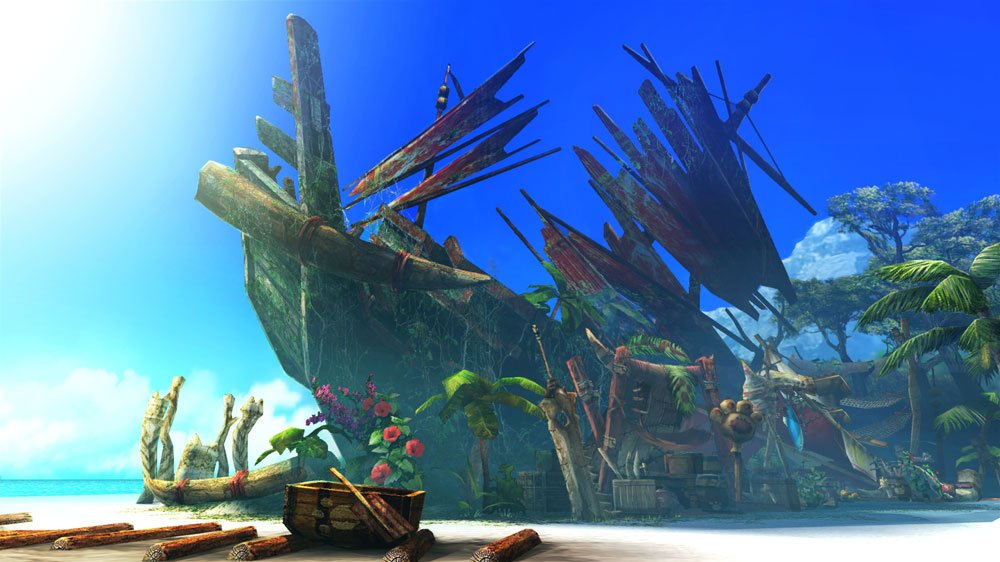 What’s a panapticon? Shut up, that’s what it is. But being a part of this group of friends taught me a lot about the finer things about the series, like prancing around like an idiot or running like a coward when Rajang is running wild. It’s chance meetings like this that allows humanity to truly explore the bounds of their taste and depravity. You know that disgusting anime you like? You probably got into it because of a friend, right? That’s right. I’m talking about Oreimo. I… [clenching fist]… can’t believe you’re into that.

With several betas going these past few months, someone’s probably getting into something new they never expected to get into. Hell, it’s a college old hat to get into a game because of classic dorm room game nights. So is there a game like that in your life, one that you never would’ve gotten into if it weren’t for some good willed friends?

Zalno specifies one game he got introduced to, but it sounds like Zalno’s friend saved gaming altogether for him:

My love of Pokemon (and games as a whole for that matter) can be attributed to a childhood friend of mine. I was introduced to it shortly after we met at a musical theater group. He brought over a bunch of his Pokemon figures and a VHS tape and I fell in love. Then he told me that all of this was based on a video game. Prior to this revelation, I was uninterested in video games thanks to a bad time with Super Mario Bros. on the NES. But after subsequent hangout sessions with him and our brothers, watching them play N64 games like Paper Mario, Super Smash Bros. and Pokemon Stadium, I was thoroughly convinced.

Eventually, I got a GBA and a copy of Pokemon Crystal. Every time I hung out with my friend from that point on, I’d bring it and my link cable so we could battle together and trade Pokemon. This gave way to playing several other games together for years to come. We did this until Diamond/Pearl, where we just kinda grew apart after a while. I was hoping we could battle online to make up for lost time, but that never came.

I’ll always treasure the times we spent enjoying Pokemon together.

Shoggoth2588 had a grand old time on PlayStation thanks to his buddies:

I never really got into online gaming like this but back when I was a kid it was because of my friends from school that I wound up getting things like the original Playstation (because Twisted Metal), Pokemon and, Voodoo Vince. That’s actually quite a long timeline isn’t it…? Those are the three that most stick out in my memory anyway.

NinjaSpped got to learn about Nintendo as a PlayStation 2 owner:

As a kid, I had a PlayStation 2 and one of my friends had a GameCube so I played Super Smash Bros at his house and discovered that series as well as other Nintendo properties like Metroid and F-Zero. 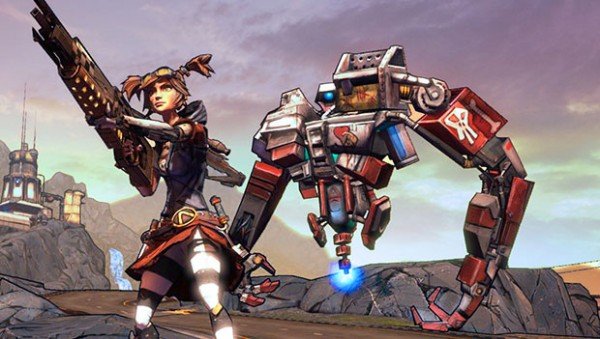 It’s all about the Mechromancer for GreenHornet214:

I had a roommate that got me really into Borderlands 2. He put a crazy number of hours into the first game.m and tried to get me into it. But it was a really ugly game. Once I learned about the Mechromancer in the sequel, I finally decided to give it a whirl with him. Played through a crapton of the game. All of the main game and most of the major expansions. Some sidequests, but definitely not all.

I kind of want to get it on PS4 and get my wife into it. She could play the Mechromancer.

For Jinx01, seeing is believing, thanks to a Facebook friend:

Hmm, it’s not multiplayer but a friend got me into Prey a few weeks ago! She was streaming it through Facebook. I’d kinda passed on the game, but when I saw it in action I decided I needed it. So glad I did, it was fantastic.

dephoenix admits he was kind of a shit until Viewtiful Joe got involved:

So when I was a kid I was a real little shit. I used to buy my friends games that I was on the fence about, basically letting them test them out for me. Most notably I did this with Sly Cooper and Viewtiful Joe. We both ended up enjoying those games so it all worked out.

Also had my oldest friend introduce me to Mega Man Legends, Uncharted, Star Fox Adventures, and lots of other games over the years. With Uncharted and Star Fox, it was mostly just watching him play them when I was over at his house. But Mega Man was another story. See, I have always woken up way ahead of my friend. And he was a bit selfish as a kid. He wouldn’t let me play certain games for the simple reason that they were HIS games. So I would wake up before him, and while he still slept, play those games. Especially Mega Man Legends. That ended when his older brother moved out for college, taking his PSOne and games with him. Several years later, after I got a PSOne of my own (my older brother gave me his when he got a PS2) I found a copy of Legends, nostalgia swept over me, and the rest is history. 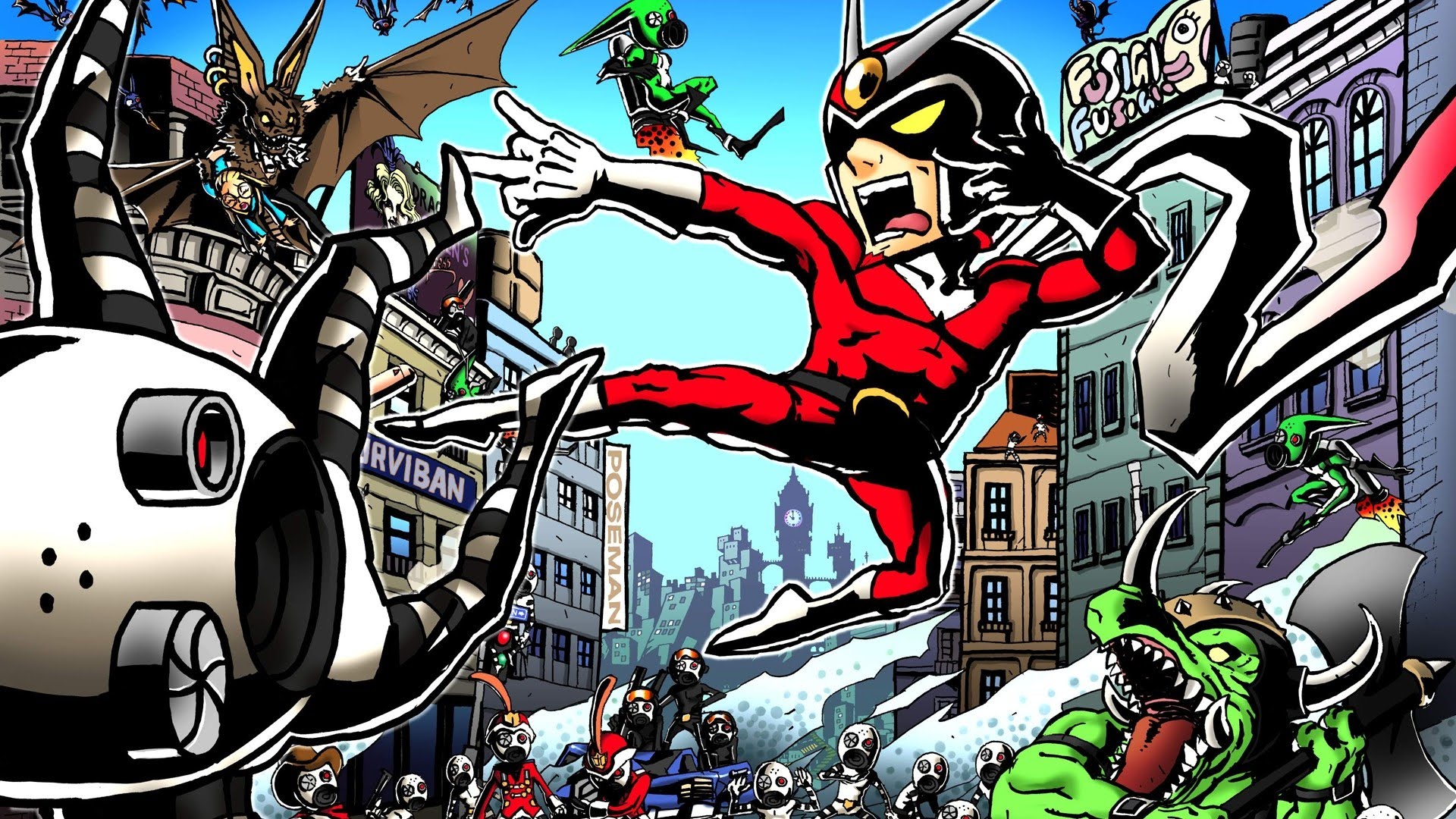 Appropriately, Monster Hunter Freedom. For whatever reason, my brother got hugely in to it, possibly because of one of his friends, don’t quite remember. I already had a PSP, but not MH. My first attempt to play it… did not go well. The very first ‘monster’ you fight – a Bullfango. A fucking Bullfango! – fucked me up every time. I did not want to continue.

He kept me going back to it, got me hooked, and I’ve played every subsequent entry besides Tri. I got my best friend in to it. Eventually, our much younger brother started playing it, and put us all to shame with how far he got and how damn good he was. And next Friday, I’m gonna fly to the city where they all live to play MH World together in person. Can’t wait!

Halo was another that was quite memorable, because our friend just had to show us some of the more entertaining cutscenes on Legendary, and that meant passing the controllers around as we failed many, many times to get through various levels. But it certainly got us well hooked on the series.

Back in the day, I used to buy almost any game the old PlayStation Friday Night Fights gang collectively decided would be added to the rotation. Mostly shooters but there were even some outside my wheelhouse like Street Fighter IV. Or someone would want to host an older game on a different night so I’d have to go hunt down a copy. I just had a bad case of FOMO and it cost me a lot of money! Was too much fun.

I guess most of the games I play now are still because of recommendations from Dtoiders so nothing’s really changed.

Seymour owes his obsession to a friend and a funky ass rhythm:

My friend Travis and I were playing some Left 4 Dead 2 back in early 2013, around the time Persona 4: Golden had released, and he was playing the game’s track “Like A Dream Come True” over his mic.

I asked “What the heck is that funky-ass rhythm?”

He says “It’s from Persona 4.” and that simple trade of pleasantries was what eventually blossomed into a frothy love of a franchise that has since become my most favorite.

From there, I tried Persona 4: Golden and loved every little last bit of it’s first couple hours (I wouldn’t beat it until around 2 years later). I then dived right into SMTIV and loved it as well! In that first year, I probably bought up every 3DS, Vita/PSP, and PSN SMT/Persona thing I possibly could. Now, I own every single one of the PS2 titles, probably a dozen or more of the soundtracks, 3 giant artbooks, and so on.

Thanks, my friend Travis. He is a good boy. 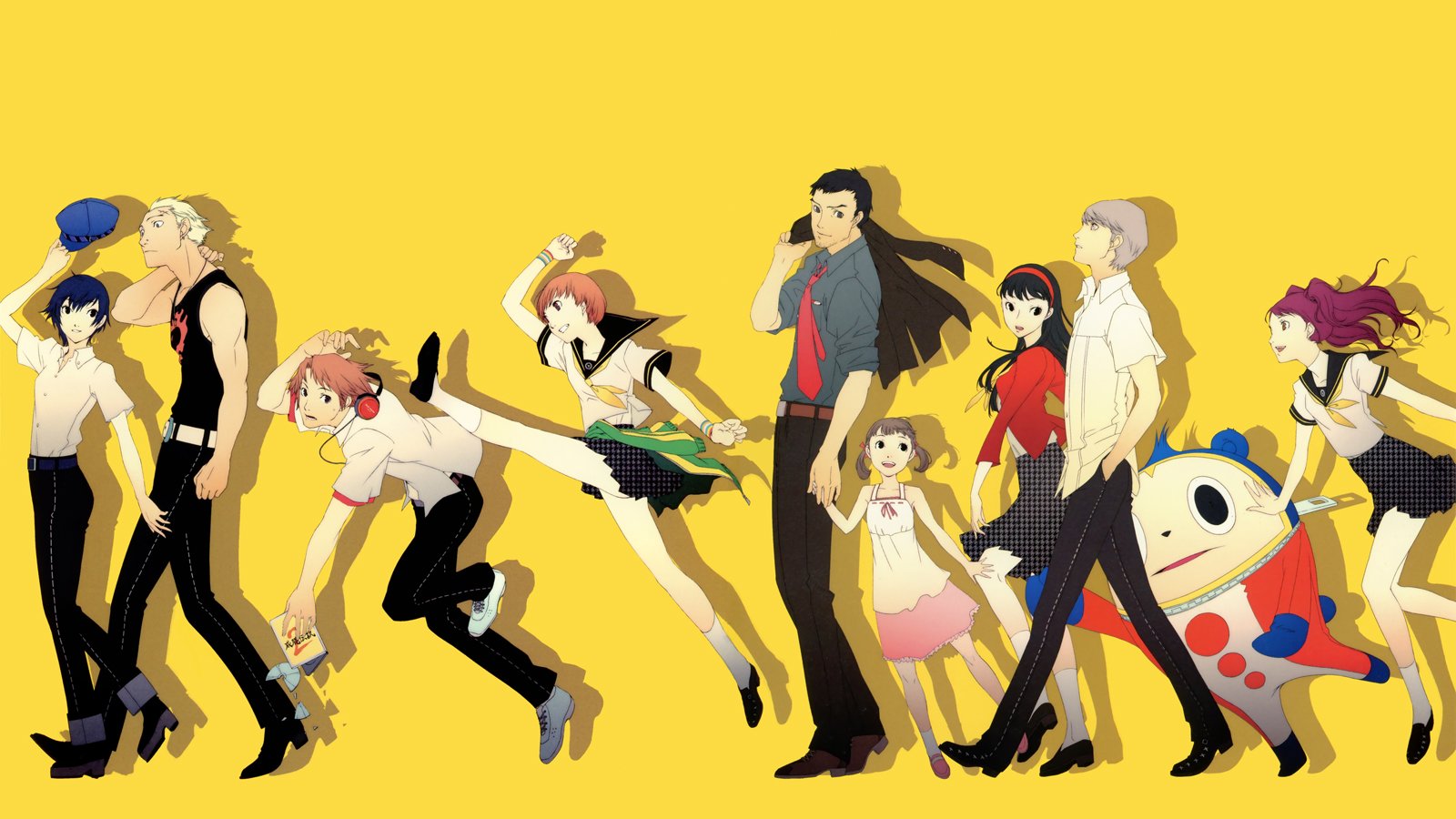 Cedi is thankful for a certain army jughead:

There was a friend who lived next door while I was in high school who was pretty much the only gamer I knew in person. We shared some of our favorite games, and he helped me get into weeb stuff and some fun flash games. Unfortunately, we fell out of contact when I moved away, and we haven’t stayed in touch since. I think he’s in the army now, so it’s not exactly easy to get a hold of him. Wish I could thank him properly for all the times we hung out, because he’s done a lot to help shape my current taste in games.

My cousin got me into Goldeneye and first person shooters in general……though that was mostly because he knew every map like the back of his hand, and as such was able to find the best places to hide and shoot me with the Golden Gun. Dick. I got the game shortly afterwards just so I could show him up, but by then he moved on and I was stuck being somewhat interested in shooting people in first person. So yeah.

LaTerry never died thanks to his brother:

My brother got me into the Souls games. I was intimidated by them because everyone said they were so hard, so I never gave them a try, but then my brother started a lets play of Bloodborne and I thought it looked so cool. I bought it and waffled around a bit, but didn’t make any progress before moving on to another game. Then when Dark Souls 3 came out my brother and I bought it at launch day and he let me summon him so that he could help me out. I finally caught my stride with the game and didn’t stop until I got the platinum.

Gamemaniac3434 is talking about me! Neat!

Actually, somewhat ironically, Monster Hunter World. I wasn’t interested before some buddies on this here dtoid convinced me that I should give it a try-you, lawman and limo helped push me into trying it actually strider-and I had enough of a blast with it that I decided I’m going to grab it and play it with you guttural swine. Playing and exploring, chasing down monsters and the organic stuff that happened during our fights convinced me to get into it and into my first Monster Hunter game. So thats nice. 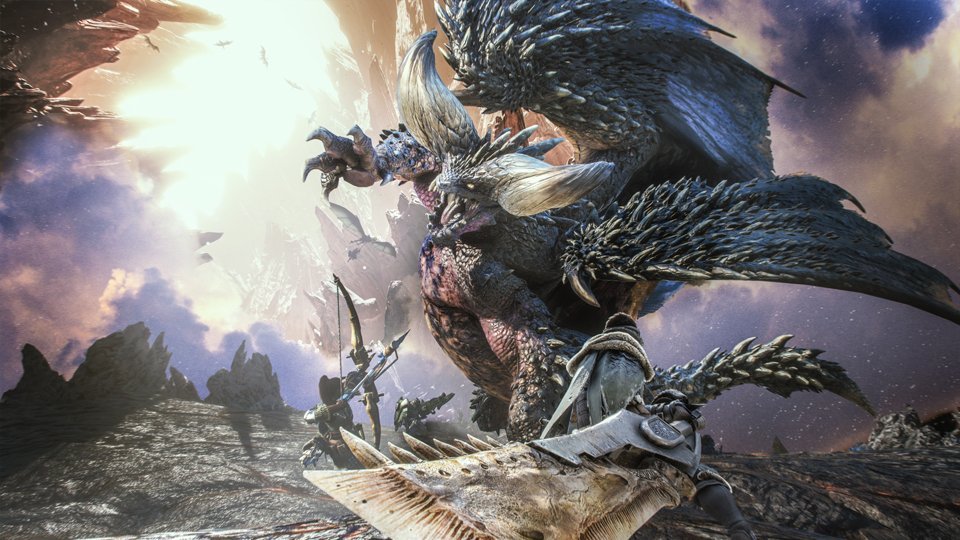 What about you? On the verge of a brand new year, after such a good 2017, are there any games you look back on that were only possible thanks to the friendships you made along the way?