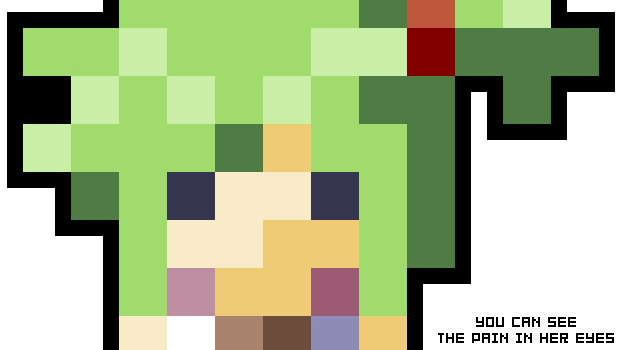 Last week, I was happily playing through Half-Minute Hero when all of a sudden, I did something very bad.

Naturally, a lot of evil can be done when you’re playing videogames. Some “normal” activities like bopping baddies or destroying their habitats can be viewed as bad when looked at from a different perspective. Some are bad simply because you are put into the shoes of a villain. There are some bad things that are completely optional, secret, or part of an achievement.

What I did this time didn’t fall into any of the above categories; I was tricked into doing the wrong thing. I didn’t see it coming, and it made it all the more effective.

WARNING! THIS POST CONTAINS HALF MINUTE HERO SPOILERS! If you own this game and have not completed the Hero 30 portion, please do yourself a favor and do it before reading the rest of this article. If you do not have the game, have no intention of playing it or just want to read about a really cool moment, read on.

Hero 30, the main game portion of HMH, does a great job of condensing the stereotypical RPG story into 30 second chunks of gameplay. In dong so, the game kinda works to desensitize you to anything that happens. All of the bad guys are somewhat silly and cut from the same cookie cutter shape. All of the “relationships” you make with friendly NPCs are just as brief as the allotted playtime, either ending with a single line of dialogue, an item exchange or an agreement to fight alongside you. Though there are a few recurring characters, there’s not really much there to make you feel close to any of them.

After the first dozen levels of slight variants of the “oh no an evil lord is going to destroy the world in 30 seconds” plot, I pretty much glossed over any text the game threw at me. I got to Chapter 29, the next-to-last level, and expected more of the same. After all, one shouldn’t expect any meaningfulness to be shoved into a half-minute long game that parodies the shortcomings of the RPG genre, right?

When I entered the world, the Time Goddess, a greedy but well-meaning deity who acts as your guide and mentor throughout HMH, sensed that something was not right. Nothing seemed immediately off to me. Yet another villain had been given the 30 second long spell of world destruction, and as the Hero, I had to walk around, talk to people and find out how to find and beat him.

I ran into a small, green-haired girl while trolling the first town for clues. When I tried to talk to her, she quickly became flustered and ran away. I wasn’t expecting to find the same girl being chased by monsters in the nearby forest not long after. After beating them all, she apologized for her previous behavior and gave me her name: Sasha.

From that point forward, we became good friends in what little time the game gave us. She took me to all her favorite places in the world, bought a meal for me, and even pointed out the way to the Reaper Lord’s castle. But something was amiss. After I beat him, the timer for the spell of destruction continued to count down. The Time Goddess again expressed her uneasiness toward Sasha. She suggested that I stay away from her. I didn’t listen, and met up with her several more times.

It turned out that the Time Goddess was somewhat right. The more I saw Sasha, the more she broke down. She finally admitted that she was not a human, but a monster put in a human body by the real Reaper Lord. She was supposed to waste 30 seconds of my time with relationship crap so that the spell of destruction could be cast. But his plan backfired; after spending all that time as a human interacting with other humans, she realized that she didn’t want him to destroy the world after all.

If I were to go and break the beach monument where she was “born”, the true lair of the Reaper Lord would be revealed. However, doing so would turn her back into a monster. Before she let me go, she had to ask me one last thing.

“Even if I don’t look like this anymore… even if we can’t communicate anymore… will you please… think of me as your friend?”

I had no reason to say no to her. Even if she did kind of lie to me to begin with, I knew she had good intentions now. She was the only person in the game who had more to say to me than “I’ll sell you this weapon!” or “I will fight alongside you!” I genuinely liked her because she was different, kind and slightly less one-dimensional than everyone else. So I promised her that we would always be friends, and I had every intention of keeping that promise.

I expected my choice to have some sort of impact on the rest of the level. Like, maybe when I was fighting the Reaper Lord, a monster would swoop in and help me finish him off. In a happy moment of realization, I would see the monster and think, “Aww, it’s Sasha! We’re still friends! Yay!” Then she would say her final goodbye and the world would be saved and everyone would be happy. I mean, if people I only shared two sentences with would follow me into battle, I could only imagine the tremendous amount of help someone I knew intimately could be.

On the way back down to fight the real Reaper Lord, you’re forced to go into Sasha’s hometown. There was nothing left of the shops that once stood there, and all of the people had changed into zombie-like creatures that immediately attacked me. But wait! The Time Goddess and I both sensed that little Sasha was one of these monsters. This was it! Something sweet was about to happen because I agreed to be her friend no matter what.

As I plowed through the other monsters in front of her, I realized that I couldn’t stop. I was equipped with a pair of cursed boots that I had gotten the chapter before, which disabled my ability to flee battle. I was headed straight toward her, but for whatever reason, my first instinct was to keep moving forward. I thought maybe a cut scene would start once I got close enough, I would stop attacking and everything would be alright.

That cut scene never happened. Numbers flew from Sasha’s body. I could only watch my character whack her with his sword until she fell dead.

It cut me like a knife. And to top it off, the game branded me a “Liar” for it.

Suffice to say, I wasn’t happy at all with how things turned out. I tried over and over and over again to keep my promise to Sasha, but kept on failing. Mind you, I was doing all this while on a bus trip, so I never figured out the right way to do it (by not holding down L and R to run away, but tapping them to hover in front of her for a few seconds) until I reached my destination and rushed to a computer to research it.

When I finally did it, it was a pretty hollow victory. I still had that “Liar” achievement to remind me of the horrible thing I had originally done. I still had the memories of how it felt to unintentionally betray my friend. There was no taking back something like that.

There have been many instances where videogames have touched my heart in meaningful ways, but none have come from doing wrong. I’ve poked innocent Cuccos in Zelda games and kicked defenseless Servbots around in Megaman Legends 2. I’ve sacrificed minions for health, armor and weapons in Overlord. I’ve accidentally run over innocent people in every open world game I’ve touched. But none of it really had any lasting impact on me.

This small moment from this small game caught me entirely by surprise. It left me feeling completely horrible, as a bad deed ought to. But it would have never happened had I been clear on what (and what not) to do in this brand new situation. The game had inadvertently tricked me into breaking my promise by making me too comfortable with the way things work within it and giving me a pair of cursed boots that ended up cursing me.

It’s usually a bad thing to say that a game developer has played a trick on you, but I’m actually quite grateful to Marvelous for setting me up like that. I wasn’t expecting to be moved by any aspect of Half-Minute Hero. I wasn’t expecting to do anything wrong while in the shoes of the Hero. And I wouldn’t have, if not for that promise.

I know you’ll never believe me, Sasha, but I’m sorry.