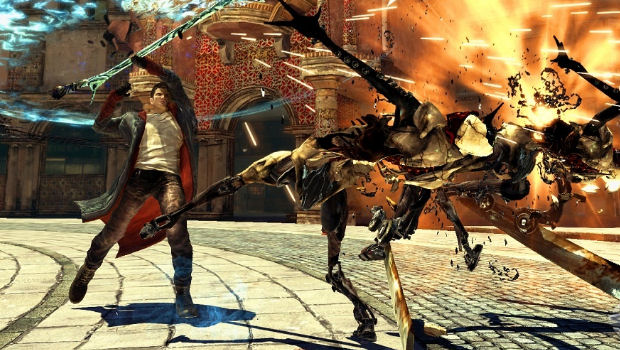 Dante fans have one more reason to arbitrarily hate Ninja Theory, with the studio claiming that DmC‘s Dante will be “more of a street brawler” in combat style than previous incarnations. I have no idea why that’s terrible, but I know it must be! BOYCOTT!

“Growing up in a situation where the demons are out to kill him; society in general, controlled by the demons, is out to crush him; growing up on the streets … So, he’s more of a street brawler,” said creative director Tameem Antoniades. “His moves are less refined than you would have seen in previous DMCs.”

Sounds good to me. What sounds better is the game’s music, which apparently responds to your in-game action. The better you do, the better the music gets: “The better you play, the more layers of music kick in, and if you get to the top ranks, then the screaming vocals kick in and it kind of affects you when you play, because you know you’re doing well.”

Yeah, I’m hyped for this game. Screw the haters in their tight little bumholes.