Vergil’s DLC is the highlight again

You’ve heard the criticisms for Ninja Theory’s take on Devil May Cry a million-trillion fucking times.

So let’s just dive into the Definitive Edition, shall we? 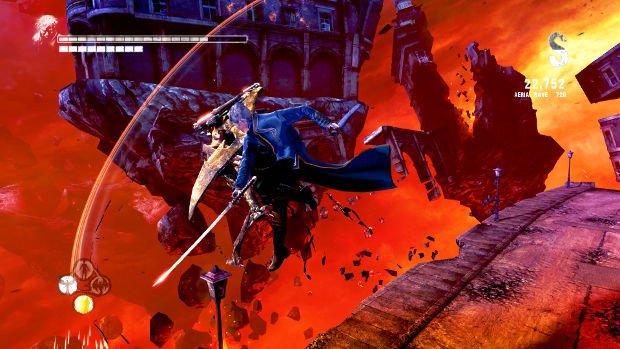 Yep, this is the same bad story and bad characters as the original — nothing substantial is changed on that front, except for the removal of Vergil’s fedora. Ninja Theory’s take on They Live was neat enough at first, but it quickly grew flat over the course of Dante’s stereotypical hero’s journey. I don’t need my Dante to have feelings or curse every five seconds — I just need him to be badass. Actions speak louder than words.

Having said that, aesthetically the game is as gorgeous as ever in 1080p and 60 frames per second. At long last the latter figure comes into play, and DmC is all the better for it. The club scene still stands out as one of the coolest-looking action sequences in recent memory, and the constantly shifting Limbo setpieces are seamlessly integrated into the platforming (although they overstay their welcome hours in).

So what’s different? Capcom has made a lot of adjustments to gameplay that core fans have wanted the entire time. For starters, lock-on returns to the series, and I for one am damn happy about it. It’s completely optional — if you think that lock-on doesn’t have a place in action games (you’re wrong), that’s cool, you can just not use the button for it. Since the original oddly had two buttons for dashing, it feels like it was always meant to be in there anyway and was cut for time.

Combat in general is vastly improved thanks to the 20% faster “Turbo” option. I recommend everyone immediately go to this checkbox and click it, since it makes the game much more fun on every level. Combat feels so much more fluid, challenging, and hectic — it’s like playing a new game. Chalk another win up to the modders, who Capcom got the idea from. The “Hardcore” modifier is another must-play, as it remixes enemy movements and subtly shifts frames around, creating a different experience than you’re used to in DmC.

Add on top of that the “Must Style” modifier (all three can be enabled at once, mind) that requires you to use combos of S rank or higher to even do damage, and you have a great combination. I don’t dabble in Must Style on a consistent basis, but I enjoyed levels more in general with Turbo and Hardcore on, especially on the higher difficulties. Speaking of difficulties, there are still eight of them, and in tandem with all the other options there’s plenty of replay value to be had.

This is particularly true since the Definitive Edition bundles in the Vergil’s Downfall DLC storyline, which I liked better than the core game. It removes all of the bullshit character growth and terrible dialog in favor of letting Vergil kick ass and accept his inner demon. Again, I love the touch at the end where his original skin is re-dubbed “Weak Vergil.” It really encapsulates what made Devil May Cry so special in the first place. 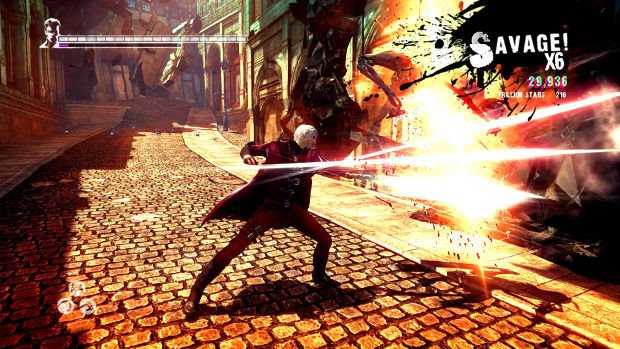 Keep in mind though that Vergil’s Downfall is only a scant few levels, and if you aren’t keen on replaying them over and over on higher difficulties, you’ll run through it in seconds flat. Vergil also now has his own Bloody Palace mode, but sadly it only supports 60 floors, not 100 like Dante’s. Still, each floor has more variety than the standard Palace, so it’s enjoyable — especially with Vergil’s skillset. For those of you who can never complete it in time, you can now disable the timer. A great touch for newcomers.

As far as the legacy of DmC goes, no one would argue that making Devil May Cry more accessible after four rather hardcore entries is a bad thing, but Ninja Theory failed to address the fans that made the series so successful in the first place. Take the Bayonetta franchise, two of the best action games ever made (outside of Devil May Cry 3). They allowed for systems that welcomed newcomers and provided a high skill ceiling. While DmC Devil May Cry: Definitive Edition‘s ceiling doesn’t reach nearly as high as the current queen, it’s a better effort than the original package, and does a better job of appeasing both types of fans.

I’m kind of torn on the “Definitive” concept given its price point, though. In many ways much of it could have been delivered in a free update (especially if there’s a PC version in the works, which hasn’t been confirmed yet), but if you haven’t already experienced DmC, getting this package at a discount would be the best way to do it.