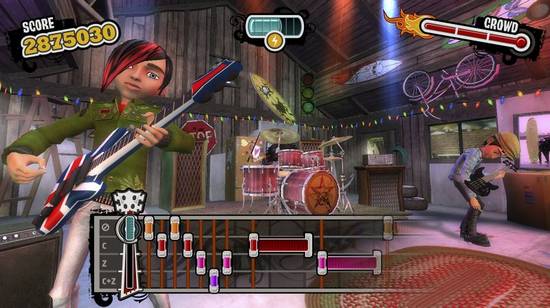 Attention kids, tweens, and teens! If the outrageous rock n’ roll lifestyle that comes along with the peripheral-based Guitar Hero and Rock Band are a bit too much for your virgin tastes, Disney has the answer. Naked pictures of that chick from High School Musi — wait, no! We don’t speak about that.

Introducing Ultimate Band, a rhythm-based music game being designed for the Nintendo DS and Wii. While no songs have been announced, Disney claim to be working with some of the biggest names in rock, alternative, pop, emo, and indie rock music. Of course, this covers everything from the Jonas Brothers to Hannah Montana. We hope.

While gameplay specifics for both versions haven’t been announced, each version will take advantage of the console’s specific strengths (waggle and touch, baby!). In particular, the DS version sounds pretty neat — gamers will be able to create their own original songs with the touchscreen and stylus to lay down tracks. Timbaland never had it easy.

BURBANK, Calif. – (February 27, 2008) – Disney Interactive Studios announced today, Ultimate Band, an all new music experience for fans of the Wii™ home video game system and Nintendo DS™.  Gamers and music lovers of all ages will realize their dream of becoming a rock legend when they build their own band or jam alone, all fueled only by the power of the Wii controllers and the DS stylus.  Disney is working with some of the very biggest names in rock, alternative, popular, emo and indie rock music, allowing band mates to play sets from a broad selection of current hits and all-time rock favorites. Friends and families can rock out on guitar, bass, drums or as the front man.

Working with leading London-based music consultants, Radial Music, Disney has chosen to combine familiar classics with today’s hottest songs in creating Ultimate Band – a product with global appeal across all age groups. Instantly-recognizable songs from classic rock to current hit singles will bring players together for endless hours of entertainment.

“Radial worked closely with Disney to compile the perfect song list for Ultimate Band,” said David Hill of Radial Music. “With iconic songs from every decade since the 60s, these games feature music for everyone.”

Ultimate Band, being developed by Fall Line Studio in Salt Lake City, UT, is slated for release during the 2008 holiday season. When Disney formed Fall Line Studio in November, 2006, Ultimate Band was the first project the team began building. Fall Line Studio’s focus is to develop Wii and Nintendo DS games based on new intellectual property, Disney brands (with Disney/Walden Media’s The Chronicles of Narnia: Prince Caspian on the Nintendo DS being its first release), and innovative new technologies such as DGamer which will provide a fun, connected game community for Disney video game fans.

Ultimate Band for Wii allows players to live the life of a rock star, by advancing their music careers and popularity from playing in a neighborhood garage to performing in front of an international audience at a world famous venue. Ultimate Band utilizes the innovative Wii Remote and Nunchuk™ to give fans the ability to play the drums, bass guitar, lead guitar, or take on the role of the front man.  Players can also create and customize characters that reflect their own unique personalities and attributes. Along the way, players will unlock new songs, venues, and accessories that can be used to customize their band members.

Ultimate Band for Nintendo DS is a rhythm-based music game with a built-in recording studio.  Players can jam to current and classic songs using the drums, lead guitar, bass guitar, or rhythm guitar. Players can also create their own original songs using the DS touchscreen and stylus to lay down tracks for each instrument and apply creative mixing effects. Ultimate Band for Nintendo DS will also include DGamer functionality which will allow players to engage with others in a secure online community via their DS (Wi-Fi or ad hoc) or computer.

Ultimate Band will be rated E10+ (anticipated) and available this holiday season for Wii and Nintendo DS.