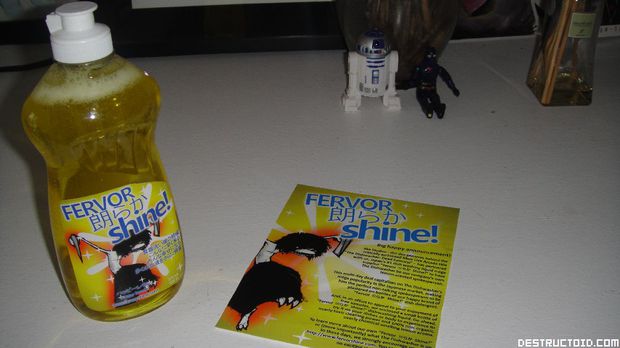 Ska Studios, the folks behind Xbox LIVE Arcade hack ’em up The Dishwasher (and the forthcoming XBL Indie title Charlie Murder) sent us dishwashing detergent in the mail.

The detergent comes as a teaser to an announcement, which is being counted down over at www.fervorshine.com. As of this writing, there are six days left on the countdown to… something. Our guess? A sequel to The Dishwashers, which that jerk Tom Morello spoiled for everyone, along with Halo Reach. See? A jerk.

Not convinced? Here’s what our Japanese translating robot (a.k.a. Brad Rice) came up with when looking at the Japanese text on the bottle:

It’s the sequel of washing food products!
It’s coming this early
and will make everyone happy!
Expect lots of blood to be shed

We’ll know more next week, and when we do, we’ll be sure to let you know. In the meantime, hit the jump to read the full text of the “Big happy announcement” — a fictional (?) cross promotion between Ska Studios and “Japan’s #1 dish washing liquid mega supplier, Fervor Shine!”

Ska Studios — the dev geniuses behind the critically acclaimed Xbox Live Arcade title “The Dishwasher: Dead Samurai” — has partnered with us, Japan’s #1 dish washing liquid mega supplier, “Fervor Shine!” to have The Dishwasher be our company’s own lemon-scented spokesperson

This mult-day deal capitalizes on The Dishwasher’s mega popularity in the Japanese market, making him the perfect non-talking spokespoersn to be plastered on bottles of our happy brand of “Fervor Shine” dish detergent.

And, in an effor to appeal to your enjoyment of free samples, we enclosed a small bottle of “Fervor Shine!” dishwashing liquid. Go ahead, try it on your dishes or body to experience its nearly toxic cleaning power and 100% non-organic overly chemical smelling lemon aroma.

To learn more about our own “Fervor Shine!” or (more importantly) what The Dishwasher is up to these days, we strongly recommend you visit: https://www.fervorshine.com. You can count(down) on exciting stuff waiting for you there!