Don’t call it steampunk. Or do, but it’s not meant to be.

Arkane Studios’ Sebastien Mitton gave a talk at GDC in which he revealed the warmly received Dishonored was originally set to take place in medieval Japan. Mitton continued, “We thought medieval Japan was not good for us because we do not know this culture.” The European developer did know its Europe, though, and so Dishonored soon came to resemble the amalgam of 16th/17th and 20th century London that fans would come to know and love.

There were a few other neat pieces of trivia that came out of the world building and art-heavy talk. The idea for the game’s recognizable stilt walking enemies that patrol on high actually came from window washers at the office who used stilts to increase their reach to clean higher windows. Additionally, the iron clad horses from early concept art would eventually be replaced by the electric, railed and cabled buggies that became the primary means of transport among the upper crust. This also added to the oppressively urban feel. The only animals heavily in the game are the insatiable, unstoppable plague rats and stupid fish flitting about untouched in the ocean.

Perhaps most interestingly, Mitton talked about artists in game development typically not having enough to do with actual game building and design. 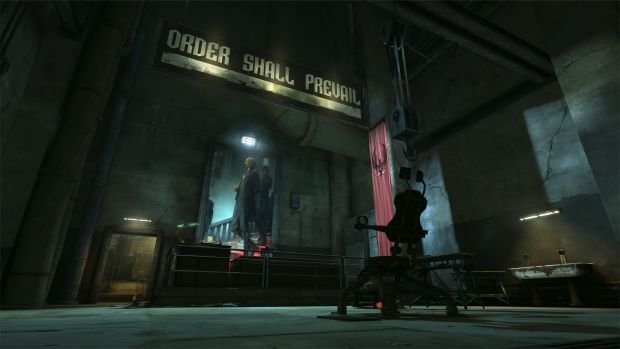 At Arkane, for example, they had architects working with level designers. Mitton talked about the need for specialists in certain fields to help tie all the elements together; he also chronicled Dishonored’s long planning stage on the artistic side. The team took trips to London to take architectural and facial references and did a heap of concept art before ever getting into making 3D models, at which point it would be clear just how characters would look.

Among the references used were the a lot of 16th and 17th century art work from the likes of Carl Spietzweg, Dagnan Bouveret, Daniel Gibson, etc.; early photography; plague records; and even English and Australian mug shots. A lot of the game’s technology came from trips to museums and looks at mechanisms, tools and prototypes of early artisans, though “the intention was not to do steam punk at all,” so be careful throwing around that generic label. Mitton also praised the structural nature and physicality of sculpting, citing something that 3D modeling lacks.

To aspiring — or currently practicing — artists, Mitton was firm: “Avoid photorealism. I want you artists to know what you’re doing.” He spoke at length about art being used to tell a story, like how the worn, tanned hands of a man in a painting help narrativize his life and give context and detail to the piece. “I want some backbone in everything,” he continued. This direction shone through brilliantly in Dishonored’s idiosyncratic, wonderfully realized world, so something is definitely paying off. The stylized art direction shows off so much more than a facile attempted replication of every real life facial muscle twitch.